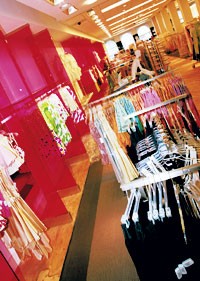 NEW YORK — With its SoHo store just nine days away from opening, Bloomingdale’s is putting its reputation for delivering what’s cool and cutting edge on the line like never before.

The store represents the retailer’s first attempt at creating an apparel specialty store skewed to contemporary and young designers, denim and some bridge offerings. Styles and merchandising concepts seen downtown could be rolled out to other future or existing locations, Bloomingdale’s executives said.

It’s a store of contrasts, evident in an exclusive sneak peek this week. The modern elements Bloomingdale’s is best known for, like the checkerboard marble B-way, niche brands and advanced denim and sportswear, are set amid the aged brick walls and cast-iron columns supporting the two 1862 factory buildings that make up the store. Not to mention the high-tech plasma screens and theatrical spotlighting, which offset the tin ceilings, exposed pipes and the resealed pitted oak floors.

However, retaining the historic downtown character of the site was important to Bloomingdale’s, which is stressing that it wants to blend in, and not steamroll its way into the community. As Bloomingdale’s chairman and chief executive Michael Gould said, “We hope it will become a neighborhood store with assortments that are very, very distinctive, edgier and more contemporary than our uptown store and appealing to the uniqueness of not just SoHo, but the West Village and the rest of downtown. It really has to be part of the downtown milieu, and it feels like a specialty store even though it has 90,000 square feet over six levels.”

“Everybody is looking at us because of the location, and because a lot of other stores and vendors are interested in how Bloomingdale’s is going forward,” said Kal Ruttenstein, senior vice president of fashion direction. “We had to come up with exciting, cutting-edge, salable products with great values.”

The store’s official ribbon-cutting will be on April 24, preceded by an invitation-only opening for preferred customers the day before. In between, there’s a battery of events, including press tours, vendor tours, parties and a blitz by employees to blanket the community with posters and chalk art on the sidewalks, all bearing the Bloomingdale’s logo and a new slogan for the store, “Happening in SoHo.” Two Volvos wrapped with the slogan are driving around the city through April 24, and teams of employees are walking around SoHo in Bloomingdale’s T-shirts giving out snap bracelets, postcards and wristbands. “It’s guerrilla marketing,” a Bloomingdale’s public relations executive said.

One way or another, Bloomingdale’s is bound to have a huge impact on SoHo, which for several years has been marked by busy shopping weekends and noticeably thinner traffic on weekdays. Considering its broader range and larger space than any other fashion store in the neighborhood, Bloomingdale’s is expected to be a destination. Time will tell whether nearby boutiques benefit from its drawing power, or succumb to its promotional might and aggressive pricing tactics.

Right after entering the front doors at 504 Broadway, formerly occupied by Canal Jeans, the perspective is broad. There’s a 50-foot-high, three-story atrium to the tin ceiling and a block-long view past the pink cosmetics treatment bars to the windows on the Crosby Street side of the store. Most of the cosmetics booths are uniformly designed, rather than being branded.

“This is a very typical loft building. We tried to keep the flavor and its whole integrity,” observed Jack Hruska, senior vice president of visual merchandising and store design. “It’s a mix of the old and the new, but it wasn’t as easy to build as you might think. There were some surprises. Some of the brick wall was falling down.”

Industry sources estimated that the store cost between $30 million and $35 million. Hruska declined to comment on the construction costs, but noted the infrastructure work was extensive, including building escalators, fire escapes and fire exits, new air conditioning and heating, and of course, some wall repairs. The store is shaped like a big, thick T, with the Crosby Street side wider than the Broadway side, and therefore where the escalators were installed. The store is seen generating about $500 in sales per square foot, or roughly $45 million in annual sales.

Despite it’s verticality and smaller-than-usual footprint for a Bloomingdale’s branch, the SoHo unit is open and bright with skylights and floor-to-ceiling windows on both sides, except for the lower level housing men’s wear. The spacious feeling is created through two- and three-story atriums and pass-throughs under brick arches as well as wide openings in the walls that permit looks into the areas for shoes, handbags and contemporary sportswear.

On the second floor, there are shoes, handbags and gifts housed on thick wooden shelves and table displays with lamps for a more residential feel. Handbags from Chloé, Moschino, Judith Leiber, Versace, Sigerson Morrison, Lulu Guinness and Celine are featured. Cafe 504 is also on two.

More than any other floor, the third floor for denim and Y.E.S. contemporary sportswear recalls the 59th Street flagship’s contemporary floor. Both are decorated in ice-blue paint and with tall photographs of New York icons, such as St. Patrick’s Cathedral, mounted on “lightboxes” illuminated from inside. Among the 12 to 15 denim labels that will be in the store are Citizens of Humanity, Seven, Rock & Republic, Juicy, Miss Sixty, D&G, C&C and Notify, a line designed in Paris and manufactured in Italy. There’s also Evisu denim from Japan.

The fourth floor features such bridge lines as Elie Tahari, DKNY, Eileen Fisher and Lafayette 148 in a more neutral setting of big black-and-beige striped area rugs with wood paneling. There is also a separate Marc by Marc Jacobs presentation.

Floor five features young and upcoming designers in “Paradox,” including Zac Posen, Jeffrey Chow, Matthew Williamson, Derek Lam and Lela Rose, and “Elements,” with such resources as Rebecca Taylor, Sass & Bide, Diane von Furstenberg, Thomas Burberry, Anna Sui, Twinkle, Lagerfeld Gallery and Kulson, all separated by vivid pink glass. There is also a big Theory shop, fixtured with 8-foot-high panels lit from the back and extended off the wall for a floating effect.

After months of shopping stores downtown and doing market research, Ruttenstein said, “We decided to go with our gut instincts,” which boils down to throwing some fashion curves. They include a comprehensive jeans presentation that’s “more Gwyneth and less Jennifer,” as Ruttenstein put it, referring to jeans being higher waisted, less midriff-bearing and generally more sophisticated and subtle in appeal, compared with the proliferation of racier, sexier styles seen all over the streets and clubs.

The store is also opening with a strong collection of knee-length pencil skirts in pinstripes and bright colors, paired with stretch cotton shirts, which Ruttenstein called the new uniform. “That is the look of fall of many collections, but rather than wait, we decided to ask certain designers to do some for us now,” he noted. Theory and Zac Posen are major suppliers of the look, with Theory’s pencil skirts in cotton blends, priced $200 to $220, and Posen’s silk charmeuse pencil skirt priced at $700.

Bloomingdale’s is also racing ahead of the calendar with a collection of fur accessories, including boas, collars and cuffs, which would normally be broken out for fall. Adrienne Landau and Fox Unlimited are major suppliers.

In addition, Ruttenstein said that Bloomingdale’s decided to offer the SoHo customer “items in more subtle neutrals that go beyond all the bright colors we’ve seen all over, to wear now right through the fall.”

“We think that part of our heritage is making things quick and fast, and hopefully better than our competition,” Ruttenstein said.