Bloomingdale’s is readying its SoHo store with a contemporary, young designer and bridge slant, tailoring the unit to the neighborhood. 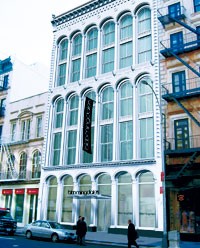 NEW YORK — Bloomingdale’s in SoHo is still one big empty hulk, with little to see other than the duct work, some Sheetrocking and plenty of dust. But the floor scheme is set, many American and European designers have committed their collections and are creating exclusives, and most important, a definite opening date is settled: April 24.

The mission and merchandise slant have been established for the six-level, 140,000-square-foot store, with 90,000 square feet of selling space. Not since the year 2000, when H&M opened a flagship on Fifth Avenue for its U.S. debut, has there been such curiosity in the city surrounding an upcoming store.

For Bloomingdale’s, it will be a laboratory for merchandising concepts and perhaps even a model for future, scaled-down stores. As the retailer is aware, the mature department store sector must tackle new formats off the mall to grow, or risk extinction. Bloomingdale’s has already become more specialized in a handful of locations. Home stores operate in Chicago, Las Vegas, Newport Beach, Calif. and Chestnut Hill, Mass. and apparel-only stores are in Chestnut Hill and Newport Beach.

“It’s an incredible retail opportunity, being in SoHo,” said Michael Gould, chairman and chief executive officer of Bloomingdale’s, in an interview late last week. “It will be a very different and very exciting shopping environment, with the kind of pizzazz and pulse Bloomingdale’s is known for. We are putting businesses down there that are hot.”

Uptown, Bloomingdale’s has high productivity, north of $900 in sales per square foot. As previously noted, the SoHo store is seen posting 50 to 60 percent of that, or about $450 to $500 a foot. With 90,000 square feet of selling space — 15,000 per floor — Bloomingdale’s SoHo should yield $45 million to $50 million in annual sales. The store, at 504 Broadway, is about half the size of a typical Bloomingdale’s branch. The site previously housed Canal Jeans.

“SoHo won’t be a full-range store,” explained Kal Ruttenstein, Bloomingdale’s senior vice president of fashion direction, who is currently in Europe scouting merchandise for SoHo, while attending this week’s Paris couture shows. “It’s a young, forward-thinking store with exciting merchandise with a contemporary bent, including several European collections, a lot of American collections and a lot of merchandise we have developed exclusively. The main thrust is contemporary clothes, young designers and bridge, for women and men.”

Marc by Marc Jacobs, Juicy Couture, James Perse, a new California cotton knit line C and C, Citizens of Humanity, See by Chloé and Sass & Bide, as well as some new denim lines such as Chip & Pepper, are among the contemporary collections to be displayed on level three. The floor will reflect the mood and merchandising of the second floor for contemporary clothes at Bloomingdale’s 59th Street flagship.

Level four will have some of Bloomingdale’s best-selling brands including Tahari, Theory, DKNY, and Aileen Fisher.

Five will sell young designers, including Zac Posen, who is creating exclusive items that go into summer and early fall, as well as Matthew Williamson, Derek Lam, Esteban Cortazar and Vasseur Esquivel. There will also be intimate apparel and a 48-seat restaurant called 504.

The first level will house cosmetics, fine and fashion jewelry, a John Hardy fine-jewelry boutique and a perfumery with the mood of a French boudoir.

On two will be women’s shoes and handbags, a coffee bar and an electronics shop with the latest gadgets such as Apple iPods, Casio cameras and Sony products. Among the accessories will be Cesare Paciotti shoes and handbags by Philip Treacy.

The lower level will house men’s wear, including Viktor & Rolf, Marc by Marc Jacobs, Theory, Pringle of Scotland, Hugo by Hugo Boss, and an array of modern suits from resources such as Ted Baker from London and Z Zegna.

There will also be a major better-priced denim presentation, with items in the $130 to $230 price range; a couple of home shops featuring collectibles and gifts from artisans, private label cotton knits at the outset, and into fall, private label cashmeres; a 2,000-square-foot “laboratory” space for testing new contemporary men’s wear products; a coffee bar that seats 22, and a food shop. One exclusive label will be Thomas Burberry, a secondary line from Burberry that features denim, knitwear and outerwear, and is not based on the classic Burberry plaid.

Gould acknowledged that many of the lines to be sold, such as Marc by Marc Jacobs, already have stores in SoHo or are sold in other stores in SoHo, such as Scoop or Barneys Co-Op. Specialty stores are expected to feed off the traffic from Bloomingdale’s SoHo, but they will be severely tested by the promotional and merchandising might of their new neighbor.

“All of our resources for the most part are down there,” Gould said. “But the questions become, ‘How do we present them with a Bloomingdale’s twist? What’s going to be the gestalt, with five floors plus a men’s floor by itself ?’”

Gould believes some customers prefer to shop department stores, others prefer boutiques, and both groups come to SoHo. He also believes there are residents downtown who shop Bloomingdale’s on 59th Street, but that the amount of business SoHo will swipe from that location will be minimal. “I do not think there will be a major cannibalization,” Gould maintained.

Bloomingdale’s searched for a second Manhattan site for years. It considered Columbus Circle, where Time Warner is opening up a retail and entertainment complex next month, and there was speculation about opening an annex on the site of the former Alexander’s, between 58th and 59th Streets, where a new building has gone up and Bloomberg News and H&M are moving in. With the SoHo opening, Bloomingdale’s joins the small club of apparel retailers operating more than one big box in Manhattan, which includes Kmart, H&M and Gap.

While the cast iron columns and wood floors of the SoHo site have been retained and are getting restored, plenty of construction has altered the structure. Brick walls have been cut out to create pass-throughs between departments and overlooks to different floors. A mezzanine was ripped out to further open the environment, and expose windows to brighten the space. Some walls will be covered with glass inset with plasma screens. An escalator is being installed, and a new vestibule on the Broadway side creates a gracious entrance.

A checkerboard black-and-white marble floor will cover the 8,000-square-foot cosmetics department, which will be filled with soft pink makeover stations.

Overall, the footprint is like a big thick letter T, with the Broadway side 44 feet wide and the Crosby Street side about twice that. Both sides will have entrances. The location, just south of Spring Street, is composed of two buildings dating back to the early 1800s.

“This is among the most difficult projects we’ve undertaken, along with the Medina Temple home store,” said Jack Hruska, senior vice president of store design and visual merchandising. Building the Medina unit in Chicago was complicated because it involved converting a theater. In the case of SoHo, “We are mixing into an old factory building eclectic materials, like glass partitions and lacquered walls,” Hruska said. “It’s way more eclectic than past stores. It’s a mix of the old and the new.”

Asked whether Bloomingdale’s in SoHo is potentially a model for future stores, or more of a one-shot reflecting a real estate opportunity, Gould replied: “It’s a combination. No question the uniqueness of this site and the opportunity of this location at this moment in time is really very, very special. However, there are things that we can learn from in SoHo and customize that have the potential to be applicable elsewhere. I don’t think SoHo is a model, in the totality of it, though it will talk to us about how far we can push the upscale contemporary elements of our business. There are things that we have been learning about in our main store, and in all our stores as of this past fall. But SoHo will push us faster and deeper.”

Launching a new format in a highly visible location could create more than the usual amount of pre-opening jitters. “I don’t feel a lot of pressure, but any enormous opportunity has its risks,” Gould said. “This is not about a place that should have more advertising, or that will be lacking for traffic. It’s about product and the associates. Those are the key issues. Architecturally, it will be a great success. The building will be exciting to visit. The true success will be how great the assortments are, and we will win on the quality of our staff.”

The $2 billion Bloomingdale’s also has a running start, considering its successful 2003. It performed the best among all of the divisions of Federated Department Stores and reportedly came close to matching the double-digit gains seen at Neiman Marcus.

For more than a year, Bloomingdale’s has been on a roll, executing a strategy of selling a higher degree of contemporary, bridge, upscale and less widely distributed merchandise, and keeping those price levels consistent across ready-to-wear, accessories, cosmetics, men’s and home, and competing more directly against Neiman’s, Saks Fifth Avenue, Nordstrom and Barneys.

Originally, a fall 2003 opening for SoHo was envisioned. However, some building code issues and plan revisions pushed things back. “Rather than rush it, we want to make sure we get everything right,” Gould said. “This is one of our most challenging projects ever. Maybe opening four stores in California in eight days [in 1996] was more challenging, I don’t know. But from a point of view of the media, Wall Street, the attention from the market, it’s a big challenge. Perhaps it’s our biggest. The market is here and this where all the retailers in the country and the world come to see the latest. A lot of people are going to look at SoHo.”