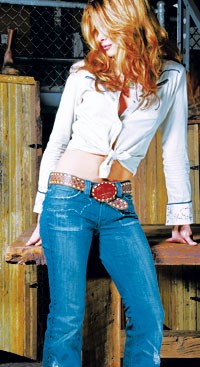 A co-founder of the Sasson jeans brand is rolling out the Antik and Taverniti So Jeans lines for early spring and has acquired the worldwide master apparel license from Elvis Presley Enterprises Inc., tapping into the craze for vintage rocker T-shirts and merchandise. Guez saw Sasson rocket to success in the late Seventies, but lost control of the brand after a bankruptcy proceeding in the late Eighties.

Guez said his firm, Blue Concepts, which operates as an incubator of fashion brands, is on track to bring in $30 million in revenues in 2004. With the new lines, sales should exceed $50 million next year.

To illustrate the power of the Elvis deal, Dolce & Gabbana had to get Guez’s approval before it presented a T-shirt of the rock legend at its fashion show last week.

For now, Guez is seeing how the new brands hold up alongside Blue Concepts’ existing labels: Yanuk, U, Duarte Jeans and Rick Owens/Slab.

“I have to pause and really digest what I have on my plate,” he said.

Guez said he relishes the challenge of building brands, rather than simply providing product to retailers. That’s what he does with his other firm, Azteca Production International, which he owns in partnership with his brother, Hubert. Azteca is a 13-year-old firm that produces for Tommy Hilfiger and Calvin Klein.

The siblings also own a stake in the publicly traded Innovo Group. Its wholly owned subsidiary, Innovo Azteca Apparel Inc., bought Blue Concepts’ customer lists and purchase orders for $21.8 million last year. While Guez owns a stake in all these companies, they are legally independent from each other.

The strength of the Blue Concepts venture is the autonomy designers receive, Guez asserted. Blue Concepts provides the back-end support for the fledgling labels to enable the product to flourish and attract customers on the front end. The team at the Commerce, Calif., headquarters provides the resources for sample making, shipping, production and sales. At the same time, the designs have to pass muster with Guez, a transition of sorts for designers who had been accustomed to carte blanche sketching.

“Here it’s about making sales and sometimes that’s not what you’re thinking about when you’re designing, but that’s what makes it challenging and where I’m having the most fun,” said Henry Duarte, who designs the Duarte Jeans line for Blue Concepts.

The formula appeals to retailers eager for new ideas, but wary of the potential production snafus and failures that are a part of dealing with independent new designers. Proper and consistent fit is a top-of-the-list concern with buyers who often have to rely on samples to place their orders.

Jen Rossi, buyer for Planet Blue in Malibu and Santa Monica, Calif., said when dealing with Blue Concepts, “You’re always guaranteed to have a product come in with a good fit because of the experience of the operation. At the same time, if there is a problem, they already know you’re a customer who’s there for the long run if products need updates.”

Guez, who was born in Tunisia and has French heritage, lately is focusing on French designers.

Antik is designed by the French duo Alex Caugant, a former designer for Goa and European juniors giant Chevignon, and Philippe Naouri, an antique denim specialist and former consultant for Diesel and Replay.

Their collaboration, crafted from Japanese fabric, is a fusion of old and new. They take antique pieces of denim, dating all the way back to 1900, and patch on pieces haphazardly to the new jeans, giving the product a raw, unfinished feel. Styles range from a Western flare with a double rear yoke to the straight leg and a flower-patched jean called “Woodstock.” A limited-edition “Cher” piece is made with only antique denim scraps.

Shipping in November, jeans from Antik wholesale for $79 to $160. Overall, the brand is expected to fetch $10 million to $15 million in sales its first year, Guez said.

Taverniti So Jeans is a sportswear collection from another Frenchman, Jimmy Taverniti, who also sells Taverniti Couture. Known for his garment-dying and stonewashing techniques, Taverniti, who works with Guez’s son-in-law, Gregory Abbou, has focused on jeans, T-shirts, sweatshirts, sweatpants and stretch silk tops. The denim banks on its vintage appeal, whether it’s the baggy, masculine pants, the trouser or the skinny “Marilyn” jean.

Many of the vintage effects are created through laser treatments. Key pieces in the line include sleeveless, zip-up hoodies, sweatshirts with cut-outs and T-shirts with an allover print. Wholesale prices for the line range from $70 to $120.

The Elvis project offers the greatest potential, Guez said. It allows access to more than 40,000 images of the cultural icon, who died in 1977. Guez is projecting sales of $20 million to $30 million in its first year.

“All of my designers want to contribute and do something with Elvis,” Guez said.

He plans to launch two lines for fall 2005: One for the moderate market, targeting souvenir stores and mid-tier chains, with wholesale prices of roughly $20 to $30 — and another that embraces vintage looks with lots of denim and leather, wholesaling for beyond $50.