BERLIN — Claudia Kleinert is Berlin’s baby-doll queen. With her lingerie store and loungewear collection, both called Blush, the 36-year-old designer is finding success in her effort to get peers into something more flirtatious than... 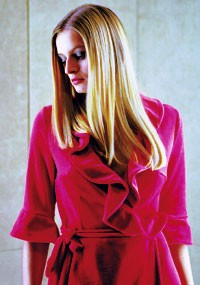 BERLIN — Claudia Kleinert is Berlin’s baby-doll queen. With her lingerie store and loungewear collection, both called Blush, the 36-year-old designer is finding success in her effort to get peers into something more flirtatious than T-shirts when they turn in for the night.

Kleinert’s tiny den of a shop, which she opened three years ago on Alte Schönhauser Strasse in the city’s trendy Mitte district, gained fame not just for her nicely naughty sleepwear collection, but for a breathtakingly hideous Seventies bed — in olive green plush — that took up half the boutique’s floor space.

Recently, she moved into more spacious quarters a few blocks away, on Rosa-Luxemberg-Strasse. And though the bed did not follow, a new one has taken its place: a huge circular model, featuring white leatherette and mirrors. The 600-square-foot store’s kitschy, retro mood is further enhanced with walls papered in a striped, black lace motif; sheer black negligee curtains on the windows; round purple throw rugs; a white Sixties TV; little furry pillows; a rattan throne chair, and throw pillows sporting risqué prints scattered on the bed.

For Kleinert, memorably awful beds have almost become a sideline. “I’ve bought lots of bedroom sets in Berlin,” she said. The olive bed was quickly snapped up by an afficionado, and Kleinert usually has one or two “finds” for sale in storage. But sleepwear, homewear, beachwear, intimate apparel and all the trappings — including Clou Underwear Shampoo, Woods of Windsor perfumed drawer liners, Blush chocolate-bar bubble bath and a reprint of the Twenties manual “How to Make Love” — are her real stock-in-trade.

A native of Germany, Kleinert got her fashion start in 1994 with an internship with Adrienne Vittadini in New York. From there she moved on to Puma, where she developed a kids line, then to men’s streetwear label Homeboy, where she helped develop a girls’ collection.

When she moved to Berlin and had two children about a year apart, it was time to bid farewell to the industry’s 16-hour work days. She decided to set up shop on her own. “Fabric, ruffles and lace have always been my thing, and I wanted to see how a store for baby-dolls and other playful sleepwear would work,” she said. “There was nothing [for sleepwear] in Mitte, and I’d always had a vision of a nightwear store that looked like a bedroom.”

From the outset, Kleinert has designed and produced Blush nightwear and loungewear, and sold underwear and intimate apparel from brands including Malizia, Fifi Chachnil, Princess Tam Tam, Blumarine, Huit, Sabrina Nadal and Oscalito. Typical Blush looks include short, ruffled bathrobes in polyester and nylon satin styled like wrap dresses, priced from $215 to $240; short hooded terry robes that can double as dresses, $240, and two-piece terry “home suits,” sold as separates for $85 (tops) and $95 (pants).

Still, Kleinert maintains that great customer service is as essential as great merchandise “We have 750 names on our customer list, and we take special care of them,” she said. “They receive postcards when something new comes into the store, and our business lives on special orders and requests.”

Kleinert also is building her wholesale business. She started selling to like-minded stores a year ago, relying on word-of-mouth for sales rather than participating in trade fairs. Her retail accounts include Slips in Munich and Tekinoktay in Copenhagen for the collection produced primarily in Berlin, with bits outsourced to Greece.

And speaking of production, Blush’s sexy offerings seem to have an interesting effect on Kleinert’s staff. “We’ve had four pregnant salesgirls in three years, and a lot of our customers are pregnant, too,” Kleinert said. “I’m delighted for them, of course, though it’s not so good for business, as the customers generally don’t come back for two years.

“But somehow it all works,” she said.