The designer expects to make 20 outfits for the singer's upcoming concert tour. 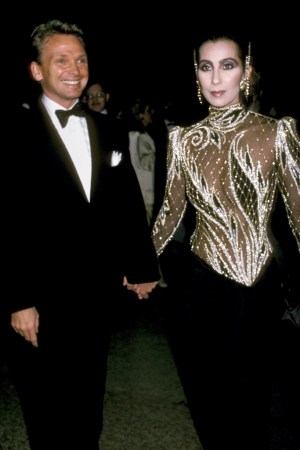 Years after Bob Mackie first sewed a sequin for Cher, the pair have reunited for what is expected to be her farewell concert tour. Mackie first met the singer in the late Sixties, when she admired something he was working on backstage at “The Carol Burnett Show.”

“It was 1967 and I was working on a loose thread on a beaded gown and Cher came over and said, “‘Oh, someday I’m going to have one of those,’” Mackie said. “And we became friends after that.”

This story first appeared in the August 21, 2013 issue of WWD. Subscribe Today.

Before Sonny and Cher’s nightclub run, she approached Mackie about dressing them, but money was a little tight for the couple and the designer was eager to take a vacation, so he set them up with a friend. But it was only a matter of time before their schedules and finances were in sync. And the experimental factor hasn’t waned for Mackie over time.

Mackie and Cher have yet to brainstorm about what she will wear for her next tour, but this time around he expects to make 20 outfits. There’s no need for backup looks. “When you change that many times, you don’t wear any one thing for very long,” Mackie said. “And it’s not a big dancing operation here.”

As for whether this will be the farewell tour for Cher (who has gone this route before), Mackie wasn’t about to say. “I am not going to comment on that one,” he said. “I don’t think that anyone should ever have to say this is the final anything. That’s just up to what happens with life.”