Inspired by photos of Egungun masqueraders, Bobby Kolade offered a free-wheeling mix of tailored precision, bravado and multicultural references in his spring collection. 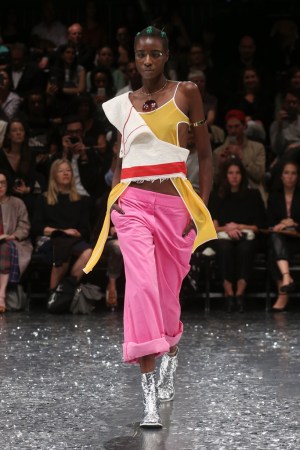 Nobody could accuse Bobby Kolade of playing it safe. His free-wheeling mix of tailored precision, bravado and multicultural references has made his show one of the hottest tickets during Mercedes-Benz Fashion Week Berlin. And boy did he mix things up for spring.

While not one to broadcast references, the German-Nigerian, Uganda-raised designer said before the show his starting point was Benin photographer Leonce Agbodjelou’s portraits of Egungun masqueraders. Specifically, he was inspired by depictions of their costumes covering every part of the body and dating back to a tradition from the 14th century. At the opposite end were bare-it-all Nineties pop stars such as Lil’ Kim and Aaliyah. And while Kolade is no Stones fan, there was a lot of Jumping Jack — or shall we say Jill — Flash to those silver-foil platform boots.

Having some fun was at the heart of it all. Thus a crisply tailored blue wool double-breasted jacket appeared literally cut in half, the left side attached to a silver glitter jumpsuit. Proper white cotton shirts or vibrant laser-cut ones sported brash snap buttons and one sleeve that flapped open, like a cape. He transformed the sleeve of a traditional African boubou (or long men’s robe) into a cropped, one-sleeve top, which when flipped upside down did double duty as a dress. He also revamped the boubou for mischievous young women in a shiny synthetic red parachute fabric.

His tonal combinations defied anyone’s color theory, his pants flared into the Seventies and his little panel skirts looked cheerleader-ready. Sheer Benin festival robes covered one gender-blended body, and overall, there was a lot to tie, wrap or leave half-open. According to Kolade, you should play with your clothes.