LOS ANGELES — Marc Bohbot’s 70,000-square-foot nondescript headquarters is a busy place these days. Head-high stacks of cardboard boxes stuffed with clothing create a maze in his office — a high-ceiling room furnished with red... 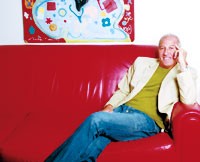 LOS ANGELES — Marc Bohbot’s 70,000-square-foot nondescript headquarters is a busy place these days. Head-high stacks of cardboard boxes stuffed with clothing create a maze in his office — a high-ceiling room furnished with red leather sofas and chairs and a 61-inch Panasonic computer screen.

“I only watch one hour of TV a day and use the computer 12 hours a day, so I figured I’d have a large monitor and a small television set,” Bohbot said.

The rest of his day is spent perfecting his True Meaning line and growing the reach of Bisou Bisou outside of the U.S. Lucky for Bohbot, the ventures are proving successful in their new forms.

Six months ago, contemporary line True Meaning wasn’t even two years old when Bohbot figured he was striking out with the collection of pants, jackets, skirts and camisoles, and decided to focus only on jackets and a handful of camisoles and T-shirts. So far, the 30 to 40 fitted looks in bouclés, ginghams, and jacquards — “the new jean jacket of the day” he believes — have amassed an account base of 250, including Nordstrom, Traffic and Lisa Kline in Los Angeles, Blue Bee in Santa Barbara and E. Street Denim in Highland Park, Ill.

“The Eighties were about the suit, the Nineties were about sexy, tight clothes and the year 2000 and beyond is about jeans and T-shirts and ways to give them updated looks,” said Bohbot, himself an example of the modern-day wardrobe in his Paper Denim & Cloth jeans, an H&M green T-shirt and a concrete-colored Prada jacket.

He’s promoting the look in ads, which are in the September books of Elle and Marie Claire, along with four billboards in Los Angeles on key streets such as Sunset Boulevard in West Hollywood and on La Cienega Boulevard near the Beverly Center mall.

Current sales are expected to double in the next two years with the help of licensing deals for accessories, which he believes is a key growth area for contemporary lines. True Meaning just inked a jewelry license with Robert Rose in New York for a spring collection, featuring antique-styled necklaces, earrings and brooches in gold and silver with contrast stones. Two seasons old, the shoe business, licensed by New York Transit, got a lift for the spring season with orders for mules, wedges and flats from Macy’s East, Burdines Macy’s and Dillard’s.

Bohbot doesn’t believe it’s a risk to follow such a narrow direction, since jackets are a constant and he predicts in the next 18 months suits will stage a comeback. Picking the most expensive garment in the wardrobe also helps. At wholesale price points of $75 to $120, orders in the thousands of dollars can quickly add up, he said.

“We’re in an item business today,” said Sandy Richman, principal at retail buying office Directives West. “He [Bohbot] is very focused and he’s managed to get what is hot at really great price points. If the cycle changes, he’ll just change with it.”

Change is nothing new to Bohbot who began contemporary label Bisou Bisou in 1989 with his wife, Michele, filed for Chapter 11 protection for its retail operation in 2002, and then signed an exclusive licensing pact for its U.S. distribution with J.C. Penney later that year.

It’s a deal that has grown from sportswear, dresses, denim, activewear and swimwear to a collection including handbags, accessories and shoes sold at 550 doors.

“I’m very, very happy with the growth there,” he said. Six months ago, he signed a distribution deal for Bisou Bisou in Panama for all of South America, and in the works is a deal for Canadian distribution. One unknown is what happens to the Bisou Jeans label. The brand still exists, Bohbot said, but its direction is undecided.

One growth opportunity Bohbot shudders at pursuing is retail for the True Meaning concept. “I failed terribly at retail,” he said, raising his hands in mock self-defense. “But what I love about this country is that everyone is allowed to make a mistake and it doesn’t stop you from success.”