Spring was in the air at two trade shows in Manhattan, the venerable Fashion Coterie and newbie The Train New York. 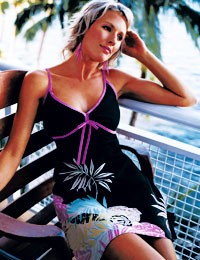 NEW YORK — The showers that drenched the East Coast this week are slightly reminiscent of spring, but the brighter side of the season was clearly evident at two trade shows that wrapped up this week: The Fashion Coterie, a fixture of the fashion business, celebrated its 18th year, while a newbie, The Train New York, marked its debut.

The colors, floral prints and bright beads throughout Fashion Coterie made it easy to forget about the dreary weather.

This year, the Fashion Coterie, produced by ENK International, welcomed 12,000 retailers and about 1,000 exhibitors over the three-day period, wrapping up today. “We were very pleased with the traffic turnout despite the rain,” said Elyse Kroll, executive director of ENK. “The criteria for exhibitors has been quite similar through the years,” she continued. “We look for quality, design point-of-view and craftsmanship. We try to avoid redundancy.”

While the show occupies Piers 90, 92 and 94, the competition to get into Coterie is “out of control,” commented one spokesman.

Labels such as Tori Richard brightened the space with its Honolulu-inspired floral prints and bright colors such as kiwi, strawberry and hot pink. The line wholesales in the range of $12 to $70 and retails at specialty stores across the country.

The Brazilian label, Coven, marked its return to Coterie with knitwear inspired by the rain forest and birds. Peacock blues and greens were among the notable hues, as well as styles such as balloon skirts and shorts. “We have big expectations for this show,” said the designer, Liliane Rebehy Queiroz.

Beyond the floral and bright prints, embroidery, tunics and bohemian-chic looks ruled the piers. John Eshaya, a buyer from the California boutique Ron Herman, said he was seeking “Malibu hippie-girl” looks. Vanessa Witke, designer of the Toronto-based label Ibisco, adorned her sheer tanks with tiny, glittering beads, or “sprinkles,” as she called them. Her line wholesales in the range of $69 to $159. “We’re always coming up with new ways to reinvent timeless pieces,” she said, holding up a cotton and nylon slim-fitting pencil skirt in classic white.

Edan Scott Goldenberg, a buyer for Macy’s, said, “Business is getting stronger and the contemporary market is where it’s at in terms of newness.” He liked looks from Chaudry and Priorities, which in its first day at Coterie filled 400 orders for its bohemian-inspired tie-dye dress.

While the hurricanes hindered sales in Florida, one visiting boutique owner from Baton Rouge, La., said they have actually helped her business. “We’ve had record days during the hurricanes,” said Reagan Hoffman, co-owner of Nanette Kadair Ltd. “People were off from work so they went shopping and we had so many evacuees from New Orleans staying with us, it actually helped business.”

Hoffman and co-owner Sari Turner liked looks from Tibi, Kulson and Milly. “We’re looking for lots of adornment and pieces with a Moroccan edge,” said Turner.

The denim companies appeared to be dressing it up. “It’s not your basic jeans-and-sneakers anymore,” said Goldenberg. Styles from Rock & Republic mirrored Fifties looks with lots of cropped and cuffed pants. The denim line Evisu spiced things up by featuring colorful embroidered jeans.

The Train Pulls Into Town

The Train New York brought a global sensibility to the West Side.

The show drew about 60 vendors from countries such as France, South Korea, Taiwan and Colombia, which showcased their wares for approximately 2,800 retailers over a three-day period that wrapped up Wednesday.

The Train, which took place on 11th Avenue between 27th and 28th Streets, was organized by Fédération Française du Prêt à Porter Féminin and focused on innovative artists from around the world. “There are very good labels out there, but something was lacking,” said Jean Pierre Mocho, chairman of FFPAPF. “We tried to fill the void by finding innovative, creative collections, and I think we’ve fulfilled some part of the market.” The show will run twice a year.

Retailers seemed to agree with Mocho’s assessment. “These designs are cutting-edge but wearable,” said Kara Dougherty, owner of Pandora’s Box, a women’s boutique on Martha’s Vineyard. Dougherty specifically liked the Chicago-based designer Michelle Tan, whose collection featured full skirts made with multiple fabrics to create movement. “I like that they’re all handmade,” said Dougherty. “They’re sort of fantasy-like.” Tan’s collection wholesales between $100 and $400.

Fashion consultant Stacy Albert was at The Train shopping for boutique owners in New Jersey as well as clients in Malaysia and Taiwan. “This show has a European sensibility,” Albert said. She liked that trends were consistent among designers. “When trends are easily recognizable, it’s easy for the retailers,” she said. Albert noted that big trends for spring included “sparkle and shine” as well as full skirts, cropped, fitted jackets and lots of embellishment, like tanks from the Taiwanese label, Adore, that featured beaded and sequined tops that wholesale between $70 and $160.

Marsha Posner, co-owner of JP Associates, a buying office here that represents 30 specialty stores, thought the show was particularly complementary to specialty boutiques. She liked the bouclé suits from French designer Edward Achour, which wholesale for about $575, and the hand-printed tunics from Tao Freedom of the Body. Posner said she’s been surprised at how well her businesses are doing. “Business has been excellent lately. I have a lot of freedom. We’re constantly getting reorders,” she said. “Except for areas where the hurricanes have hit — like my businesses in Palm Beach,” she quickly added.