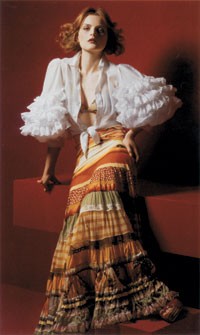 Stores from J.C. Penney to Bloomingdale’s to Neiman Marcus report the bohemian trend really took off this season, with women buying fuller skirts and embellished tunics and camisoles across different price points. Tunics; short, flippy skirts; longer, tiered skirts, and anything in white — especially denim — are all being scooped up by shoppers, according to a retail check around the country.

Even though April’s comp-store sales results were a mixed bag because of rising gas prices and economic jitters, there appear to be pockets of strength, especially among teen retailers and stores that focus on high-end merchandise. The latter are seeing sales increases this season of up to 25 percent, with consumers showing little price resistance.

“We are having a very good spring season,” said Kal Ruttenstein, senior vice president of fashion direction at Bloomingdale’s. “White is the big color, but trends also include fuller skirts and skirts that are slightly ruffled and feminine-looking and always worn with flat shoes.”

Other trends at Bloomingdale’s include the next stage of ponchos, such as shrug-like wraps or sweaters with loose sleeves, including those by Max Azria. Among Bloomingdale’s top-selling lines are Viktor & Rolf, Theory and Giorgio Armani black label. Ruttenstein added that recent window displays of Jean Paul Gaultier’s big skirts resulted in 80 of them being sold.

“Regardless of the price point, if there is a full skirt, we are selling it,” Fink said, “And it seems the more print, the more embellished, the better for spring and summer.”

Judy Collinson, executive vice president and general merchandise manager of Barneys New York, noted an increase in dress sales, from Rochas’ silk floral and lace styles to Martin Grant’s Empire-waisted ones and Lanvin dresses across the board. Other top-selling trends at Barneys include prints, from Prada’s rooster-printed cotton shirts and a fish-printed cotton skirt to printed Marni skirts and dresses. Another hot item was Balenciaga’s full silk pant, and Dries Van Noten across the board.

“Novelty tops in general have been a strong category,” Collinson said. “The sexy little bra tops from Proenza Schouler and a gold sequined top from Behnaz Sarafpour sold extremely well.

“The most special pieces from designers sold easily,” she added. “There seems to be an up mood. People are not buying basics and are not trying to fill up their wardrobe. They are still buying emotionally and choosing special merchandise.”

But this might be short-lived. For fall, Collinson anticipates a continuation of Empire-waisted pieces and a more somber turn, “so the wild colorful prints that we saw this season won’t be so prevalent,” she said.

At Bergdorf Goodman, “Skirts with a volume, metallics, particularly gold, and ornamentation have been important,” said Robert Burke, senior vice president, fashion office. “There is a strong reaction to white and cream, which is precursor to where we are going for fall with more of the deeper tones.”

At Henri Bendel, top items have been the long shimmer skirt from Alka Vora and Sage and India-inspired tunic tops from Nikka.

“The bohemian trend was enormously successful for us,” said Scott Tepper, the store’s fashion director and divisional merchandise manager for apparel, accessories and lingerie. “For our customer, the balance between a bohemian or an embellished top with denim on the bottom to complete the outfit is a very well received way of dressing.”

Overall, Tepper added, Diane von Furstenberg’s business is experiencing “huge growth,” as is Rebecca Taylor’s with patchwork brocade camisoles and dresses. Also trending are cocktail and evening clothes from Colette Dinnigan and Matthew Williamson, and “anything zigzag” from Missoni.

“The long skirt is really happening,” said Stefani Greenfield, co-owner of Scoop, who noted that her business is 15 percent ahead of last year.

Long, flowy skirts are big hits at Intermix stores, too. “We do a more modern version of the bohemian-layered look. It’s not so ethnic; it’s not straight off the streets of India,” said Khajak Keledjian, chief executive officer of Intermix. Skirts by Matthew Williamson, Catherine Malandrino and Cynthia Steffe have been consistent favorites of customers.

Keledjian said Intermix has seen double-digit growth because “the economy is so great. “I’ve seen no price resistance,” he said, “But the product has to be special and it has to have longevity.” He said consumers tend to pair $800 Chloé pants with $50 T-shirts.

“We’ve been pushing the brands these days. Now, you can find Valentino at Intermix. What are the odds?” he said. “We’re capturing the younger audiences with couture houses like Valentino and Givenchy. Younger people want to have those names.”

Stacey Pecor, owner of Olive & Bette’s, said business is already up 25.3 percent from last year. Pecor said sales at Olive & Bette’s were up 20 percent in 2004 over 2003 — an increase that has remained consistent over 10 years. For 2005, she expects sales to increase by 31 percent. Even its Web business is up — at a rate of 76 percent per month.

Long, loose slacks in linen by Theory continue to be customers’ favorites, making it her number one vendor. White denim is another trend customers can’t seem to get enough of, with denim capris by Red Engine, AG and James Cured by Seun among the season’s must-haves at the store.

At Gabby, a women’s specialty store in Greenwich, Conn., and Great Neck, N.Y., they’re selling “a lot of skirts, especially the tiered long ones,” said Yvonne Mane, co-owner. Among the best-selling long, layered skirts are those by Avenue Montaigne, Vertigo and Cool Change. “White, beige and black are what’s selling,” she said, adding that belt sales have been very strong, as well.

Boston-area retailers are having a colorful spring, too, even if the cool weather hasn’t helped. Vivid greens, coral and aqua have been strongest and shoppers are carting off all things white — in denim, chiffon and cotton gauze. At the Lacoste store in the Prudential Center downtown, the Silver Gray Collection, priced 30 percent above mainline Lacoste, is exceeding expectations.A red-and-white candy-striped dress at $140 is among the most sought-after styles.

For her part, Kate Betts, co-partner of Beacon Hill boutique Holiday, has requested another shipment of a $396 Development tunic that doubles as a dress. She sold six of the pricey tunics in as many weeks.

Trends from preppy to bohemian also are doing well at Relish in Washington, D.C., Owner Nancy Pearlstein pointed to Junya Watanabe’s full skirts that recall the Fifties as an example of a look that blends different trends.

In Bethesda, Md., Daisy Too is finding plenty of interest in free-flowing styles. “You can wear three necklaces and it’s totally fine. We have learned to layer our jewelry,” said co-owner Fabiana Zelaya. The store also has been doing well with such jeans lines as AG, Citizens of Humanity and Antik.

In the Southeast, “Bohemian gypsy looks are absolutely the mainstay of our business,” said Freda Greenbaum, co-owner of A Nose for Clothes based in Miami. Anything exotic or embellished with beading or paillettes has been popular for all ages, especially on skirts, she said.

Tunics have also been popular for spring, as well as denim and T-shirts embroidered with what she called “folkloric designs.” Moving toward late summer and fall, she said that animal prints, crocheted items and wooden bangles are finding interest.

As of the end of April, comp sales are up an average of 10 percent over the same time last year for six of her nine locations in Florida and Georgia; the remaining three stores show no increase. Greenbaum said that rather than being resistant to luxury pricing, her customers are responsive. An embellished Indian-motif skirt that retails for $285 to $375 has sold over 300 pieces in the past three months, and “nobody flinches” at the price, she said.

Jim Morton, vice president and director of stores for Mark, Fore & Strike, based in Boynton Beach, Fla., reported similar sales increases, citing a 10 to 15 percent increase in comp sales over this time last year. “Our high end has been driving our business,” he said. “We’re increasing revenue by increasing average unit price. There still seems to be a fairly good market for luxury goods.”

In the Southwest, retailers also reported healthy increases this spring as shoppers go for embellished bohemian styles, particularly flowing tunic tops and full skirts, belts and handbags. “Our increase as a company was the mid-20 percent, which is very, very good,” said Penne Weidig, buyer for Tootsies in Houston, which operates four contemporary to designer stores in Texas and Atlanta.

Embellished styles did consistently well throughout all departments, from designer collections to shoes. “The biggest surprise was that the first things to sell out were the most outrageous, most opulent and most expensive pieces across the board,” Weidig said.

In the past six weeks, Tootsies sold more than 40 Valentino handbags decorated with coral and crystals, each retailing for over $1,000. The Lanvin collection also has done exceptionally well, particularly the gold brocade pieces and a teal silk shantung dress with a black lace back.

At the opposite end of the price spectrum, bohemian styles led the contemporary and junior businesses at J.C. Penney, while career customers went for such dressy casual looks as a lightweight trench or cropped jacket over a camisole and floral print skirt, a spokesman said.

Bold, bright colors have done well, and bestsellers have included a ruffled camisole by Bisou Bisou, a Nicole by Nicole Miller sweater jacket and sequined handbags. Camisoles have beaten plan, but sales of shorts have been slower than expected, possibly due to cool spring weather.

On the West Coast, if it’s worn, torn, beaten, mangled, looks used and costs a pretty penny, then shoppers can’t get enough of it, said Joanna Cataldo, women’s buyer for Sharon Segal at Fred Segal Santa Monica, who has been seeing the trend in everything from denim to knitwear. Lines that have been doing particularly well include Grail, Rebel Yell and Butterfly Dropout.

While Cataldo said there has been no price resistance at the store, she noted that one of its best-selling lines has been Chick by Nikki Hilton, which offers tank tops for $28 to $32 and denim pieces, such as skirts, jeans and jackets for $78 to $98.

At Mario’s in Seattle, a high-end women’s and men’s boutique, sales have been up in the high double digits over last year. But that doesn’t mean customers don’t want value.

“I think that sometimes people might be buying fewer pieces and buy what they love,” said Lynwood Holmberg, Mario’s women’s fashion director. “But there’s no resistance on the things they love.”