Bollywood on the Seine – Armani Prive 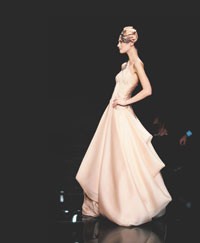 It’s only fitting that this season of glorious haute revival should have ended with an extravaganza, a glitzed-out, star-studded, champagne-swilling affair complete with mega after party as in the good old days of couture’s last comeback — a decade or so ago. And leave it Giorgio Armani to oblige.

Armani rented — and transformed — two floors of the Musée d’Art Moderne for his fete after the show for a party for 600 of his closest admirers. But then, Armani had lots to celebrate. He just opened his imposing new boutique on Avenue Montaigne; he has two beauty launches on the docket, Crema Nera and Skin Minerals for Men, and celebrities of the red-hot career and sunny starlet varieties can’t seem to gush over him enough these days. To wit, Cate Blanchett, Katie Holmes and Rachel McAdams all turned out for the show, Blanchett giving instant, advance credibility to the major tailoring soon to hit the runway when she strutted to her seat looking spectacular in a tight black suit. She had flown in earlier in the day, stopped by the new boutique with Armani and picked up an argyle-pattern sweater and some Privé jewelry.

She and everyone else settled in for a lavish Italo-Indian hybrid that stretched the Armani bravado to its max. Colorwise, it was more Milan than Mumbai. Aside from a few dark suits at the opening and a touch of gentle color at night, the designer trod only pale neutral turf. But neutrality stopped with the palette. In every other way Armani’s pronouncements were powerful and extreme: the tailoring, the embellishment, the glamour, the confidence. By day, that meant a combination of high structure and subtle draping, those dress- or suit-over-churidars a runway-only affect in support of the cross-cultural motif. By evening — which, let’s face it, isn’t Feb. 25 right around the corner? — a glamourama supreme. There were festoons of fringe, floating silks and sexy columns, each with a dose of glitz, from a subtle twist of crystals to thick, seemingly random encrustations of major jewels. It made for an event that dazzled — on many levels.

Later, at the party, Blanchett was asked her opinion. “The Ganges parted,” she said.