There's more than one way to create an appealing collection. Karl Lagerfeld did it for Chanel with stylish real clothes in cutaway linear shapes, while Alexander McQueen offered a fairytale narrative replete with witty versions of Victorian and Indian... 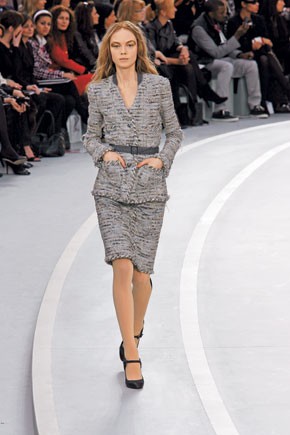 There’s more than one way to create an appealing collection. Karl Lagerfeld did it for Chanel with stylish real clothes in cutaway linear shapes, while Alexander McQueen offered a fairytale narrative replete with witty versions of Victorian and Indian looks.

Chanel: Forget the Carrousel du Louvre. On Friday morning, Karl Lagerfeld unveiled a brand-new set he commissioned just for this season: the Carrousel du Chanel. His pale gold-and-white merry-go-luxe had not a gaudy painted animal in sight; rather, his girls perched on giant 3-D renderings of the house iconography — jacket, camellia, ballet flat, pearl bracelet, Chanel No.5. It was actually the house’s collaboration with Zaha Hadid opening later this month in Hong Kong that put the bee in Karl’s boater: “They do Mobile Art,” he said before the show. “We do mobile, but it’s not art.”

Rather, it’s fashion of the commercial sort, for which Lagerfeld has never been an apologist. And in keeping with the mood of the season it was, if not exactly austere, then at least pared-down. For starters, but for a few charming berets, Lagerfeld banned all accessories from the runway. “We needed a break,” he declared, but then promised, “We put them in again in Miami,” referring to Chanel’s cruise show in May.

Here he offered an appealing pastiche of favorites new for the season. His primary motif was to work a curve, which resulted in linear cutaway shapes such as jackets and coats that opened to show the pieces beneath, or dresses with a subtle capelike effect in back. Long, lean suits came in tweeds that were shredded, not in the delicate manner of his spectacular couture a few years back, but with a gusto that approached kitsch, elbows slashed as obviously as the knees of preworn denim. But then Karl showed some of that, too, in frothed-up miniskirts. His knits were of the cozy variety, whether a ribbed gray dress edged with pink crystals or a big belted coat. In the spirit of less, evening was also a low-key affair — that is, unless a girl takes some serious harness action literally. Otherwise, a lovely blouse-with-skirt combo and a gray ruffled shift looked pretty and demure. Perhaps too demure for some. But no need to worry. Miami’s up next.

Alexander McQueen: “The Girl Who Lived in the Tree.” It’s a fairy tale of Alexander McQueen’s creation, one he told visually on Friday evening in a breathtaking collection.

The story was inspired by the giant 600-year-old elm tree in McQueen’s garden and by his own recent experiences during which he spent what he called a life-changing month in India. McQueen, whose work reflects his passions and mood swings in a very personal way, said the trip brought him out of a dark year reflected in shows honoring his ancestor, Salem witch-trial victim Elizabeth Howe, and his friend Isabella Blow, one rooted in anger, the other, sadness. Here, he expressed in fashion a newfound sense of joy, his heroine emerging from the oppressive shade of the tree into the light where she meets and falls for an Indian prince, while rubbing elbows with British royalty, too.

The first half of the show, inside the tree, featured gloriously Victorian Goth ballerinas in black dresses blown up over petticoats. One was crafted from mirror-image lace peacocks; another came in black wool inset with lace godets; still another, a sweater-knit wonder decorated with crystal snowflakes. These were interspersed with reed-thin, moody black jacket-with-pants looks and muted punk plaids.

By the second half, the girl had shed her demons but not their penchant for looking amazing. Her royal fascination switched from Victoria in perpetual mourning to the young Elizabeth II bedecked in Fifties British couture and to the Indian maharajas, from whom she pinched her newfound love of color and ornamentation, including lavishly adorned flat slippers inspired by early Roger Vivier and jewelry in mind-boggling amounts, zillions worth of real Raj stuff lent from Munuu of India’s famed Gem Palace. (The security backstage must have been something.) The stunning dresses came richly encrusted with jewels or delicately embroidered under cutaway frock coats. Amid all of the frou, a red sari and white Josephine gown, neither a plain Jane, somehow offered interludes of exquisite calm.

Next up for McQueen: the opening of his Los Angeles store, where he promises that all of this runway splendor will be available. “If you’re going to have a shop in L.A.,” he said, “you’ve got to show the real McCoy.”