The name might sound like paradise but Edun, a new socially conscious clothing line cofounded by Bono, is much more complicated than that.

The thought-provoking musician and his wife, Ali Hewson, set up the company with Rogan Gregory, whose... 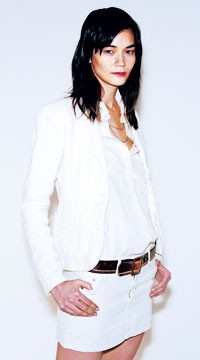 The name might sound like paradise but Edun, a new socially conscious clothing line cofounded by Bono, is much more complicated than that.

The thought-provoking musician and his wife, Ali Hewson, set up the company with Rogan Gregory, whose Rogan clothing brand has its own cult-like following. Aside from designing sportswear with a definitive point of view, the trio’s aim is to foster sustainable employment and generate commerce in developing nations such as Peru and Tunisia. Simply put, they want to offer trade, not aid. Now they’re readying for next month’s spring launch in 46 Saks Fifth Avenue stores.

“With the Edun brand we hope to make the story of our clothes as great as the design,” Hewson said in a statement.

To some degree, the story began when U2’s stylist, Sharon Blankson, became familiar with Rogan’s environmentally friendly ways. The tale continued when Gregory visited Lugala, the ethereal estate in the Irish countryside owned by Bono and his wife — a retreat “they call a hunting lodge but it’s more like a castle,” Gregory said. He arrived interested in the idea but left inspired by the glinting lake, mossy green landscape and “the way they go about things — they really have amazing instincts.”

Interestingly, Edun is the inversion of Nude, Hewson and Bono’s popular organic fast-food chain in Ireland. In that vein, the clothing line is a parallel to their food business, sharing an aesthetic and a hometown of Dublin.

More than half the cotton is sourced from nonsubsidized organic growers in West Africa and South America. For fall, production will be extended to Lesotho, in southern Africa, and Tanzania, in east Africa.

“I want to be able to buy clothes for me and for my family knowing that no one was exploited en route from initial concept to the finished product,” Hewson said in a statement.

Chiffon dresses, knit jersey tops, sexy trousers and jeans are some of the 49 styles in the women’s collection. Wholesale prices range from $22 to $125. Each garment carries the brand’s motto, “We carry the story of the people who make our clothes around with us.”

In Saks Fifth Avenue, Edun will be housed with contemporary sportswear. It will also be available at select specialty stores like Atrium here and Fred Segal in Los Angeles.

Despite the reminder on the label, Gregory said he doesn’t really care if people know the whole story behind the brand. “I’d rather they buy it because they like the design and the way it makes them look,” he said. “If they’d like to learn more, that’s great.

“In the end, you have a lot of options with clothing and the choices you can make with your money,” he said. “But we are confident that this is being done in a humane manner.”

Most of that confidence stems from having Edun executives work in or frequently visit its far-flung factories. Scott Hahn, chief executive officer of Rogan and its sister company Loom State, an organic denim line, and Richard Cervera, ceo of Edun, routinely travel to see what’s going on with production. As part of their collaboration and to avoid the expense of launching a business, Edun relies on Rogan’s resources and its 40 employees.

Saks Fifth Avenue will launch Edun at a bash with Bono and the gang on March 11 in its New York flagship. Ronald Frasch, the retailer’s vice chairman and chief merchant, said, “Bono is so all over this project. It’s pretty impressive, especially for a guy who is going on a major tour soon. He is a man with incredible vision. He is a man who has enormous political power but is as humble a guy as anyone would meet.

While guerrilla marketing events have not been inked, Frasch noted how last year Bono surprised New Yorkers by having U2 perform on the back of a flatbed trailer while rolling through the streets and capping that off with an impromptu concert in Brooklyn.

Beyond his celebrity status, Bono has a one-for-all-and-all-for-one mentality that is contagious. “He has a singular social mission of helping the world and he communicates this with such passion that’s it’s difficult not to get on his bus, so to speak,” Frasch said.

To spread the word about its mission through in-the-know friends, Edun is hosting a hush-hush party Friday night near Gramercy Park. The guest list of artists, photographers, writers and filmmakers includes Yoko Ono, Norman Mailer and Francesco Clemente. Attendees are meant to leave inspired, which might explain why a notable Columbia Presbyterian physician who moonlights as the president of the Yeats Society will recite his favorite poet’s works.

“This will be a call to arms for a small group of our close friends who are very influential around the world,” Hahn said. “In a way, it allows people to understand our supply chain and the whole point of what we’re doing.”

Bono is committed to creating decent jobs, especially in Africa, where manufacturing jobs are in jeopardy due to the lack of trade barriers there and the double threat of China lifting its quotas, Frasch said. Six apparel factories in Lesotho closed last month, and their employees had no notice but padlocks on the factory doors, Hahn said. To try to avoid such scenarios, Edun is going to places in the developing world and “staying there,” whether that involves helping towns to get a water well or building infrastructure, Hahn said.

“This is not a fair trade line or a charity. It’s a true profit-driven company,” he said. “People [abroad] love to hear that because they know we are there to do business and we’re staying.”

There’s no telling whether Edun will prompt other companies to reconsider how and where they do business. But Frasch praised Bono for his tenacity.

“He’s a pretty brave guy for taking the first step out there,” Frasch said. “But he’s not doing this for the sake of doing it. This is a brand we want to build a business with.”