Book Excerpt — Gaetano Savini: The Man Who Was Brioni

Read an excerpt from the book. 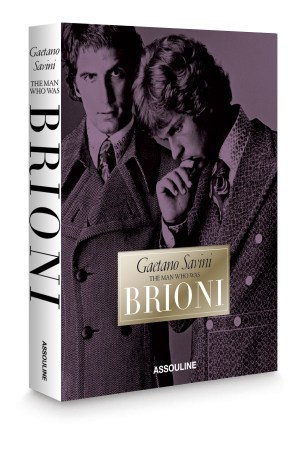 “Gaetano Savini, the Man Who Was Brioni” by Fernando Morelli, Lea Della Cagna and Michelle Finamore explores the origin of the historic company. Read an excerpt from the book.

Gaetano Savini Brioni was not born a Brioni. He chose the name of his tailoring atelier in 1947, and he so closely identified with his brand that in 1952 he officially added “Brioni” to his birth name. The absorption of the business into every aspect of his life was natural for Gaetano, as he readily described his work as “love, not business.” The biography that follows is, by necessity, a story intermingling the personal and the professional, the familial and the entrepreneurial, and the national and the international. Gaetano’s design ethos reflects the cultural and aesthetic landscape of Italy, yet his impact was felt far beyond the boundaries of his native country. Brioni—both the man and the company—profoundly challenged ingrained ideas about menswear in the latter half of the twentieth century.

Today there is nothing unusual about male models on the runway, brightly colored menswear, or suits that follow the natural contours of a man’s body. Men can readily purchase a total look, complete from head to toe, that communicates a designer’s vision. Designers have recently heralded the advent of the older fashion model, with advertising campaigns notably featuring models over eighty years of age. The knit “polo” shirt and the nicely styled man’s carryall are ubiquitous. We have also grown accustomed to the idea of menswear designers as designers, rather than tailors, who present new collections at the fashion weeks in Paris, Milan, and London. All of these developments, however, are not traditional. As Esquire and GQ fashion editor G. Bruce Boyer wrote, “all the defining innovations in menswear in the past half century go back, in one way or another—and usually the route is direct—to Brioni.”

Brioni suits are the sartorial expression of Italy itself. The Brioni line, later known as the “Continental cut,” took inspiration from ideals of classical beauty as they relate to the human body. The varied, rich patterns and vibrant hues of Brioni textiles referenced the lush patchwork of the Italian landscape and sumptuous Renaissance velvets. Like the city-states that constituted Italy for much of the country’s history, Brioni’s tailoring firm came of age when the independently operated tailor shops and family-owned textile firms were finally coming together as a cohesive industry. Brioni was an instrumental player in a unification that eventually resulted in Milan as a “must” stop on the whirlwind fashion calendar.

The first alta moda shows at the Palazzo Pitti in the early 1950s proved to be a pivotal moment in the history of Italian fashion, bringing the country’s distinctive style and impeccable craftsmanship to the rest of the world. The 1952 runway show featured womenswear by the most accomplished couture designers in the country: the richly encrusted, lavish creations of Simonetta, the dramatic silhouettes of Roberto Capucci, and the highly ornamented ball gowns of Sorelle Fontana. This particular show, however, was different from those that preceded it because male models strutted down the runway alongside the women. These models wearing Brioni suits were not mere escorts—their ensembles had verve, style, and a new line that was markedly fresh and different. Just as the Italian women’s fashion designers offered up their challenge to the hegemony of the Paris couture, Brioni threw down the gauntlet to its male corollary—that of Savile Row.

Excerpted from “Gaetano Savini: The Man who was Brioni,” published by Assouline Books, copyright 2015.