The project enlisted 23 designers to contribute to a special collection, which will launch on Shopbop.com this spring. 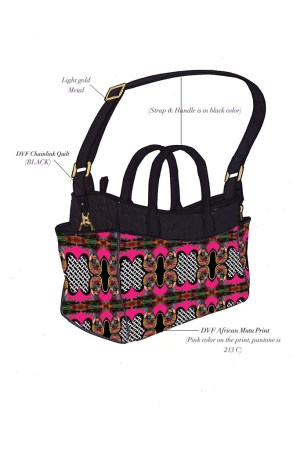 The initiative was unveiled at a press event at the DVF studio in the Meatpacking District Wednesday afternoon.

This story first appeared in the November 21, 2013 issue of WWD. Subscribe Today.

Each participating designer incorporated two custom prints by Kenyan-born artist Wangechi Mutu for clothes and accessories with both mother and child in mind — von Furstenberg, for example, designed a special baby bag and scarf for the initiative.

Megrue lauded the fashion industry for having “so generously added their time, talent and voice to our collective efforts to meet the serious, but achievable, challenge of eliminating mother-to-child transmission of HIV by Dec. 31, 2015. The private sector is committed to working in partnership with the global health community to meet this goal.”

More than 90 percent of HIV infections in children are the result of mother-to-child-transmission, which can happen during pregnancy, childbirth or breast-feeding. While the danger of such transmission has largely been eliminated in Europe, the U.S. and other parts of the West, it’s still a major issue in sub-Saharan countries. In 2012, 260,000 children were still newly infected with HIV. One pill a day can prevent 98 percent of mother-to-child HIV transmission.

Cathy Beaudoin, president of Amazon Fashion (Amazon owns Shopbop), noted, “It’s exciting to offer our customers products created by such an amazing group of designers and, most importantly, inspired by such a worthy cause.” Samantha Power, U.S. permanent representative to the United Nations, was on hand at the launch. “The Bornfree campaign humanizes one of the most vital causes of our time — ensuring that the baton passed from one generation to the next is not tainted by the poison of HIV/AIDS, so that a baby begins his or her life with a fair chance of living it,” she said.