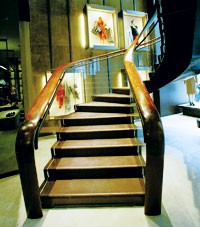 NEW YORK — Bottega Veneta prides itself on luxury craftsmanship and discretion, but it’s dropped the latter when it comes to the size of its new Fifth Avenue flagship.

The company opens its largest store in the world today at 699 Fifth Avenue in a Twenties town house that boasts 9,000 square feet, 5,500 of which is selling space. Located in a former Club Monaco store, the new shop is a reflection of Bottega Veneta creative director Tomas Maier’s refined aesthetic and his penchant for playing on industrial versus natural elements.

Designed by Maier in collaboration with architect Bill Sofield, the two-story space is a study in muted tones with variations on taupe, which pervades the entire store from its Wisconsin limestone floors to its suede covered walls.

Maier carefully chose luxe materials with which to adorn the store. To that end, 18-foot louvres made of palm wood sit in the windows (and are movable to calibrate the amount of light that enters the store), walnut tables house the brand’s extensive small leather goods collection, benches covered in shorn mohair dot the space and a collection of its signature handbags lines an entire icon wall near the entrance.

The pièce de résistance is a massive freestanding staircase, which Maier refers to as “an architectural masterpiece.” It spans two floors and is constructed out of steel and glass with a handrail made of strips of walnut wood.

But the real appeal of the space for Maier was its unconventional shape. “I don’t particularly like working with characteristic spaces, like a mall space, which is a deep cube,” he explained. “I love spaces with an odd [layout] because you have to start to rack your brain and find a solution. In the end it makes a store that has personality.”

The store provided him with that challenge in spades since, not only is it an old town house, part of its space is carved out of the St. Regis Hotel building.

Its many niches serve to create intimate salons for the entire breadth of Bottega’s product categories — handbags, accessories in exotic skins, eyewear, jewelry, shoes, luggage, ready-to-wear, custom and home. “I hate it when you have a dead end,” continued Maier. “You walk to the back and then you walk back out the same way. I think it’s very unpleasant for a shopper. I like the idea that you can wander and discover and go from room to room in a continuous way.”

To mark the flagship’s opening, Maier designed five limited-edition handbags each inspired on some level by New York City, ranging from the neon lights of Times Square to the Empire State Building. The bags range in price from $720 to $4,900. Additionally, the company’s U.S. offices and showroom will be located above the store.

The New York flagship showcases Bottega’s new store concept, which debuted in the Paris store two years ago. Since then the company has opened stores with the new concept in London, Milan, Munich, Hamburg, Berlin, Capri, Portofino, Coral Gables and Manhasset.

But this isn’t the first round of renovations at Bottega. Soon after being purchased by the Gucci Group in 2001, the firm did a quick renovation of the Bottega store on Madison Avenue and others throughout the U.S., which reflected the company’s interim design concept. The Madison Avenue store closed last week.

“Now we’re proceeding with our presence in New York,” said Patrizio Di Marco, chief executive officer and president of Bottega Veneta, in a telephone interview. “We’re opening here because there was a major opportunity when Gucci Group decided not to open Boucheron in that space and it became available to us. It’s a prime retail spot on Fifth Avenue, in a great neighborhood and it was important to us to show all of our products and also the new [store] concept.

“In terms of expectation, we’re pretty confident that we are going to do much better than before simply because Fifth Avenue is getting back to what it used to be — a major, major shopping avenue,” said Di Marco. “It went through a few years with entertainment stores here and there and now the street looks fabulous. So it’s a great time for us to be here. Secondly, you have tourist flow that you don’t have on Madison.”

Additionally, Bottega Veneta is the darling of Serge Weinberg, ceo of Gucci Group’s parent Pinault-Printemps-Redoute. During a WWD interview last month, Weinberg repeatedly expressed a fondness for Bottega, which is currently logging sales growth in excess of 50 percent. The company’s volume is estimated at 95 million euros, or $117.6 million at current exchange rates. Approximately 85 percent of the business is retail and 15 percent is wholesale.