By Luisa Zargani and Alessandra Ilari on June 23, 2006
View Slideshow 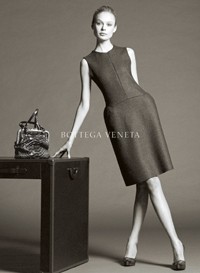 In the first place, legendary British photographer Tony Armstrong-Jones, better known as Lord Snowdon, who wed Princess Margaret in 1960, shot it. Famous for his portraits of artists, celebrities, politicians and, above all, the British royal family, the 76-year-old photographer zoomed in on model Inguna in a portrait style, a new approach for Bottega Veneta.

To enhance the luxury collection’s shades of gray, black and brown, the images were shot in black and white in a Milan studio. The campaign also includes Bottega Veneta’s new fine jewelry and furniture lines.

“Lord Snowdon is someone whose work I’ve long admired,” said Tomas Maier, Bottega Veneta’s creative director. “His sense of composition is remarkable, yet the emotional focus of the photograph is always on the individual. This is the same philosophy that Bottega Veneta brings to everything we design.”

The campaign breaks in the August issues of select magazines globally. The company declined to disclose its ad budget for the season.

Zhou Xun will be in movie theaters opposite Ziyi Zhang in “The Banquet,” an adaptation of “Hamlet,” later this year. Dong Jie starred in Zhang Yimou’s “Happy Times,” “Sound of Colors” with Gong Li and Zhang Ziyi, among others, and “Dragon Tiger Gate.”