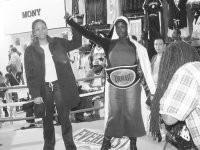 NEW YORK — A growing number of active labels are staging contests not just to give away prizes and endear themselves to consumers, but to connect with shoppers and glean information from them as well.

Instead of having the run-of-the-mill sweepstakes where one lucky winner takes home a grand prize, brands are using more thought-provoking contests to get feedback from shoppers and give them a more personalized look at their brands.

“People might have our product, wear our shoes and understand where it comes from, but contests give them direct access into the company,” said Sally Murdoch, public relations manager at DC Shoes, a California label popular with skateboarders. “Contests help give younger consumers a voice to be heard. They can add a comment and that definitely gets into the hands of someone who can make a difference.”

To win tickets to the Los Angeles and New York premieres of “The DC Video,” a new flick about skateboarding three years in the making, shoppers entered a contest at skateboard shops that carry DC Shoes, which also makes skateboarding apparel. The company invited 200 guests to the June 19 premiere at Grauman’s Chinese Theater in Hollywood and to Friday’s New York premier at Roseland.

The aim is to give customers a memorable experience that makes more of a lasting impression than any print ad. “They could win the chance to be on the red carpet with pro skateboarders and celebrities, and to watch them jump out of their limos,” said Murdoch.

For a few weeks leading up to the premieres, DC fans could try to win tickets to the events by answering questions about skateboarding on the company’s Web site. For some, that meant taking a pass through the site, since all the answers could be found there. Several participants sent suggestions along with their contest entries, Murdoch said. DC Shoes might use an entrant’s e-mail address at a later date, but it already has a consumer base with 120,000 people who receive its weekly “news clip,” she said.

This spring, Sunset Beach, a junior swimwear label owned by Authentic Fitness, launched its annual “Design Your Own Bikini Contest” with Gadzooks. Earlier this month, five finalists, who were chosen from 1,000 nationwide entrants, were flown to Sunset Beach’s headquarters in Los Angeles to present their winning sketches.

Kathy Van Ness, designer division president at Authentic Fitness, said, “I was surprised that so many of the girls, including our winner, don’t even live near a beach. It’s a great way to get a new perspective on design.”

Stearman took home a $1,000 check and her hot pink charm suit will be added to the 2004 Sunset Beach line. The collection retails between $60 and $88 and is sold at 400-plus Gadzooks stores in 41 states. Gadzooks’ swimwear buyers were so impressed with all the finalists’ suits that they plan to test them in stores.

This Tuesday, Reebok launches “Take Terry Tate to Work Sweepstakes,” an opportunity to have Tate visit your office. Tate, the fictional linebacker who storms through offices in Reebok commercials, has become a bit of a cult figure with Reebok shoppers. The company plans to e-mail 700,000 consumers to alert them to the contest, which can be entered through reebok.com. Next month, 60-second radio spots will air in 12 markets.

Consumers must provide some information about themselves and have 10 seconds to complete a test that plugs Tate’s new Scrimmage crosstraining footwear. Considering 14 million Terry Tate commercials have been downloaded from reebok.com since January, the contest is expected to be a hit, a Reebok spokeswoman said.

Last month, following Everlast’s debut fashion show of its urban sportswear at the Mony store on 125th Street in Manhattan, the brand hosted “The Holla in Harlem,” a rap contest before a crowd of 150. Two winners took home $2,000 worth of Everlast apparel and boxing equipment.

George Horowitz, president and chief executive officer of Everlast, said, “While Everlast has a tradition in boxing, the brand has appeal to a broad audience. Our brand has a considerable inner-city cachet and one of the most efficient ways of reaching audiences is through music and events like ‘The Holla in Harlem.’”

Salomon is stepping up its contests to get a better sense for what consumers want. Contests and raffles are part of Salomon Oasis, a wear-testing event held at 10 resorts from January through March. Next year, Salomon plans to add a few more stops because of consumer demand, said Kim Speed, apparel category manager.

“We challenged ourselves to become super consumer-focused three seasons ago and have been aggressively building on our interactive consumer events, contests and test centers ever since,” she said.

The company also directs traffic from salomon-sports.com to salomonoasis.com through its “enter to win” contests, which are geared “to get consumers psyched about Salomon products, Oasis events, resort and corporate partners, as well as gives us a direct link to our consumers,” Speed said.

To be eligible for prizes, consumers have to give brief profiles describing, among other things, their athletic preferences, she added.