Nicole Miller has gone beyond clothes, and is launching products in a wide range of categories. 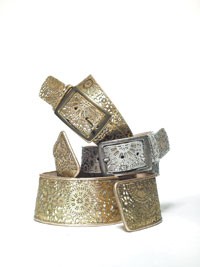 The Nicole Miller company may be 25 years old, but its loyal consumers are just getting a taste of what it has to offer as a lifestyle brand.

In late 2005, chief executive officer Bud Konheim announced the firm’s all-out accessories initiative, signing licenses for handbags, footwear, belts and jewelry, as well as other related categories in a bid to boost the brand’s revenue by 25 percent.

The firm has had accessories in the past, but Konheim’s plan was to become more involved in the design and execution of the extended categories, allowing for a more unified look in tandem with Miller’s modern, feminine aesthetic.

In the past year, the firm has been ironing out the kinks, such as changing its fashion jewelry licensee from Maurice Max to Gigi Accessories, and the accessories seeds sown by Konheim and the Miller team are set to bloom this fall on shelves at Bloomingdale’s, Nordstrom, Neiman Marcus and other retailers.

Categories now include women’s shoes produced by Camuto Group, eyewear by Signature, belts with Roma Industries and handbags by NM Designs. Miller also licenses men’s shirting and ties with A.W. Chang Corp.; umbrellas, pet products, baby and cosmetic bags with Essex; women’s golf accessories with Glove It, and several others for a total of 34 licenses. Included in that queue are 10 licensing agreements to produce home goods for Bed Bath & Beyond, which Liza Saunders, licensing manager at Nicole Miller, said had been a very lucrative niche for the fashion firm.

“Everybody’s in the start-up phases” commented Sanders about the fashion accessories, who added that there has been a soft launch of handbags, belts and shoes for spring in the firm’s SoHo store in Manhattan.

And even at this early stage of the spring shopping season, the accessories are already a hit,

according to Rogers Pimenta, general manager of the Nicole Miller SoHo boutique. “The bags are doing awesome,” he said. “Just earlier, one of my good customers came in and bought a dress. We added the necklace and shoes, and the first thing she said was, ‘Wow, the necklace really made the look.’ That’s the thing. It’s all complementary to the clothes.”

Styles for spring include large leather satchels in cutout metallic leather, clutches in Miller’s crinkled metallic taffeta to pair with her evening dresses in the signature fabric, oversize leather belts with an ethnic feel to layer over tunics and dresses and skinny stiletto heels that wrap around the ankle several times.

This year also marks the introduction of Nicole Miller fine jewelry. Produced by World Trade Jewelers, based in New York, the line includes gold pendants in Celtic motifs and elaborate crosses encrusted with pavé diamonds. As with all the accessories categories, Miller herself had a huge amount of input in the designs.

For fall, Miller sent all of her licensees in the direction of South America, a major influence on the fall ready-to-wear collection.

“The jewelry represents who she is,” said World Trade Jewelry designer Maria Fryda Velarde. “I talk to [Nicole] about what her style is. She likes to approve everything and details are very important to her.”

“Nicole is who she is because she’s so involved,” said David Yallouz, ceo of Gigi Accessories. “My designers do the final touches, but it’s her vision. When you talk to her, you realize she’s a genius. She knows what she’s doing.”

Kate Nienen, designer for NM Designs, which produces Nicole Miller handbags, had a similar experience working closely with Miller and her team. Based on Miller’s South American inspiration, Nienen sourced some vintage-looking, intricate hardware, which Miller just loved, according to Nienen.

The fine jewelry will be launched in May on Shop NBC. All the accessories will be shown at the Nicole Miller runway show on Feb. 2 at the tents at Bryant Park during New York Fashion Week.