Swerving the Runway: Not Every Brand Needs a Splashy Show to Succeed

London brands are building businesses on the back of direct-to-consumer strategies, showrooms, private appointments, look books — and charm.

LONDON — Who needs the runway when there’s the digital screen, the salon, showroom, shop floor — or a cup of tea and a chat?

Brands such as Duro Olowu, Markus Lupfer, Goat, Needle & Thread, Bella Freud, Rixo and Giuliva Heritage Collection certainly don’t need to walk the catwalk, and neither do scores of others, in London — and other fashion cities worldwide.

In an industry where the noise has become deafening, where sustainability is top-of-mind, and communing with the end-consumer has become second nature for so many designers, the runway — with a few exceptions — can look out of date, expensive, bad for the environment – and just wrong.

During London Fashion Week, which wrapped on Tuesday, protesters from Extinction Rebellion turned up the heat outside Victoria Beckham’s show and outside the official British Fashion Council venue.

The protesters, who want to put an end to fashion production and consumption, chanted their slogans — and pleaded peacefully with showgoers to quit shopping. They held up placards that said: “Repair, re-wear, rebel,” and “Enough is enough. Fashion = Ecocide.”

Early Tuesday, during a lively debate on the sustainability of fast fashion at the Royal Danish Embassy here, Judith Watt, the fashion historian and journalism professor, said her response to fashion’s environmental problems is: “Recycle, recycle, recycle. Make do and mend. All it takes is a needle, a thread and a pair of scissors.” 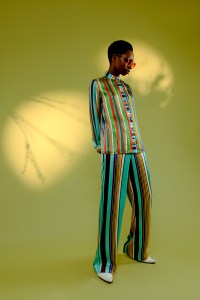 While a traditional runway strategy may work for some, others have chosen to eschew the spotlight altogether, or choose a low-budget, low-key, low-waste way of marketing their wares — and they are not looking back.

“A show is the cherry on fashion’s cake, it’s about drama and fantasy and a special moment in time,” said Maria Lemos, the founder and director of the London sales and p.r. showroom Rainbowwave. “But now shows are under scrutiny for reasons of sustainability, and some brands are drowning in them, spending money that they don’t have. It can kill a designer.”

Lemos, who before starting Rainbowwave worked for Sonia Rykiel and John Galliano, added that runway shows used to feel special, but not anymore.

“They were only for fashion insiders, and the people who attended them lived in those moments, but today shows are open to the world. It’s couture that still feels exclusive,” she said.

Lemos said for most brands and designers there’s a golden opportunity to renounce the runway show and create a digital or physical world, a tribe or a club, or a special “moment” that can raise brand awareness and drive sales.

Scores of designers would agree with Lemos, and cite myriad reasons for giving up the traditional show format, from sustainability to cost to convenience to putting the focus back on what they actually want.

“I think there is a shifting mood generally in how we use our resources, and how we look at our carbon footprint, in all of what we do,” said Lupfer, who stepped off the London Fashion Week catwalk nearly 15 years ago to put a greater emphasis on his wholesale clients.

For spring 2020, he stopped doing static presentations, and opted for private appointments and a look book instead. Lupfer sells from his web site, and his contemporary brand is also stocked at Selfridges, Harvey Nichols, Tom Greyhound in Korea and Tsum in Russia. 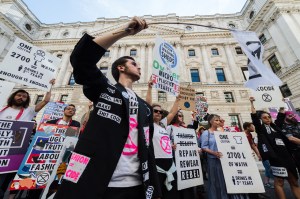 “Originally, I wanted to refocus and refine the collection in terms of merchandising, price points, shapes, commerciality, and to make it work for the retailer rather than the catwalk. You know how it is when you do a catwalk: You have to be louder, better, bigger. The shift from the front end to the back end changed the business. That’s when we really started to grow and flourish,” he said.

Duro Olowu is another designer who used to stage runway shows. Now he prefers a more intimate salon setup: During London Fashion Week, he had a clutch of models show off his spring 2020 designs in the living room of a spectacular Mayfair home across from Claridge’s. It was by-appointment and the designer spent the afternoon chatting with guests and friends, buyers and press, through the collection.

“I Ioved the creative aspect of staging a runway show, but I was always startled by how quickly it was over. And still the editors would say to me: ‘Can we come to your atelier and do a separate appointment to see the clothes?’ In the end, I just wanted to spend the effort and the creativity on making clothes,” said Olowu, who’s known for his bright, lavish patterns and color-clashing patchwork designs.

He said he relishes the time spent talking to editors, and seeing the collection through their eyes, but added it’s important that labels like his still get their message out and get their collections reviewed.

“Word of mouth is always the best p.r., even for young designers, and that word of mouth usually comes from great work that somebody has seen and mentioned and is talking about. It’s also a lot less expensive for these young designers who can end up spending a fortune. You can spend a million dollars and you can have 200 people at your show and you still might not get a review. Or you might even get a bad review,” he said.

Olowu, who launched his label in 2004, is also a big believer in a direct-to-consumer approach — and in brick-and-mortar retail.

“I think the aim should always be to have your own space, eventually, no matter how small, because you are not only creating an environment for shoppers, you are creating your CV. Every day you know that people are looking at your work. It is tough, but it doesn’t cost more than putting on a show. I think the new retail is small and chic with integrity and quality,” the designer said.

Olowu has had a stand-alone shop in Mason’s Yard near St. James’s Palace in London for seven years. Next year he plans to plant his retail banner in Manhattan, on the Upper East Side, not far from the Guggenheim.

While he declined to offer up many details, he described the New York site as a “little space in a very beautiful building. Of course people think it costs so much, but there are ways of doing it. If you look, it will find you.”

The designer also sells at retailers including Matchesfashion.com, Biffi and Banner in Milan, and Ikram in Chicago. He has recently wrapped up a collaboration with Estée Lauder, a limited-edition line of makeup cases and palettes.

While Lupfer and Olowu chose to step off the traditional catwalk, Hannah Coffin, the founder and designer of the contemporary dress label Needle & Thread, never even chose to walk it.

Needle & Thread, which was founded in 2013, counts Marigay McKee’s Fernbrook investments among its backers, and sells at retailers including Net-a-porter, Harrods, Asos, Selfridges, Bergdorf Goodman and Lane Crawford.

Earlier this year, the brand relaunched its web site, and the plan is to create dedicated sites in Arabic and Chinese. Around 60 percent of sales are international, with the balance in the U.K. home market.

The business, which is driven by dresses — sheer, floaty, embellished, printed and pleated — employs about 100 people, in the U.K. and India.

Coffin considers herself lucky not to have to rely on a runway show as a marketing tool.

“We have grown up in this new era of brand exposure and digital. There are choices for us. And I have never done a show because I run a business that is very, very focused on turnover. I have a board to report to, and I think that sometimes with traditional shows, it can be challenging to quantify the return on investment.”

She said digital channels, instead, are easy to measure “and therefore your decision-making can be very focused, agile and responsive and essentially drive revenue and trade. That is what investors want, and it is what the board wants. For me, it was always very important to honor my passions for being a bit of a purist when it comes to product, and doing it in a sustainable way so that the company is profitable — and protected,” she said.

Coffin, whose company has been notching annual growth of 50 percent, said when she launched, she considered doing runway shows, but decided against it.

“The reason that I get up in the morning is to dress women. I am not motivated by the encore or the validation from the industry, although that is something that we all thrive on,” Coffin said, adding that praise from the customer is more important, “because she buys it, and she repeat buys it. That is what I am here for.”