NEW YORK — Never let it be said that Dan Brestle, group president of the Estée Lauder Cos., doesn’t have a feel for what his employees do on a daily basis. 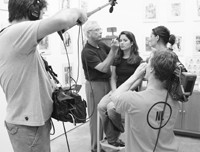 NEW YORK — Never let it be said that Dan Brestle, group president of the Estée Lauder Cos., doesn’t have a feel for what his employees do on a daily basis.

Brestle, who oversees Lauder’s specialty brands, is joining five other top corporate bosses in a six-part series, “Now Who’s Boss,” which will premiere March 7 at 10 p.m. on the TLC cable channel. Thereafter, the show will air on Mondays at 10.

The premise of the series: Putting the top dogs in entry-level jobs in their firms. Brestle’s spot features him doing tasks at Stila Cosmetics, one of the many brands he oversees in his day-to-day life. His tasks are a little more down-to-earth than his normal duties. During the show, he drives a forklift in the distribution plant, performs in-store makeovers, flames lipsticks on the Stila assembly line and presents his ideas for the next Stila girl to the brand’s founder, Jeanine Lobell.

“It’s interesting to get out of your own comfort zone and walk in someone else’s shoes,” said Brestle. “It’s key to stretch yourself to be an effective executive.” And there was one very important fashion lesson that Brestle learned as he was getting styled to work at the Stila counter: “Pleated pants aren’t cool.”