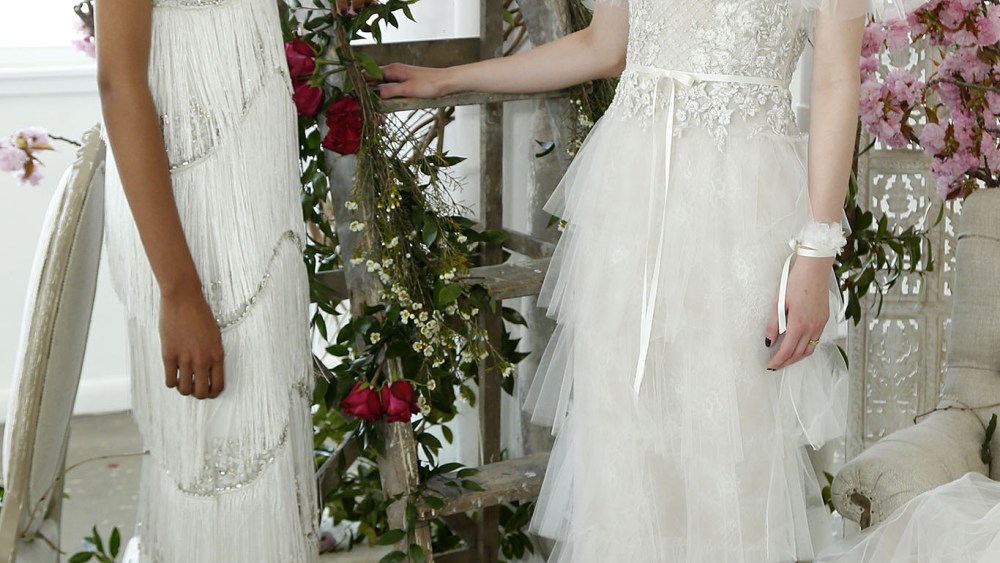 With the average wedding costing $35,329 — an all-time high — brides aren’t scrimping when it comes to finding their pitch-perfect wedding dresses.

Last week’s market provided a blizzard of options for shoppers — bows, pearls, pants, off-the-shoulder and more classic American looks among them. While $1,564 is the average going dress rate for brides-to-be, many of the designers were catering toward customers with bigger budgets. Kleinfeld cofounder Mara Urshel noted that her customers typically spend between $3,500 and $5,500. At a time when brides are not just becoming increasingly selective about their wedding day perks — taco bars, gelato stands, fireworks — they are also using razor-sharp precision in choosing a wedding dress. In the increasingly overthought world of wedding planning, brides-to-be can even sign up for 12-week bridal body fitness programs like L.A. Bride Body to tone targeted muscle groups based on wedding dress designs. Interestingly, their wedding day spending has gone up even though it is geared for fewer guests, according to The Knot’s Real Weddings survey.

Digitally savvy brides aren’t just scouting their options online, they also are demanding faster deliveries than the industry’s six-month norm. Urshel said “Millennial brides are so used to pushing a button and getting what they want. When you tell her it’s going to take six to seven months, she just doesn’t get it,” Urshel said. “So many brides are coming in now for July weddings. A lot of manufacturers have woken up to the fact that these brides want it when they want it. Some are now getting the dresses to them in three to four months.”

Carolina Herrera, Oscar de la Renta, Marchesa and Naeem Khan were the standout collections for Mark Ingram, who owns an upscale specialty store. The return of Laura Kim and Fernando Garcia to Oscar de la Renta has recaptured what the Oscar bride is all about, he said. Starting last year, his shoppers were interested in long sleeves, higher necklines, fuller skirts and plainer, but more architectural silhouettes, he said. With brides doing more  online research, in-store visits and e-commerce window shopping, Ingram said it’s taking longer for brides to pull the trigger. “They want to check it all out,” Ingram said. “It used to be brides would make her decision about a year or 10 months before the wedding. Now they’re coming in four to six months out from the wedding.”

As a result, Ingram’s team is dealing with more rush deliveries, which in turn could mean two or three fittings in a month. “We call them wraparounds where girls are coming in and need to have a dress altered in two weeks,” he said. Peter Langner’s 25th anniversary collection, Sachin & Babi, Christian Siriano, Ann Barge and Mira Zwillinger were among Ingram’s other favorites. The retailer was reached Wednesday in Barcelona where his friend Angel Sanchez was presenting his collection and being honored, during Barcelona Bridal Fashion Week.

With two outposts in the U.K., Mews Bridal invited editors to its two-month-old West 28th Street store where five to 12 brides have been shopping each day. Lauren Crispin, director of The Mews Bridal New York, said the average purchase in the new space is $4,000. Elie Saab took a more temporary approach opening a pop-up store in a stately Midtown address. With e-tailers such as Modus Operandi, Shopbop and Net-a-porter taking the category more seriously, there is also a newcomer at the other end of the spectrum — Topshop has added wedding dresses including a $650 satin tie-side style being an early favorite.

Nordstrom bridal and designer evening buyer Sharon Wikstrom said, “We loved the chic, clean looks at Carolina Herrera, Sareh Nouri and Anna Maier. Satin and Mikado are back along with plenty of bow detail and wonderful off-the-shoulder styles. Last but not least blush — we saw beautiful gowns in all shades of blush.”

Carolina Herrera president Emilie Rubinfeld said, “The retailers really find this collection to be the epitome of Carolina Herrera so all of the iconic details and elements really reflect the essence of Carolina Herrera — the femininity, the elegance in silhouette, the clean lines, exceptional fabrics….If there’s any indication from the enthusiasm of our clients, we’re confident that the brides who come to the Carolina Herrera label because of the strong codes of the house will find their perfect dress.”

“Very encouraged” by the current season of bridal, Rubinfeld said, “what we love about bridal is that it really broadens the audience for our collection so the woman who shops bridal can transition into the newlywed who shops Carolina Herrera ready-to-wear. And the purchase of a wedding dress is a family affair, so when we have brides coming into our boutiques and accounts, they bring their families particularly their mothers, their sisters. It’s an opportunity for a whole family to fall in love with Carolina Herrera.”

Kleinfeld’s Urshel gave high marks to Liancarlo, Ann Barge, Hayley Paige, Lazaro and Reem Acra. And even though the debut collection of “Say Yes to the Dress” star Randy Fenoli’s collection won’t be available to shoppers until May 4, Kleinfeld, the setting for the TLC show, has already sold “quite a few,” she said. In general, $3,500 to $5,500 is the preferred price range for Kleinfeld shoppers, Urshel said.

Aside from being really excited to pick up Marchesa Notte, Lovely founder Lanie List said the market seemed to return to the basics with a “really good fit, really good fabric and subtle details,” she said. “It’s just cyclical. We had that whole beaded ‘Great Gastby,’ ‘Downton Abbey,’ Jenny Packham thing then we went through the Bohemian cycle, which still stuck a bit with Coachella continuing to be popular. That free-spirited look is always going to exist but maybe not for everyone any more. Now we’re cycling through that Nineties clean, classic look which I’m thrilled about. Those gowns look beautiful on a woman’s body and make them so happy,” she said.

With 12 owned and franchised stores nationwide, Lovely will open another in Seattle this fall. “We opened seven in the past 18 months and I didn’t anticipate that,” said List, who opened her first indie bridal shop in the West Village in 2010 at a time when some hipper brides were buying wedding dresses on Etsy sight unseen. “We wanted to create a cool environment while representing these young talents. We thought it would be the perfect storm and we just got slammed when we first opened in New York.”

In addition to her Legends and Romona Keveza collections, Keveza now has another label to her assortment — Romona. That entry-level collection runs between $1,200 and $2,600 and was presented in the designer’s showroom with illustrations from former Dior Beauty artist Jamie Lee Reardin. Yumi Katsura is working on a different kind of artistry. A Sony-produced documentary, “The Yumi Katsura Story: Dream Chaser,” will be released on streaming media and on-demand video this fall. In business for 52 years, Katsura has dressed nearly one million brides in Japan. Just as brides want more experiential weddings, the 84-year-old designer dressed up her New York “Rhapsody in White” presentations with afternoon tea and jazz performances at the Baccarat Hotel.