Remember when the runway thrilled, awed, inspired? Some designers still embrace that mandate. 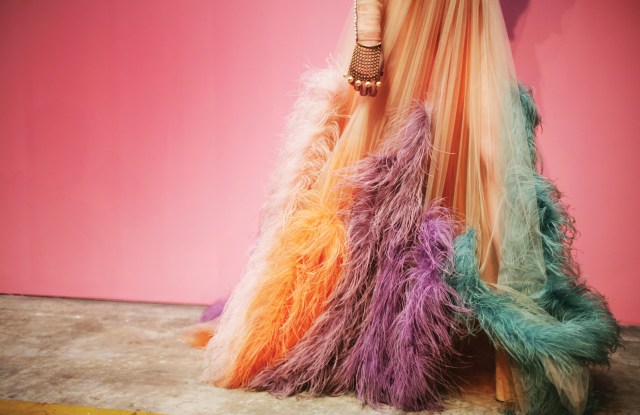 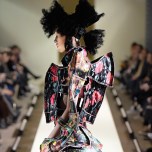 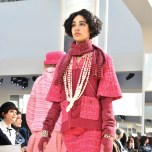 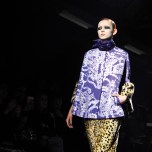 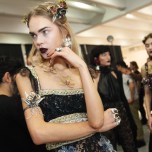 Creativity. There was a time when it fueled the fashion seasons. When what was on the runway dominated the conversation during the shows and in their immediate aftermath. What was extraordinary? Who went too far? Was there a greater sociocultural subtext? How would women respond? The conversation felt compelling and essential.

This season, the hottest topic — even more than that surrounding the designer departures and pending hires (culminating so far in the tapping of Anthony Vaccarello at Saint Laurent) — was about scheduling: see-now-buy-now-wear-now vs. see-now-buy-and-wear five or six months from now, as deeply ingrained in the industry tradition and current practice. Understandably so. The timing of the fashion shows — when they’re presented, how and to whom — is a multitiered behemoth encompassing business, process and creative elements.

Yet the how, the when and the whom matter little if the what gets lost. In all the talk about schedules, consumer timing, consumer demand and whether or not the current system still works, woefully little time was spent discussing what should be front and center through every fashion season — the clothes. That’s probably understandable as well, as “fashion season” has become an umbrella over a universe with numerous increasingly divergent purposes at play. Much like a university academic semester during which various students are working toward a bachelor’s, Ph.D., semester at sea or NBA-draft readiness, fashion’s runway seasons now serve as amorphous handles for whatever goods and brand messages hundreds of companies want to transmit. But just as the overarching focus of an academic semester should be education, the overarching focus of a fashion season should be the clothes. In the aftermath of fall 2016, how much attention was focused on the different strata of clothes shown, their end uses and the processes that distinguish their various levels? If one were to happen upon the conversation completely devoid of knowledge or context, he or she could easily conclude that what’s brought to market matters not a whit, as long as it arrives at the right time — right now.

The truth is that a great deal of what’s shown on the runway, probably the majority of the near-400 shows from opening day in New York to the final buzzer in Paris, is — from a visual interest standpoint — to be endured. That sounds rude and dismissive, but it’s true. Most of what’s on the runway is there for reasons other than runway worthiness in the traditional sense. That’s OK; times change. But as we take an expanded view of what merits runway attention, it’s important that slickly marketed, pragmatic fare not overwhelm genuine fashion. One discussion — particularly one about timing — cannot apply equally to all participants. The fall shows offered pockets of remarkable creativity — beautiful, challenging, inspiring. They should be celebrated.

Runway creativity has nothing to do with designer mandate — that notion died years ago. Nor can it be written off to the mythic third-sleeve school of fashion typically attributed to Rei Kawakubo (though the vast majority of her work indicates a predilection for the one-torso-two-sleeves approach, however piled on it may ultimately become). Certainly, after all these years, Kawakubo remains lauded atop the creative pinnacle, and the topic of her show — 18th-century punk, with its implicit references to revolutionary thought processes and behavior — offered still another example with its powerful constructions rendered in old-world florals. Kawakubo’s approach at Comme des Garçons places provocation first, with direct links to the consumer closet left in the showroom (where there are plenty. By her own account, this artiste is a businesswoman first). Conversely, Miuccia Prada does both, wrapping concepts of perfect wearability in high-concept, intellectual musings and, this season, external corsets topped off with sailor caps.

These designers want to sell: they are in this industry at least to some degree for the money. They are not stupid people: they’re concerned about speed to market, about instant global exposure, about fast-fashion knockoffs. But at the luxury level, designers design. Most are passionate about their craft. They care first and foremost about having something to ship that’s worthy of the label.

For Thom Browne, that means cinematic sets, such as this season’s Depression-era park, as the backdrop for imaginative tailoring; for Consuelo Castiglioni at Marni, a modernism upended, as with fall’s Renaissance tropes. Alexander McQueen’s Sarah Burton offers couturelike reveries. Simone Rocha has turned simple floral outlines into a signature. Rodarte’s Kate and Laura Mulleavy continue to develop daywear as they experiment with euphoric decoration sprung from points of intensely personal references. The list goes on — a bit, for those paying attention.

In mulling the apparent downgrade of creativity as a topic for discussion, my mind went to conversations I had with several designers throughout the season. Most were casual preview chats, but they revealed the designers’ deep commitments to invention and creativity.

Alessandro Michele, whose Gucci has awed fashion with gentleness, talked about broadening the perspective of his first seasons. “I’m working more with some of my passions,” he said. “One is street style, one is Renaissance, the Seventies and a little injection of some chic points of the Eighties. I love to mix and match [references] into another language.” Then there was his collaboration with Trevor Andrew, aka GucciGhost, an unexpected element after Michele became aware of Andrew’s work little more than two months before the show. “The idea is to transform Italian Renaissance costumes into street style costumes.” A daring proposition worked through with intrigue, if not total resolution.

Karl Lagerfeld is loath to talk artistry when it comes to clothes. Nor is he big on articulating the P-word (passion), his one-liner “I make dresses,” a frequent quip. But at his core, Lagerfeld couldn’t be more passionate, nor more committed to the creative process. To the contrary, Lagerfeld’s Chanel is the wonder it is precisely because of the invention he brews within a specific and hallowed framework. Though fall was one of his more classic collections in recent memory, proportions were elongated with skirts unzipped at the sides to reveal contrasting linings. Camellias came in outsized prints on pants, a T-shirt anchored an off-the-shoulder evening dress and as for pearls, “oversize and overvolume,” he said. As for other extras, his dominant footwear was a clunky-chic boot, with its shoe and embroidered tweed upper laced together. “It’s air-conditioned,” he said. Often the glory is in the details, including the buttons. Lagerfeld commissions “something like 1,000 different buttons a year” from the Métiers d’Art house Desrues. He knows how to show it all to best advantage, the essential Chanel accessories included. During a fitting, he ordered a fresh-faced model relieved of her handbag. “Young girls have problems managing handbags,” he offered in his staccato drill. “Runway horses, they know how to do that.” (A little off-topic but smart amusement from someone who views the creative process as a whole, right down to the perfect way to grasp a bag.)

Dries Van Noten looked to the passionate relationship between Marchesa Casati and Gabriele D’Annunzio, “on one side,” he said, “the woman who wants to be a leading work of art and the other side, the poet who wanted to make decadence a lifestyle.” The result was a collection that spoke to the historical danger of gender fluidity with interesting, real clothes delivered with high flourish from all kinds of snake motifs (the Countess supposedly wore one as jewelry) to spills of “broken pearls.”

Creativity permeates process. John Galliano spoke about his collage approach developed in his artisanal couture collection, which also informed the ready-to-wear. “We worked a lot with the humble idea of a collage and tearing papers, which I really got into. Which, within the artisanal, not only developed as a surface decoration but as a way of constructing garments or mixing garments….I just start ripping, and that emotion and that line became something with the artisanal that also helped refocus the silhouettes and shapes, which is quite interesting.” He spoke, too, about how seemingly unrelated stimuli can directly impact his work. Case in point: music. Galliano maintained that a frill cut to Schubert would look very different than one cut to flamenco. “You would get nuances, and it would be faster and slower and calmer and deeper and shallower,” he explained, “as opposed to a mathematical three centimeters.”

Joseph Altuzarra took inspiration from the film, “Only Lovers Left Alive,” not the storyline itself, but the characters’ curiosity and esoteric tastes. “It inspired me to be very curious about a lot of things,” he said. His design process started with a photograph of an Inuit parka in a floral pattern, “an interesting dialogue with something so utilitarian and something so decorative.” That dichotomy revealed itself variously, in intense patchworks and, more subtly, in the layering of an airy bandanna print dress over a striped sweater.

Marc Jacobs ran off a litany of elements that coalesced into a remarkable collection. “There’s denim all over the place. A vinyl dress, yes, it has Lesage embroidery all over it. Sweatshirts and sweatpants. Repurposed furs, things we took from our archive, a new coat we made and a new fur and an old fur collaged together. Ballerinas and roses, men’s wear, ladies’ wear, cats, dogs, mice, the great artist Taboo who did all the little mice and cats and crows. There are twigs and flowers, thorny roses and stuff like that. We were thinking about Christina Ricci and all of the girls we love. That kind of thing. Tweed. Velvets. Crochet. Knit. Sequins. Beads. It all started with an oversize sweater…that’s really all I have to say about it. I mean, it’s just fashion.”

“Just fashion” involves skill, tenacity and invariably, countless hours of trial and error. Vera Wang found herself working in homage to “the extreme proportions of Giacometti’s work.” In less grand terms, she said, “it’s my reaction to seeing a lot of minis,” while noting the tribulations of the process, not as woe-is-me, but as matter of fact. “Even a week before, I’m not sure myself where it’s going or what the nuances will be. It’s like this adventure almost every single day, which is exhausting and scary. But it is my process.” Wang noted that it’s not just the grand thematic elements with which she struggles, but the nitty-gritty; for example, finding the perfect weight for a runway kilt — not thick enough lacks purpose; too thick telegraphs clunky — and after, whether that weight translates exactly to the commercial collection. “It comes down to grams of wool, or combining scuba with wool and having them come out in the same color range,” she said.

Fashion has changed tremendously over a relatively short time, Wang noted, first impacted by the explosion of celebrity culture, and then, by social media. “I still do believe there’s room for an artistic vision and craft,” she said. “I don’t know where fashion would be without thinkers.”

Most of the designers mentioned here would argue that playing to the instant gratification of see-now-buy-now will inevitably impede genuine creativity. That’s certainly true of Valentino’s Maria Grazia Chiuri and Pierpaolo Piccioli. Inspired by Sixties performance art, their fall collection ranged from modernist jerseys to an oddball ballerina dress in PVC and tulle, a crystal-clear testament to their belief that fashion without emotion is a mere grab-and-go. “To be in the moment [of the show] is important,” Chiuri said. “You can see and you can feel as well. You can also buy, but it is not true that fashion is only to buy.”

“If everything is approachable, it’s not magic,” Piccioli said. “It’s just clothes.”