Donna Karan and Patti Cohen became linked as indelibly as any great pair — Lewis and Clark, Abbott and Costello, Bert and Ernie. 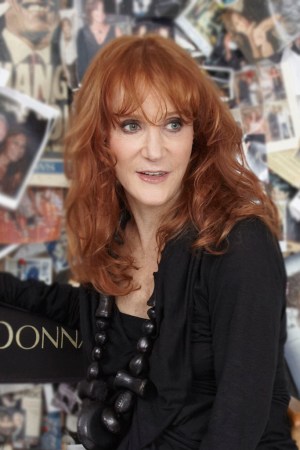 The tennis club on Fire Island matched opponents according to skill. One day many years ago, after most pairings were set, two women remained on the bleachers. They introduced themselves one to the other as Donna and Patti, clueless at the time that their names would, among a limited circle, become linked as indelibly as any great pair — Lewis and Clark, Abbott and Costello, Bert and Ernie. After years of friendship, Patti Cohen would go to work for Donna on May 16, 1983, and (save for a four-month hiatus midway through), leave exactly 32 years later, her last official day Friday, May 15, 2015.

The tennis ladies talked a bit before hitting the court. Later, Patti discussed her day with houseguests, including her woeful tennis loss to a long-armed woman named Donna Karan. “Don’t you know who that is?” exclaimed a friend whose mother had a fashion store in Baldwin. “She designs Anne Klein!” Patti didn’t. The next week Donna was a tennis no-show, but returned the following week with an explanation. She and her partner Louis Dell’Olio had gone to Bloomingdale’s to meet the Queen. Yes, that Queen. They took the subway — doubly pragmatic: it stops at Bloomie’s, and Donna could stand en route so as not to wrinkle her linen look.

The friendship blossomed, first with Donna, her first husband Mark and daughter Gabby and later, Donna, her second husband Stephan Weiss and their children of both. “Harvey and I didn’t have children,” Patti says, referring to her husband during a Sunday morning phone conversation from the beach; she and Harvey had driven out first thing on Friday, just as her departure was announced in-house. “They were our family.”

Back then, Donna cooked all the time and was fabulous at it, according to Patti, who says, “I would clean up behind her when she was making a mess. That’s very funny when you think about it.”

One day, Donna mentioned a project she wanted to start, Anne Klein II, and asked Patti if she’d help on a freelance basis. She did. Soon thereafter, Donna started talking about a different kind of collection, something smaller and more intimate. Anne Klein principals Frank Mori and Tomio Taki agreed to back her, papers were signed and Donna Karan New York was founded. Donna asked Patti to join full-time and she did, knowing neither job description nor salary. A loft was promptly procured to house the company at 80 West 40th Street, where my colleagues Tommy Iannaccone and Bobbi Queen did the first Donna Karan shoot ever.

So many memories. The first show, the seven easy pieces for fall 1985, made a huge splash. Bergdorf’s Dawn Mello installed windows giving all of Fifth Avenue to Donna, who, in Rhoda Morgenstern mode, dressed the mannequins herself. Mello scheduled a trunk show as well; Patti recalls Donna literally selling the clothes off her back and going home in a bathrobe.

At one show, “you had to wear a helmet like a light so you could see the clothes.” The photographers walked out of another, due to cramped conditions at 550 Seventh Avenue, where the company relocated early on. Patti sat in the audience as a guest; she’d left the company for reasons that were her own, only to return four months later. “I died,” she recalls of the photography disaster. “I felt so horrible for all of my people.”

The campaigns, first with Peter Arnell and later, Trey Laird. Mello recommended Arnell. Patti went to see him on Grand Street and, blown away, insisted Donna rush over to meet him. “She came the next day and that was it — everything started.” They hired model Rosemary McGrotha as a Donna stand-in of sorts, the pictures capturing “the chaos and the craziness of her life.” Once, Donna called Patti at midnight and said, “I want to shoot her running for President.” Patti called Arnell “and two days later we were in Miami shooting Rosemary running for President. When you look back, it’s just incredible. Everything is so planned now. Then it was, ‘I have an idea. Let’s make it happen.’ It was never ‘no.’”

Another groundbreaking campaign: The Laird-produced series featuring Demi Moore and Bruce Willis. “It wasn’t about ‘let’s shoot a celebrity.’ They were Donna’s friends. There was so much creativity. You didn’t have to do a focus group.”

DKNY happened out of conversation between Donna and Jane Chung, a member of the design staff who would become the new line’s principal designer. Arnell was looped in and came up with a video showing that DKNY “could be so much bigger than clothes. It was about a lifestyle, life in general, ageless, people, men, women, children. Everyone got so inspired. It was an amazing time and those shows — do you remember the Church Lady show?”

A trip to Australia came at the invitation of the Wool Bureau for an event that included Oscar de la Renta, Claude Montana and Donatella Versace. “We were so scared of them,” Patti says. “I remember Jack Alexander and Oscar, they were so wonderful with us, so helpful. Princess Diana came to the show. I remember Elle MacPherson in a bodysuit. I remember Oscar got on the plane in a shirt and tie; he looked so amazing and fantastic. And 20 hours later, he looked exactly the same.”

Over the years, Patti built her office “Wall,” a giant collage of essential imagery — photos from shows, campaigns, personal appearances, mood boards, anything that struck her fancy or moved her emotions, things one might post on Instagram today. “The Wall — it’s very deep. It’s got a lot of things on it,” she says.

That wall has chronicled a great deal of change within the company, and by extension, the greater industry. “It was more intimate,” she notes of the industry past, her tone just to the wistful side of matter-of-fact. “When do these people have time to create? They constantly have the marketing people and public relations people at them: ‘What’s the next thing? How do we put it out there? How do we make a lot of noise?’ You’re watching what everybody else is doing — ‘I have to have that, I have to be on that platform, I have to be over here’ — without stopping to think, ‘What’s right for me?’ It does become vanilla.”

As for herself, she’s too emotional to speak specifically about Donna right now but says, “the friendships I’ve made go far beyond the job.” She got up early today to go for a run, and late last week took in the Chinese exhibit at the Met — on a workday afternoon, marveling at the freedom. But she doesn’t see herself as a lady of leisure. “The press release for every show ends with ‘To be continued…’” Patti says. “Well, that’s it.”