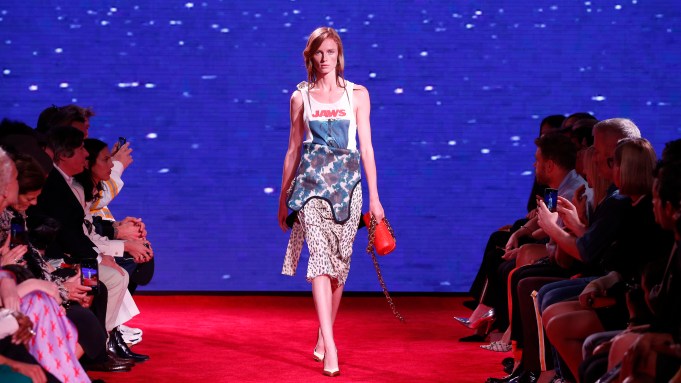 The season was packed with news, on and off the runway. Some fashion was great, some, not so. There were anniversaries, a retreat from street, a major trans-Atlantic sale. Here, a far-from-exhaustive list of points of interest from spring 2019.

It’s Personal. Rei Kawakubo and Miuccia Prada on a wavelength? Only in that both approached spring in deep-thoughts reevaluation mode. As per the rare statement she sent out before her Comme des Garçons show, Kawakubo advised of a shift from her powerful, abstract approach to something “quiet, serenely internal.” Her models wore faux-pregnancy padding, an apparent reflection on the responsibility of creation. Her clothes, she offered, were now “free of design on the surface.” Mere mortals would beg to differ. Prada’s contemplative mood was brought on by external forces. She sought to simplify her clothes, she said, “because eccentric pieces aren’t worn by many people.…And fashion needs people who care.”

Fabulous at Fifty. It was something fashion hasn’t seen before: A 50th anniversary with the house founder still at the creative helm — and calling a lot of the business-side shots as well. Ralph Lauren’s fete at Bethesda Terrace in Central Park proved just about perfect for the moment, the presence of Oprah Winfrey and Hillary Clinton speaking to the man’s and the brand’s importance to American culture beyond fashion. As for the show, it was Lauren’s best in years, rich with emotion and beautiful clothes.

Making Waves. It was springtime aquatic. Raf Simons showed his Calvin Klein 205W39NYC against the opening of “Jaws” projected on giant screens, the terrifying duun-dun, duun-dun, soundtrack creating fearful anticipation. Turns out, Simons kept the Great White at bay. Conversely, some pretty scary creatures showed up at Thom Browne. During a preview, the exquisitely crafted clothes on view suggested a witty, over-the-top preppy romp. But at the show, models wore masks with the lips sewn shut and sea-creature getups that bound their arms. Thom, what were you thinking? Then there was Chanel. Karl Lagerfeld’s unnatural wonder of a beach installed inside the Grand Palais presaged a lineup of joyful clothes that played to fashion’s most basic tenet: to delight.

Surprise! Not. The season’s most anticipated show, Hedi Slimane’s debut at Celine, garnered the most impassioned reaction, including a great deal of shocked outrage. It looks like his Saint Laurent! Mon Dieu! But why the fuss, Gus? Everything in Slimane’s visual résumé, beginning with Dior Homme and through his Saint Laurent years, indicated a very specific aesthetic. Presumably, LVMH hired him to do what he does, which is what he did here. If there’s a surprise factor, it’s the timing — that LVMH chose at this particular cultural moment to turn away from the beloved, pragmatic artfulness and woman-to-woman problem-solving approach established by Phoebe Philo. Perhaps its execs felt that Jonathan Anderson is developing an artful ethos at Loewe, while Dior’s Maria Grazia Chiuri delivers the feminist message.

Where Have All the Hoodies Gone? In truth, they didn’t completely disappear. But one couldn’t miss the marked retreat from street this season. Hallelujah to that. Yes, designers should soak up inspiration from the real-world stimuli around them; they can and must address it and market it. But it becomes problematic when pilfering and marketing trump actual design. Because a four-figure hoodie looks much like a three-figure hoodie which looks much like a two-figure hoodie. And consumers aren’t stupid.

Unabashed Fashion. “If you’re going to get dressed up, get dressed up,” Marc Jacobs said of his fanciful over-the-top parade. Valentino’s Pierpaolo Piccioli wanted to capture the essence of couture, and “[translate] the fantasy into reality.” At Balenciaga, Demna Gvasalia put his spin on “elegance, glamour, all the words that seem kind of taboo today.” While wildly different, the three collections were among the season’s most potent expressions of fashion.

Versace Americano. The house of Versace has a long history of connection to the U.S. News of its sale to Michael Kors Holdings, soon to become Capri Holdings, was huge off-the-runway news. Watching how it all plays out will be fascinating, beginning with whether Donatella will stay with the company and in what role (both companies said she would remain creative director and the Versaces will have a stake in Capri). And will Kors/Capri focus on accessibility in terms of pricing and distribution? Versus aside, approachable luxury isn’t what first comes to mind with the name “Versace,” although the brand codes, (short, hot, sexy; scarf prints galore) certainly lend themselves to playful trickle-down. On the other end, what of Atelier Versace (couture)? Bigger picture, can a genuine luxury group flourish in the U.S.? We’ll see.

A Little Romance. Rodarte’s Kate and Laura Mulleavy delivered it with otherworldly eeriness and infinite tulle, Alexander McQueen’s Sarah Burton, with tribal intrigue. Both were beautiful and reminded of the importance of evocative storytelling in a marketing-driven age.

Gender Matters. A timely topic many designers felt compelled to explore. At Maison Margiela, John Galliano did so most demonstratively in a strong coed collection that saw men walk as comfortably as their female counterparts in regalia such as a golden brocade dress and cape over pink holographic leggings. Givenchy’s Clare Waight Keller was inspired by Swiss writer Annemarie Schwarzenbach, who lived in the first half of the 20th century unbound by sartorial conventions of female and male. Conversely, Yohji Yamamoto’s not a fan of genderless dressing, which, he said, has contributed to young boys losing their identities. He celebrated gender-specific allure by upping the sensuality of his women’s clothes.

Vive la Casting Diversity! It’s great, if a bit of a shtick. Yes, the racial diversity we’re seeing is notable if not exactly admirable: It was long overdue. As for the diversity of “type,” yes, we’re seeing curvier women on the runway — a few — as well as some models beyond regular runway age. Isabeli Fontana, Tasha Tilberg, Amber Valletta, Kristen McMenamy all hit the runways this season, looking great. So, too, did “real people,” whether the family-and-friends folks at Ralph Lauren and Sonia Rykiel or the athletes at Off-White. But come on. Most women (many of whom I would call “girls”) on most runways are still great-looking within traditional standards of beauty, and most are still tall and thin. That’s not likely to change dramatically; they’re models. The real test of whether runway diversity is a momentary marketing ploy or the genuine new norm will unfold with time, as we see if castings continue to reflect ethnic and cultural diversity, and if models past their early 20s (“older” is a relative term) become a constant rather than a cameo.

Logos. Street may be on the wane, but not logos. Brands’ celebration-of-self was everywhere, often big, bold and indiscreet — the better to Instagram you with, my dear.