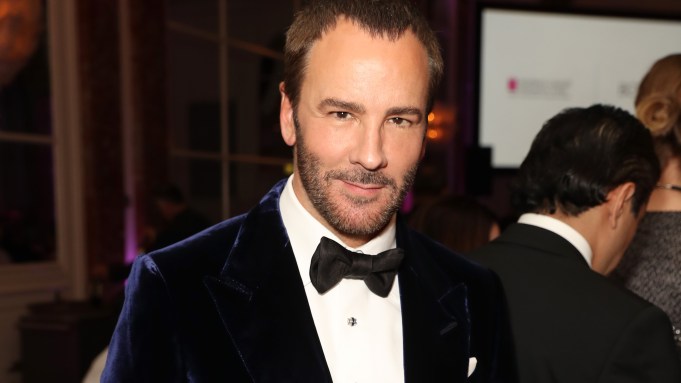 The big, flat box of Dunkin’ Donuts, assorted varieties, sits open, one column short of the dozen, the only non-minimalist appointment in sight. It graces a sleek table in the upstairs seating loft at Studio 2 at Spring Studios. Tom Ford swears that the box isn’t a regular-guy prop, that he has in fact feasted on the missing sugary quartet this morning. “Four doughnuts and three cups of coffee.” When I express skepticism, he insists it’s his typical morning intake. “What?” he fakes reciprocal dismay. “I only eat fish and vegetables the rest of the time.”

The balance works. Dressed in an impeccable lean-cut suit with shirt and tie, Ford looks as svelte as ever and classically debonair, having left the open-to-there shirts of his slightly younger self behind. Yet I wasn’t invited to talk doughnuts or Ford’s eternal good looks. The primary topic: his decision to “abandon” (his word) the see-now-buy-now approach to showing that only last season some progressive industry thinkers considered at the vanguard of best practices. Ford tried it, staging a tony, civilized affair at the former Four Seasons restaurant in New York. The show proved a crowd-pleaser and the clothes, impressive, garnered him an explosion of press and a major postshow selling spurt. But ultimately, the construct didn’t work, so he’s moving on.

That was just the start of his news. Beginning with spring 2018, Ford will show his women’s wear on the traditional schedule, but in New York rather than in his recent base, London, while continuing to present men’s in Milan, “and not mixing them, at least not regularly.” He’ll likely seek an early slot on the New York Fashion Week calendar. “I like going first,” Ford says. “People are in a good mood. You have to think of the psychology. People have had their summer, they’re not worn out yet from fashion.”

Ford is not only exiting fashion week in London. He and his family, husband Richard Buckley and son Jack, are moving from there to Los Angeles, where they’ve recently bought a heck of a house. It once belonged to Betsy and Alfred Bloomingdale, and had a reported, though most definitely unconfirmed, purchase price, of $39 million. (By the way, Ford offers that Jack is “adorable and freakishly smart.” A photo bears out the former condition; as for the latter, we’ll have to take the proud dad’s word.) And Ford has signed a lease on a studio space in L.A. — the old Regen Projects gallery (yes, Hedi Slimane’s former studio) — where he will relocate most of his women’s design staff, while keeping the men’s studio in London. Phew!

Ford came to New York for a day of press appointments on Thursday. Fall 2017 “is sold and done. But I wanted to bring it to New York and show New York editors,” he says. The trip was arranged hastily, as for a while, he was uncertain how or even whether to show fall after his decision to forego the runway this time out.

The reason: His preoccupation with thinking through his retreat from see-now-buy-now, and what other alternatives might exist. Since reentering the women’s arena, Ford has been in the forefront of experimentation with methods of showing, garnering high praise and vivisection for various efforts. He works from an almost scientific resolve, experimental in the true sense of the word: He goes all-in to test a promising hypothesis with a conviction rare in fashion.

“I don’t have fear,” Ford says. “You have to do what feels right, you have to try things. I don’t let fear stop me. It doesn’t mean I don’t second-guess myself constantly, right up until the end — ‘Oh my God, is this right, is that right? Should that be that? Should I have kept this off? God, should I make those skirts out of Lycra?’…And blah blah blah. But you can’t let that stop you.”

When efforts haven’t worked, he’s admitted it. Now, he muses, only half-joking, that all the luxury types who pooh-poohed the buy-now concept — which were just about all the luxury types but for Ralph Lauren and Burberry’s Christopher Bailey — will garner some satisfaction from being proven right, for the moment.

Yet he still believes that immediacy is the ultimate way of the future. “Doesn’t everyone want everything now?” he queries, rhetorically. However, in the present, see-now-buy-now can’t work for a very simple reason: The industry’s numerous schedules aren’t in sync.

Ford notes he had no production issues — “we shipped in July” — and that during the three weeks immediately postshow, business boomed at retail. Overall, however, “The store shipping schedule doesn’t align with the fashion show schedule.” The bulk of fall ships in August, “but you can’t have a show with clothes that have been on the selling floor for a month.” Ford kept his off the floor until the day after the show, insisting that his retail partners did the same. “We lost a month of selling. We had merchandise sitting in stockrooms all over the world.” Many of those retailers, though at first excited by the prospect of see-now-buy-now, grew frustrated that the clothes had to be kept under wraps until September.

Ultimately, the focused frenzy didn’t make up for the loss of traditional long-lead press and the additional selling time. Spring would create a different issue, given its shorter lead time. “Our clothes are just now fully in the stores, and we have missed all the fashion weeks,” Ford notes.

Thus, his return to the traditional schedule. And his permanent (at least for now) runway migration to New York. After the success of his second directorial film effort, “Nocturnal Animals,” Ford wants to spend the next few years focusing solely on fashion. He is definitely in growth mode, particularly with women’s. Men’s accounts for about 60 percent of his business and women’s, 40, a ratio he’d like to reverse. But he admits to a stronger comfort level in the men’s arena. “I’m my own muse. On a good day, I can look 45. I’m a sample size 48, and if I want it for myself, I make it.” A recent addition, underwear, in store for fourth quarter, is men’s only for now. “I thought it was time my name was wrapped around the hips of 25-year-old men, boys. I’ve been waiting to say that,” he offers, in his typical deadpan delivery.

He thinks that having a regular presence on the traditional women’s schedule will support a structure that will benefit that side of the business. “I need a home for fashion shows and a consistency, so that you can start to think, ‘OK, this is where he shows, this is what it’s about, this is what he did last season, this is what he’s doing now. There’s a certain consistency,” he says. “Paris is crammed full of competition; Milan, been there, done that.… London, I’ve tried and tried and tried, and honestly London Fashion Week is not the same. It doesn’t attract the international press. So I needed to pick one. And the shows I’ve had in New York have worked very well.”

The residential move, from London to Los Angeles, is more nuanced. Having spent the better part of a year in Los Angeles because of the film, he was reminded of the appeal of sunshine after 18 years in “dark London.” That move is a homecoming of sorts, a concept that appeals to Ford now more than ever, as a family man who’s admittedly no spring chicken himself. “I grew up in the American West. The older I get, the more pulled back I am to a more rural…” perhaps conjuring images of his soon-to-be-residence, he rethinks “rural” “…I need sunshine. L.A. is the least city of all cities.” His parents live on the West Coast, as does his sister and her children. “Jack has a family there. A lot of it is personal.”

The presidential election also impacted Ford’s decision to move, surprisingly so. Unlike those celebrities who vowed in its lead-up to leave the country if Donald Trump won, Ford found an opposite pull. “Oddly, it made me want to come back even more,” he notes. “We have a tremendous number of people in this country who feel disenfranchised and clearly we are not relating to or speaking to them. I am at my core American, and it made me want to come back. It didn’t make me want to run away.

“I think when you sense that there is a divide in your country and that there are people who perhaps you’re not relating to, and that those of us who are fortunate enough to live in a world of very liberal human rights and privilege, it’s a wake-up call that we’re not addressing a big part of the country that does feel disenfranchised. It made me feel more nationalistic, if anything. The whole country is not like New York and L.A. and the world that I am used to living in.”

Tom Ford Gets Into Men’s Underwear