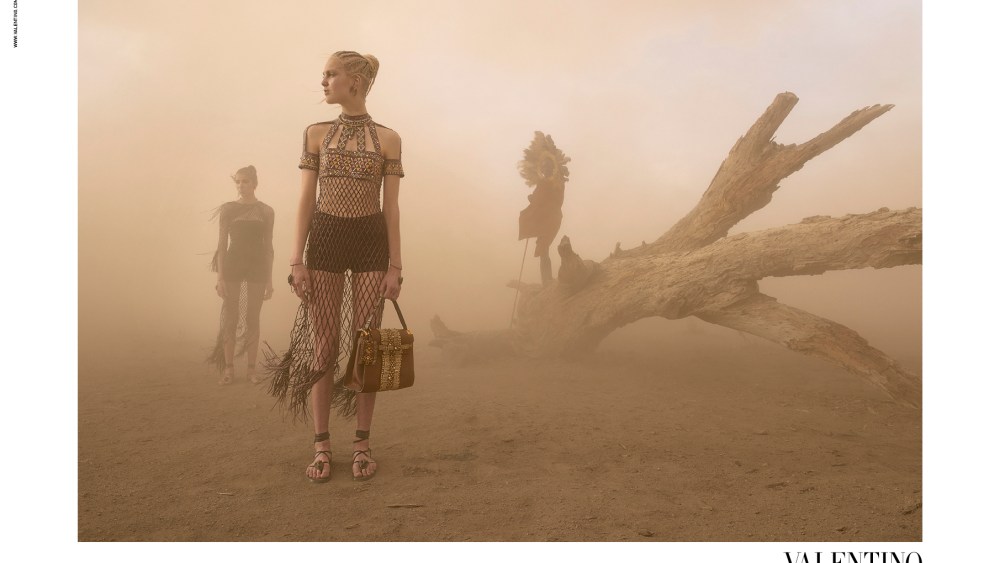 If you were lucky enough to have been there, you remember it. You remember the power of the clothes — their intricate, captivating graphics. The communal swell of emotion. The wonder-upon-exit that led Karen Katz to note, “This is why we’re in fashion.”

Maria Grazia Chiuri and Pierpaolo Piccioli’s spring Valentino show proved one of those rare fashion jewels, a show that transports you somewhere else, visually and emotionally — never an easy trick, especially at the end of a too-long fashion season. Inspired by African tribal motifs, the show felt uplifting in the ephemeral way that intense beauty of various genres can inspire.

Given the show’s impact, perhaps the designers felt greater pressure than usual to deliver a blockbuster campaign. Or maybe their African inspiration made the campaign’s location a no-brainer. Whatever the impetus, they knocked on the door of Steve McCurry, and he said yes.

McCurry is not your average rock-star fashion photographer. He’s not a fashion photographer at all, but the brilliant chronicler of far-flung cultures whose work became famous on the pages of National Geographic. His most iconic photograph: “Afghan Girl,” the magazine’s June 1985 cover. She mesmerized the world.

To Piccioli and Chiuri, he seemed like a natural. “Our emotions about African culture, the idea of beauty [achieved by] the interaction different cultures, the idea of tolerance, this is the message we wanted to deliver,” Piccioli says. “That’s why we wanted to shoot in Africa with Steve McCurry. He’s not a fashion photographer; he’s a culture reporter…we wanted to shoot not a fashion vision [of Africa], but more of a cultural vision — and not in a studio with an elephant.”

McCurry, who currently has solo shows running in New York; Hickory, North Carolina; Forli, Italy, and Singapore, with another opening in London next month, finds fascination in fashion, drawn to its narrative possibilities. “It’s style and elegance and beauty and creating a feeling, taking, taking someone on a journey,” he says of what attracted him to the project.

For the shoot, the designers and McCurry decided upon a Maasai village between Kenya and Tanzania, a location that filled several requirements. It is visually spectacular, with ample natural diversity. The Maasai people, many of whom appear in the pictures, project a strength and dignity manifested in their regal appearance, and their native attire had influenced the collection. The location met practical criteria as well. Those involved in the production deemed it safe (not all areas under consideration were), with sufficient resources (such as number of hotel rooms) in the vicinity to support the crew. And, as an oft-used location, permits and professional cooperation would be easily secured.

A lone creative wolf while working for himself — his entourage typically is typically limited to a translator, driver and perhaps assistant or production person/troubleshooter — McCurry was drawn to the team aspect of photographing fashion. “Models, designers, and hair and makeup, the lighting. Literally, the crew often rivals the size of a small movie production. It all goes into creating this impression, this feeling,” he says.

He also embraced the notion that change lies at fashion’s core, both the clothes themselves and their photographs. “When it comes to advertising in general, it is about new approaches and new ways of showing things and surprise and working outside the box. That’s basically what we were trying to do,” he says.

In describing Valentino’s African excursion, McCurry speaks not dispassionately, but with the specificity of an artist-clinician with a task at hand, while the designers invoke the language of pure idealism. “With this collection and campaign we wanted to speak about a different culture,” Chiuri says, noting that the European notions of beauty are rooted in classical Greek ideals. “We really believe that [cross-cultural understanding] improves our cultures…and with fashion it is possible to open eyes to learn something.”

While that hardly sounds groundbreaking, Piccioli notes that everyday contact with people of various cultures is not all that common in Western Europe. “In the U.S., you are more integrated with other cultures,” he says. “We sometimes worry that Europe is not so open-minded…we have to learn to live with different cultures. USA, In Italy, it’s not so usual.”

For his part, McCurry focused on telling the story at hand. “Photography is always about finding the best solution to a puzzle and creating some wonderful feeling or scenario, making a great story,” he says. “The idea of these pictures is to take the viewer on a journey. The clothes were inspired by African motifs, [so] to take the shoot to Africa and show how these things interact and, this connection of the clothes, the models, the environment, the local people; I thought it was a great endeavor.”

The days started early for the light — 4 a.m., and there were tribulations including a massive dust storm that came, McCurry says, “out of nowhere,” with terrifying fierceness. He preferred to keep shooting, but expected someone to suggest a run for cover, lest hair, makeup and clothes get ruined. No one did, though “the power of that thing, the dust, was unbelievable.

“We were all so elated and excited,” he continues, noting that the resulting picture is among his favorites. “We thought we did something really unusual and special. I guess you can look at pictures and say, ‘oh, it was a wind machine or Photoshop or done on post[production].’ It was an incredible event, and we were so lucky, because we had only been in that location for 10 or at the max 15 minutes.”

On one hand, McCurry approaches every project form a similar standpoint.  “I think emotion love, laughter, empathy or somehow evoking some sort of a feeling is important,” he says. “With portraiture, you want to get under the skin of subject. “There’s some soulful connection, you’re really getting to know that person. That there’s a connection — somehow a person is revealing a bit of themselves.”

Looking at his remarkable portrait series “Eloquence of the Eye,” one gets what he means. These aren’t just beautifully composed, expertly executed pictures of interesting, diverse faces; rather, the viewer buys into the proverbial windows to the soul. And there’s no formula. “How that comes about is a bit of a mystery, even to me,” McCurry says. “I just think when I’m photographing people, I want to make a picture that says something about that person and about their humanity. I think it’s something I’ve learned over the years through trial and error and cultivating a way of working to try and get something deeper.”

Which is not to say the process is fully organic. He may start taking a walk with his camera, whether through the streets of Havana, Calcutta, [India], or some other spot of interest, with the attitude that, “I’m healthy, living in this incredible world,” and should be “completely open, observant, curious and let things sort of happen.”

That’s the emotion, the instinct, the soul of his work. Then there’s the skill. “Generally, with experience you know the right place, the right time, you see something, you know how to craft a picture,” he says. “Usually things happen; you don’t want to be too pushy. With experience and a sense of design, shape and composition, you come up with a number of really good pictures.”

As his body of work indicates, McCurry is drawn to far-off places, “more inspired by, say, old Havana than a shopping mall in Cleveland,” he says. “Not to say I couldn’t get into that place. [But] that’s one of the things about going to Kenya, Havana, Calcutta — you’re delighted, you’re horrified. You see great things and terrible things, but you’re never bored. You’re stretching your mind. New York is interesting. But [it’s] more fun to go to Kenya, to see how they dress differently, eat differently and live in a different way. That’s what inspires me.”

Yet he is a guy with a camera, and some beauty is universal. While models can be too aware of their camera-ready selves, there’s something to be said for working with subjects who are “beautiful, elegant and statuesque.”

Not that those characteristics are limited to the professional set. The Maasai, McCurry suggests, are all as fabulous as any runway casting, their attributes not unlike those of top models’ — part natural, part cultivated. “The Maasai have great flair and a great fashion,” he says. “They have a great look, tall, thin, regal, majestic.”

And like the models Valentino brought into their community, they’re accustomed to being in front of the camera. “There are pictures of Maasai people forever,” McCurry says. “They’re approached all the time to be photographed themselves, or by people who want to photograph in their neighborhood or whatever. So yeah, I think they’re pretty savvy.”