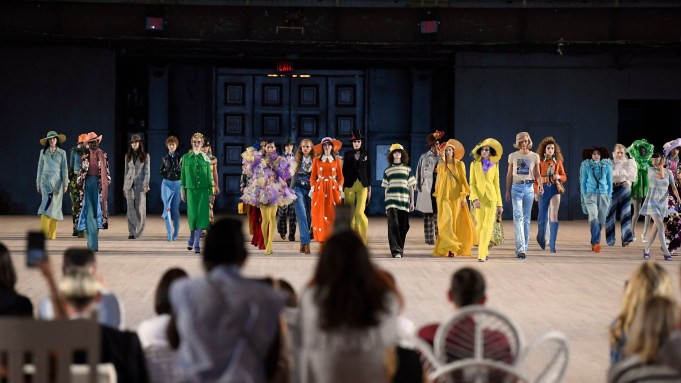 As one year and, more powerfully, one decade, roll into the next, it’s human nature to take stock of what has been, and then project ahead. What will the future hold? This week, WWD is looking at what to watch across a range of essential topics — business, politics, tech, retail, and on and on, all essential topics. Successes and failures both grand-scale and small will depend upon how brands respond to the myriad forces shaping and reshaping the industry at once-unimaginable speed.

Still, in all of the conversation around fashion, where it’s been, where it stands now and where it’s going, one very specific element continually gets short shrift: Clothes. Clothes, and our emotional, psychological, sociological connection to them. All of the broad-stroke topics that have defined the industry conversation recently — inclusivity, sustainability, technology, major group dominance and the difficulty of everyone to just stay afloat — are essential topics.

Still, once upon a time, clothes were at the center of fashion, whether in the form of an audacious collection that changed everything, a counterculture look that crossed over to mainstream, a hot item that exploded. The closest we’ve come of late was the ample discussion of the emergence, now waned, of streetwear as a major look, part of the larger — and revolutionary — casualization of the culture that’s not going away. But that’s more of a business-side conversation than a focus on the clothes themselves — the good, the bad, the fascinating.

For some of us, a basic love of clothes is still central to our interest in fashion; we love to wear clothes, love to look at them, love to discuss them, love to break down their nuance, whether as creative works or as pieces with inherent cultural significance. Alas, this seems an increasingly old-school point of view, as today, clothes too often seem way down the list of discussion checkpoints, even during collections seasons. Which is a shame. Because clothes still have the power to intrigue, to captivate, to take our breath away. Grand scale, they speak to the cultural moment, and more personally, they help us express who we are as individuals, and if we are expressing who we are, we are being who we are.

Do clothes still matter? It’s an ongoing conversation I have with people who admittedly belong to the same fashion choir as myself, who still love clothes for their own sake. Invariably we come to the same impasse. Do clothes still matter? We’re not sure. And it pains us, because clothes should matter, for what they mean to us personally and culturally, and for their beauty, creativity and power. Here, a look back in support of why we should all pay a little more attention to clothes. Exhibits 1 and 1-A go back just a couple of days to the current men’s shows. London poured out a wealth of goods, from chic to head-spinning, and now, on to Milan. The power of opposition was brought into focus by the page-one looks on WWD’s digital daily this week: on Monday, a riot of mixed patterns by Edward Crutchley, followed by a serene, supremely elegant topcoat by Jil Sander’s Luke and Lucie Meier.

The past year in women’s offered countless moments in which to revel, both on the runway and off. On the runway, there were moments of pure joy. Dries Van Noten’s beyond brilliant collaboration with Christian Lacroix — if you love fashion, you couldn’t not be taken in by the pure visual mastery. Then there was the back story on which to ruminate — two brilliant, opinionated creators who barely knew each other, coming together on deadline to create something magical. Oh, to have been a fly on that studio wall.

Another moment of unbridled fashion power: Marc Jacobs’ band of flamboyantly bedecked beauties who stormed en masse toward an audience sitting in an eccentric assemblage of mismatched white chairs in the Park Avenue Armory. Van Noten, Lacroix and Jacobs rank among fashion’s great creators. Christopher John Rogers may one day achieve that status. For spring he flaunted his pure, intrinsic love of fashion in an over-the-top romp of extravagant color and silhouette that went a long way in securing last year’s CFDA/Vogue Fashion Fund top prize. And in a go-big-or-go-home moment, Balenciaga’s Demna Gvasalia went big, transferring his love of volume to out-to-there gowns that can deflate from their runway girth for real-life use.

Sometimes designers took common fashion tropes in new directions. Case in point: flowers, one of fashion’s most enduring themes. Alexander McQueen’s Sarah Burton achieved romantic bravura in giant, sculptural rose dresses for spring 2019; Miuccia Prada extracted all traces of sweetness with big, often 3-D floral accoutrements on day clothes for fall. In an ode to love, Valentino’s Pierpaolo Piccioli combined roses, Jun Takahashi’s embracing lovers and lines of poetry in a heady presentation. And with its graceful, diaphanous gowns beset with outsize flowers, Vera Wang’s lyrical spring 2020 bridal collection was one of the most exquisite collections of any type of this season and many more.

Such flamboyance was countered by more discreet displays that nevertheless packed a punch. Celine’s Hedi Slimane is one of fashion’s most controversial and divisive designers. For fall, he sent out models in what appeared to be exact replicas of Seventies French bourgeois chic. They looked both timely and unabashedly retro, addressing the ongoing questions of what exactly is fashion, is there a line between homage and replication, and if the mood is right, does it matter?

More obviously inventive, Loewe’s Jonathan Anderson continued to refine his artisanal approach while retaining an arresting urbanity. Adam Lippes focused on beautiful, interesting clothes for the customer he proudly identified as American and adult. And in a wacky approach to scaling back his decorative impulses, Gucci’s Alessandro Michele started in an insane asylum and ended up with some unsubtle nods to his far more minimalist predecessor, Tom Ford.

At a time when wokeness too often crosses over to annoying, some designers even got messaging right. Sacai’s Chitose Abe opened her show with one of the apparel world’s most familiar items, the trench coat, on which she sent a goodwill we-are-the-world message with an all-over world map print. Ditto Michael Kors, who in an emotional show on 9/11 (that youth choir — remarkable!), emblazoned classic his-and-hers pullovers, plain as could be, with a thought that charmed rather than chastised: a red line through the word “HATE.”

In fact, rethought classics were among some of fashion’s most provocative offerings last year, including in an art context. “White Shirts,” Rebecca Moses’ exhibit at the Ralph Pucci gallery last spring, focused on how a single item of clothing can speak to and reflect a diverse range of looks and personalities, much like Karl Lagerfeld’s 2012 book “The Little Black Jacket: Chanel’s Classic Revisited,” and corresponding exhibits, and much like Piccioli’s spring collection for Valentino, which opened with an in-depth study of the white shirt,  “one of the most universal pieces, and very common, in a way,” the designer said, explaining its vast appeal.

Sometimes, we saw invocations that challenged our perspective on a look, as happened with a couple of tuxedo sightings: Janelle Monáe, who came across as an unexpected but fully comfortable Ralph Lauren muse while writhing in song on the floor at the designer’s spring show, and Awkwafina, who looked cool-girl demure in Dior at Sunday night’s Golden Globes. And sometimes, we saw women revel in the joy of dressing and yes, undressing. At the Met Gala, Lady Gaga stripped down from Brandon Maxwell’s hot pink evening regalia to Forties’ fishnetted pin-up skivvies, her performance a masterful expression of creative camp with a subplot of fashion love. Then there’s jungle-printed J.Lo at Versace. Can you name a pop-culture moment of greater joy than seeing her, now famously and fabulously 50, mop the runway with the show’s teen- and twentysomething models, themselves no slouches in the glam category? Those moments were about two amazing, audacious women using high-impact clothes to make major, memorable statements about themselves. And they were fabulous — the women and the clothes. In the upcoming year, while we’re focusing on tech, sustainability, diversity, what’s next for retail and all of the industry’s other essential topics, let’s give a little love to the clothes. This is fashion, and in fashion, clothes must matter.