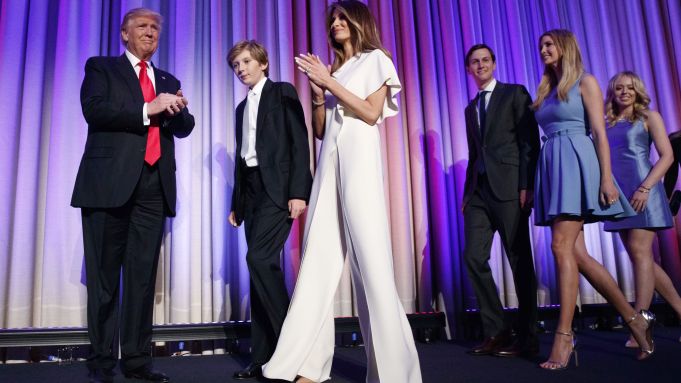 Ready or not, in 10 days the Trump presidency becomes a reality. And First Lady Melania Trump will have to get dressed. She finds herself in a situation unique among first ladies, with many designers staunchly opposed to dressing her on ideological grounds.

That hasn’t been an issue through the campaign and in the run-up to the inauguration as Trump has dressed off-the-rack and apparently full-price. Whether out of graciousness, pique or because it’s just not her style, in her rare public appearances she has avoided wearing clothes by those designers who’ve said openly that they don’t want to dress her.

In that group: Most dramatically, Sophie Theallet, who tried to spearhead an industry-wide campaign with an open letter to her designing colleagues imploring them not to dress Trump. Also in the “I’d rather not” group: Marc Jacobs, Phillip Lim and Derek Lam, to name a few. Among those responding in the affirmative: Tommy Hilfiger, Carolina Herrera and Thom Browne.

DVF, a passionate Hillary supporter, offered diplomatically that, “Melania deserves the respect of any first lady before her.”

The above designers deserve credit for going on the record. It should be noted that except for Theallet, most did so only when asked; it’s not a query people involved in selling stuff were jumping to field. As a journalist, I love a direct, honest answer to a tough question, but I get why numerous designers (at least among those I asked) declined to answer on the record. Whatever one’s answer, yea or nay, it’s likely to engender a good deal of outrage among those who think differently — roughly 50 percent of the buying population (give or take three million).

Even were the politics not loaded, Trump would have a hard act to follow. The Michelle Obama wardrobe fascination reached frenetic proportions, the result of a perfect storm of personality, physical presence and the cultural moment. Obama was unlike any first lady who preceded her, from the obvious — the first African-American woman in the role — to more nuanced, still significant matters. The Obama presidency spoke to the moment with its promise of hope and optimism at a time when social media, still a developing phenomenon, was quite literally giving everyone who wanted one a voice. The public became fascinated by Michelle Obama and fashion loved her. Obama used fashion to make statements, to connect people, to highlight young designers. Along the way, minus a mistake or two, she most often dazzled.

The differences between Obama and her successor in the White House couldn’t be more obvious. Melanie Trump is a stay-at-home wife and mother. While it’s tempting to cast her as a throwback in that regard, to do so would insult the many women who continue to work their tails off as stay-at-home moms, and who don’t consider themselves latter-day Mrs. Cleavers. Yet in one area, Trump has scoffed boldly at tradition — the political-wife arena, for the most part staying out of the limelight during the campaign, save for her convention speech with its mega “oops” moment.

Then there’s the glamour aspect. Whereas Obama’s innate modernity and specific good looks came to define a strong, unconventional kind of glamour, Trump is traditionally glamorous, according to just about any take on the word. Objectively beautiful with a model-type figure, some might consider her too polished, too perfect, too processed, but no one could question her glamour quotient.

Nor her fashion exposure. While Michelle Obama experimented boldly while deftly invoking fashion as a channel of communication, her fashion vision expanded after she became first lady, as she moved from narrow reliance on Chicago designer Maria Pinto to embrace a wide range of American designers, becoming a champion of small and emerging types. She also broke the deeply held tradition of Americans only wearing European designers fairly often. It’s a testament to the way in which she connected with people that, save for a few vocal critics (Oscar de la Renta for one), few seemed to mind.

By comparison, the White House won’t expand Trump’s fashion exposure or access. Her tony New York life has afforded every opportunity to explore and exploit the best fashion has to offer, and she has done so well. In fact, some designers who were delighted to dress private citizen Melania Trump are among those now hoping not to get the call.

Which is not to say that Trump’s style hasn’t evolved. One only need Google her 2005 wedding to the Vogue cover that accompanied it; for both she wore a Christian Dior dress by John Galliano that was as overstated as it gets, all ruched, bunched and medallioned under bulbous tulle veiling. Even then, it looked like a satire of trophy-wife regalia (2005 wasn’t 1988). More recently, Trump has toned down the flash considerably, opting for elegance over flamboyance. She now favors chic coats and relatively simple silhouettes, often with a feminine flourish — the voluminous sleeve on the white Roksanda dress she wore to the Republican Convention; the fluid drape on her election night Ralph Lauren jumpsuit; the now-infamous pussy bow blouse from Gucci worn with matching pants.

As for the litany of resources she’s known to wear, aside from Ralph Lauren and Michael Kors, she seems to favor Europeans, which circles back to what she’ll wear as first lady, particularly for next week’s inaugural events.
So far, Trump hasn’t had to rely on designer relationships for her clothes; she’s apparently content to buy at retail rather than have special pieces made for her. But clearly, she’s planning something unique for both the swearing-in ceremony of President Trump and that evening’s inaugural ball. Whom to call?

Many American designers don’t want to dress Trump, and some may have turned down her request to do so. Meanwhile, Michelle Obama openly broke the Americans-only taboo (albeit not for inaugural festivities). Given those realities — never mind her husband’s focus on Made in America — Trump may feel free, or forced, to look elsewhere, perhaps to designers of the European (read: haute) persuasion. Talk about fashion irony.