How does Michelle Obama get a pass on the ridiculousness surrounding her inaugural wardrobe selections? 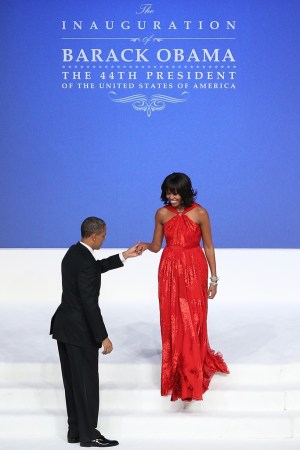 One can just imagine the countless sets of soulful, eager eyes. “Pick me! Pick me!” they surely cried out in longing. But in a moment — make that two moments, one morning, one evening — hope died, and all but a few went back to their under-known, under-loved status.

How does Michelle Obama get a pass on the ridiculousness surrounding her inaugural wardrobe selections? The whole thing would be merely silly and undignified if it weren’t so disrespectful of the time and resources of others, some of whom have little of both at their disposal.

The First Lady’s wardrobe has often captured the public fancy and that of the press as well (interest ebbs and flows depending upon the First Lady). WWD started covering White House fashion with the two Mrs. Wilsons (Woodrow Wilson’s first wife Ellen Axson Wilson died in 1914; he married Edith Bolling Wilson the following year).

We all know about the press vivisections of Jacqueline Kennedy and Nancy Reagan. Through the years, a great deal of attention has focused on event dressing, both of the inaugural and White House wedding variety.

“Breaking” the inaugural gown story — that of whom would do the dress — hasn’t always been a big deal, not due to lack of interest but because the “who” wasn’t always a state secret. Nancy Reagan — Galanos. Barbara Bush — Scaasi. Somehow, somewhere along the line, a playful guessing game took on a veil of secrecy that morphed into a lead wall. There was a considerable escalation surrounding Hillary Clinton’s inaugural choices. Still, WWD managed to spring a leak twice; first, by reporting on her Sarah Phillips gown six days in advance of the 1993 event and, in 1997, citing the actual exit number from Oscar de la Renta’s most recent runway show. Laura Bush didn’t seem to care. In 2001, her designer, Michael Faircloth, was accessible, serving up an illustration well in advance. Four years later, no sparks flew when WWD obtained and ran a sketch of her dress, this time by de la Renta, 10 days before the inauguration.

Michelle Mania has brought us to a whole other level of intrigue and control. Four years ago, many forces converged that cast the Obamas as a high-chic glamour couple. Fashion fell in love with Michelle and her arms. The speculation of whom she would wear to the inaugural activities was rampant. WWD jumped in. The concrete wall slammed down.

You know the story: Isabel Toledo by day, Jason Wu by night and suddenly, Michelle Obama was patron saint of fashion’s emerging and offbeat. Four years later, Thom Browne and Jason Wu, again. But before Thom and Jason, many designers submitted looks. WWD reported more than 15 did so; the rumors go as high as 30. Submissions included pieces created especially for Mrs. Obama and clothes from current collections.

The First Lady wanted to keep her looks secret until the big reveal, OK. The inauguration wasn’t a wedding, so as far as we know, no bad luck was involved in letting the news out. But fine. Her choice. Yet why the secrecy about the designer? Why not a simple, elegant statement from Mrs. Obama’s office in advance of the events? “Thom Browne and Jason Wu have designed Mrs. Obama’s inaugural outfits. Mrs. Obama has requested that they decline queries from the press.” Would Browne and Wu ignore that request? Probably not.

But let’s say Mrs. Obama enjoyed the public guessing game; she must, or it wouldn’t have happened. The rampant speculation should have been handled differently. First, how about having a prepared press person in play? WWD’s Rosemary Feitelberg was all over this story. Last week, she spoke to Semonti Stephens, deputy communications director for the First Lady, asking multiple specific questions about the process for determining Mrs. Obama’s inaugural wardrobe in front of a world. “I don’t mean to be difficult,” Stephens told her. “This is part of Mrs. Obama’s private life. We’re trying to help her [protect that.]” Really? Dancing on an enormous presidential seal at the Walter E. Washington Convention Center in front of a worldwide television audience is personal and private? And isn’t that dress destined to live in perpetuity at the National Archives? Does Mrs. Obama keep a hosiery drawer there?

From the human standpoint, clothes should not have been solicited from so many people. That’s right, not brands, firms or houses, but people. Sketches, fine. Conversations, fine. But to have had so many designers put effort, resources and emotion into making clothes is just not nice. And 15 or more designers? What woman in search of an event dress has a short list of 15 favorites?

Mrs. Obama isn’t an indulged starlet primping for the Oscars, nor should she behave like one. Women everywhere have big events for which they select a single dress in advance of the moment. Some of those women and some of those events are high-profile. (See: Kate Middleton; wedding to presumptive future king.)

That Mrs. Obama will likely wear the clothes procured as inaugural options in the future isn’t the point. None will have the impact of those she chose for Monday’s events, nor of the clothes she wore early during the President’s first term; such is the sartorial downside of incumbency. At the very least, with five minutes of attention she could have cut the list to a couple of finalists. As it was, Mrs. Obama’s fashion team needlessly disappointed and possibly misled many hard-working people, some of whom hoped vainly for a much-needed commercial boost.

For those still hanging in there, 2016 will be here before you know it.