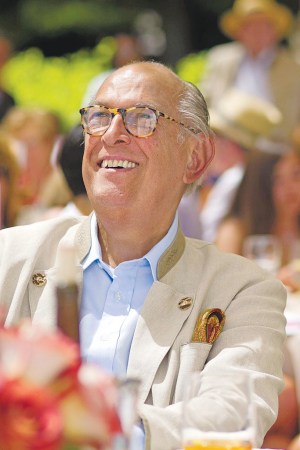 Several years ago, my daughter had a request. Three of her friends, all recent SCAD graduates working in New York, wanted to plan a fashion-centric, Make-a-Wish type visit to New York for the adolescent daughter of a beloved professor. Nikki Kaia Lee had been diagnosed with a recurrence of thyroid cancer and hers was a particularly difficult case, bizarrely resistant to treatment. I called a few people who were as expectedly fabulous as people in this industry tend to be in moments of need.

Except Oscar de la Renta. Oscar was beyond fabulous. “Of course! Bring Nikki up for lunch,” came his immediate response. “Oscar,” I answered, “I can’t be there — a family conflict.” I’m paraphrasing his next line, but not by much: “Who needs you?”

This story first appeared in the October 22, 2014 issue of WWD. Subscribe Today.

At the direction of its leader, the house of de la Renta rolled out the red carpet for a 14-year-old girl from Savannah and her mom. Lunch was served, the design studio, toured. Oscar discussed the role of the designer and the responsibility to inform a woman’s beauty. André Leon Talley dropped by. Nikki went home with presents — an Oscar de la Renta dress!! — and the promise of an internship, should such an engagement sound appealing.

I have numerous such recollections of Oscar. Outside the Queen Sofía Spanish Institute, of which he was chairman, his long conversation with Jorge, a wonderful Latin-American driver with whom I’d become friendly. His observation at an industry event that another designer had been less-than-gracious when brushing off well-wishers he didn’t recognize. His comment that during his considerable time on the treatment floors of Sloan Kettering, watching the pediatric patients broke his heart.

Conversely, a delightful turn at the boys’ school attended by Eliza and Alex Bolen’s three sons. Each year, some parents’ committee sponsors a conversation with a proverbial Big Name. The Bolens were hit up to deliver Oscar, and Alex asked me to interview him. After our conversation, the floor was opened to questions from the students — lower-school boys, 14 and under — and Oscar gave their questions (which were impressive) the same consideration he would those of an established journalist.

That was Oscar — friend and confidant to major luminaries of all sorts — heads of state, first ladies, socials, intellectuals, hometown clergy (read: the Dominican archbishop) and, more recently, various Hollywood types — but when you were with him, none was more important than you.

Innate goodness did not make Oscar a pushover. To a journalist he was a dream. In an increasingly bland-answer, flack-controlled world, Oscar was the rara avis willing to speak with and act on conviction. A firm believer in the second chance, he opened his design studio to post-scandal John Galliano, but ultimately removed him as possible successor out of loyalty to his own staff, some of whom Oscar thought John would want to replace.

The bravery revealed itself, too, when Oscar called out Michelle Obama for wearing Alexander McQueen to a 2011 state dinner with People’s Republic of China President Hu Jintao. “My understanding,” he told WWD at the time, “is that the visit was to promote American-Chinese trade — American products in China and Chinese products in America. Why do you wear European clothes?”

Oscar worked and charmed both sides of the political aisle. Though he rarely commented publicly on major social-cultural issues, when he did, he was characteristically direct, p.c.-ness be damned. “There is nothing worse than fanatics,” he said during a moving interview not long after the Sept. 11th attacks. “I am one of those immigrants who doesn’t believe in bilingual education. I think bilingual education isolates people.”

When warranted, Oscar’s opinions took a humorous turn. Hence, his summer-picnic repartee with Cathy Horyn following his spring 2013 collection. He took out a full-page ad in WWD, running an open letter to the then-New York Times critic, which posed the question, “If you have the right to call me a hot dog, do I not have the right to call you a 3-day old hamburger?” Fashion loved the exchange.

Yet Oscar’s hot-dog pique was genuine; he took exception to the implication inherent in the handle eminence gris. “I came to this country when women had a very different role than they have today…” he told WWD last year, in advance of receiving the CFDA’s Founder’s Award in Honor of Eleanor Lambert. “I have been a witness to so much.” He determined quite consciously to stay relevant through it all, at some point making a conscious decision to broaden his reach to generations younger than his traditional core. He succeeded brilliantly with steadfast adherence to a two-point belief system. First, that the purpose of fashion is to help women look beautiful. Secondly, that a designer cannot sit still. “The day I say, ‘I know it all, I should stop,’” he said. “I think one of the most important qualities in a human being is curiosity.” To that end, though “pleased and honored” to accept the Founder’s Award, Oscar told me that the award he wanted, the one that really mattered, was Designer of the Year. “I hate nostalgia,” he said. “Fashion is about now.”

The fact that the Designer of the Year accolade had eluded him for some time may have peeved Oscar, a fierce competitor and quiet modernist to the end. Yet that professional irritation aside, anyone who knew him at all must feel certain that when he passed away on Monday night in his beloved home in Connecticut, he did so in the most beautiful way possible — having loved every minute of a life lived beautifully, and fully at peace with the choices made along the way. “If I had to start my life all over and have nothing, I would not be extremely unhappy,” he told me during that 2001 conversation. “People and relationships are much more important.”

One must cast a vast net to encompass all of the lives Oscar has touched. As for Nikki, she is now 20, a healthy, beautiful and quite talented aspiring designer. A junior at SCAD, she has spent part of the last four summers interning in Oscar’s design studio.

I e-mailed her last night with the sad news of Oscar’s passing. “Oscar has always been, for me, the epitome of kindness and grace and compassion,” Nikki wrote back. “He taught me so much — about design, about beauty, about life and its wonders, but more importantly, how to be a genuinely kind, generous and loving soul. I am certain that he touched the life of every person he met. They say that legends never die, and so Oscar will live on, but today I am heartsick…and so grateful that I knew him. I will never be able to thank him, for his influence on my life.”