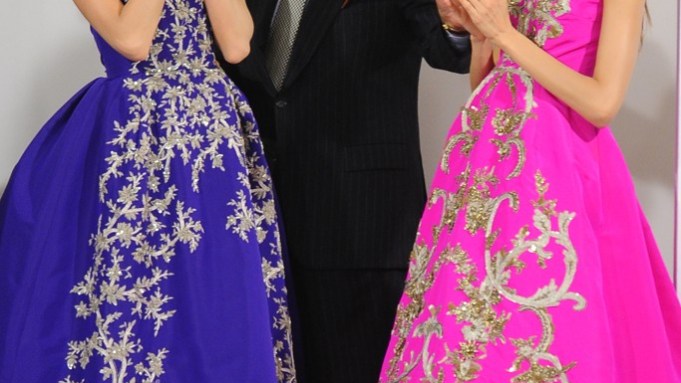 It’s hardly a news flash that Oscar de la Renta is suave, as suave as it gets. He is one of fashion’s most elegant purveyors, a highly respected emissary as at home among those reached by his philanthropic interests as in circles of power. And with members from Henry Kissinger to Hillary Clinton, who will present him with the CFDA’s Founders Award on Monday, those circles are powerful indeed.

Oscar stands as the elegant elder statesman of American fashion despite a fearlessness that flies in the face of pc practicality. Exhibit A: John Galliano. Exhibits B, C, D, etc: Any number of controversial industry positions he has vocalized over the years. Oscar puts on the record the kind of bold opinions that some will voice off the record, and others, to trusted intimates only. When we meet to discuss his upcoming award, he’s feeling particularly feisty. While “very pleased and very honored” to receive the Founders Award, he doesn’t quite understand what his “unique contribution” — the award’s explanatory description — has been, while noting that he’d rather be up for Women’s Wear Designer of the Year.

Unprompted by a question, Oscar also offers advice for the CFDA. While Diane von Furstenberg “has done an extraordinary, great job,” he thinks that the organization focuses too acutely on the glamour aspects of promoting young designers and businesses. “When I started in fashion, I became well known because I started to sell my clothes to the stores and people were buying the clothes and then it got the attention of [the press] and Women’s Wear Daily,” he says. “Today, there are a lot of designers who are famous before they have sold one single dress. I think that that’s wrong.” Yet he doesn’t deny the enormous obstacles today’s aspiring designers face. “I think today it is definitely much more difficult and more costly to start a new business,” he says. “At the same time, there are far more designers today than there have ever been.”

Oscar maintains as well that the CFDA should spend more time on core issues of import to American designers in global markets. His business is now two-thirds domestic and one-third international, the latter up “from one percent 10 years ago,” according to company ceo Alex Bolen. “The mission of the Council should evolve to help fashion not only [regarding what] they do artistically, but to really help promote American fashion outside of the United States,” Oscar says. “We are not as competitive as we could be because our tariffs are so high. We don’t produce fabrics in this country anymore. Why should there be such high tariffs today for imports? We’re paying double duty.”

No one knows better than Oscar that, like most organizations, the CFDA is in a constant state of evolution. He put in two stints as its president, from 1973 to 1976 and 1987 to 1989, and remained very involved in between. “When I was president 100 years ago, my assistant was the one making all of the telephone calls. We have changed a lot.”

One thing that has not changed: honoring the chic and famous as icons of style. Oscar relates with engaging detail the quest for a suitable successor to Katharine Hepburn, recipient of the Geoffrey Beene Lifetime Achievement Award in 1985. The desired honoree: Marlene Dietrich. Knowing that Alexander Liberman knew Dietrich, Oscar asked Condé Nast’s famed creative visionary to extend the offer. Liberman called the diva in Paris, where she lived across from the Plaza Athénée and arranged for Oscar to place a follow-up call. “She had that voice. There is no way that you can disguise that voice,” Oscar recalls. “I called her exactly at the time that Alex told me I should. I said, ‘May I speak to Miss Dietrich.’ And she answers back, ‘Miss Dietrich is today with the bankers in Switzerland. Would you call her tomorrow?’ It was her voice.”

Apparently, timing was everything. “She started drinking Champagne at 10 in the morning,” Oscar says. “She drank through the whole day, so you had to get her early.”

As scheduled, he called back. Dietrich answered the phone as herself, instigating a to-the-point volley:

“How much money are they going to give me?”

“Miss Dietrich, this is an honorary thing.”

“I’m sick and tired of honors.”

Ultimately, Dietrich accepted the award — with the strings of compensation, if not in a hard knot, then flapping in the breeze. At the time, Oscar notes, the CFDA had “zero money. Bill Blass and I put in $10,000 each to pay for her telephone bills because she said, ‘Can’t you send me some money for my telephone bills?’”

As it turned out, anteing up for Mamma Bell wasn’t enough to secure Dietrich’s transatlantic trek; she would not accept the award in person. The CFDA thus engaged Maximilian Schell, who had recently directed the excellent documentary “Marlene,” to accept on her behalf. “I don’t want him,” she informed Oscar. “He promised me a lot of money, and I didn’t get any money.” None other than Hepburn then stepped up. “I certainly don’t want her,” Dietrich insisted. “She’s only going to talk about herself.”

Frustrated, Oscar asked if anyone would pass muster. Dietrich’s desire: “I want Misha Baryshnikov.” Oscar asked, Baryshnikov agreed and the CFDA sent him to Paris to discuss his acceptance remarks with the lady herself. “He spent three days at the Plaza Athénée and he never saw her,” Oscar says. “Finally, he said, ‘I have to go back to New York, tell me what you want me to do.’ And she said, ‘You just go up on that stage, say thank you and get the hell out of there.’”

By then the Awards were well established, an immediate success when they were launched with some controversy in 1981, going head-to-head against the then-dominant Coty Awards. “Grace Mirabella hated me forever because Vogue was in control of the Coty Awards, and they were making all of the decisions,” Oscar says. “It was at the time when we all were getting into other areas of business, like fragrances. We felt that the synergies weren’t right and that we should be in control of it. Grace was very much against it. And then the following year they stopped the Coty Awards.”

These days, Oscar is less involved in the CFDA nitty-gritty. That hasn’t kept him from speaking his mind, whether admonishing Michelle Obama for wearing McQueen to a foreign trade dinner, calling out Peter Gelb for engaging a trio of European designers to costume Renée Fleming at the Met or hotdogging with Cathy Horyn.

Just as he has been privy to all and party to some of the inner snipings of fashion through the years, so, too, has he witnessed and participated in the monumental changes of fashion. “I came to this country when women had a very different role than they have today,” he says. “I remember when a woman walked into the restaurant in pants and she was not allowed in. I have been a witness to so much.”

He cites personal choice as among the most powerful advantages of modern fashion — and goes straight to the top for illustration. “It is interesting to see, for example, year after year after year, going to the same event like [the Costume Institute gala], why Anna Wintour wears only Chanel, she who is a great promoter of young designers. It’s a personal choice. Life today, fashion, is [about] personal choices. A lot of people thought that [the Met] should have been grunge, but she wasn’t grunge.”

Asked, for the purposes of this Founders Award chat, to come up with a time line of what he deems fashion’s biggest moments within his lifetime, Oscar scoffs: “I hate nostalgia. Fashion is about now. I hate to look back. You have to look a little bit back to look forward, but it’s a business where the past doesn’t count. You’re as good as your last collection. You can do 25 great collections and if the last one was a rotten collection — you’re going to be remembered for that rotten collection.”

As he sees it, it’s all part of his blessed life in fashion. “Fifty years I have been doing this and I think I started yesterday…to come to work every day is a huge, big privilege. And I may be totally wrong, but I think I am a much better designer today. Because I have a much better understanding of my consumer today than I had, say, 40 years ago.”

And because he’s not willing to cede an iota to younger generations of designers — a fact that keeps the de la Renta brand as relevant now as ever. “The day I say, ‘I know it all,’ I should stop,” Oscar says. “I think that one of the most important qualities in a human being is curiosity. And competitiveness is part of that curiosity.

“I am so overwhelmed that I still can come to work and be as passionate about what I do as Day One,” he continues. “That means a lot.”