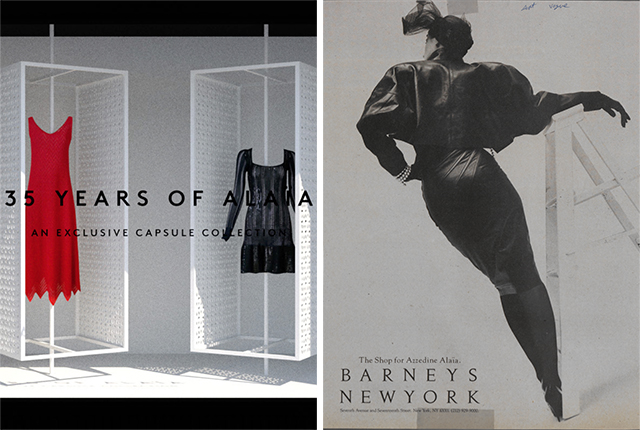 “You do not give Monsieur Alaïa parameters!”

So exclaimed Barneys New York chief executive officer Daniella Vitale, referring to the exclusive capsule collection Azzedine Alaïa designed for the store in celebration of his long and fruitful presence there — now 35 years and counting.

The collection consists of eight dresses, some inspired by — though not replicas of — looks sold at the store through the years. It debuts at all Barneys doors on Friday and will be heralded with windows at both New York locations — Madison Avenue and downtown — and the Wilshire Boulevard store in Beverly Hills, as well as with in-store “World of Alaïa” vignettes.

Vitale’s proclamation came in response to something of a rhetorical question: Did Alaïa have carte blanche or did you give him parameters? Yet the gusto with which she answered did more than just amuse. It spoke to the core of Alaïa’s long-term staying power, both at Barneys and in general. Alaïa is a genuine creator, famously uncompromising in his adherence to his specific, highly refined aesthetic and disinterested in diluting the message so as to appeal to a broader audience — a position he has maintained through his current partnership with Compagnie Financière Richemont, which obtained a stake in Alaïa’s company in 2007. While his my-way-or-the-highway approach has found critics as well as admirers, it definitely works for him. His acolytes, both within the industry and the women who wear his clothes, consider him a deity, in a class by himself.

The idea for the special Barneys collection percolated somewhat organically. Alaïa has literally been at Barneys five times longer than Vitale; she arrived at the store seven years ago, in the position of chief merchant/executive vice president, and succeeded Mark Lee as ceo in February. Neither side had the anniversary noted on a calendar. Rather, it came up in conversation. “Through a discussion, we realized that Monsieur Alaïa had been at Barneys New York for 35 years, and very few designers have had such a long and fruitful career at Barneys,” Vitale said. Thinking the milestone merited special attention, the retailer approached Alaïa to gauge his interest in “creating something special for us for the occasion.”

The store archives provided plenty of stimuli in a wealth of editorial and advertising images dating back to the early Eighties. “We collected them and presented to the Alaïa team,” Vitale said.  “So many of the pieces were timeless; therefore, it wasn’t difficult to draw inspiration from them.”

He was clearly into the idea. While the resulting collection wasn’t available for a preview, window renderings indicate considerable diversity within the tight lineup: dresses in black, white and red, some relatively fluid, others hyperconstructed. All pulse with the visual intensity of Alaïa’s hand, an intensity that reflects his target audience; Alaïa’s clothes personify womanly confidence and strength.

Conceptualized by creative director/senior vice president Matthew Mazzucca, the windows project an aura of serene power. The dresses pop out starkly from the white surroundings that draw on Alaïa’s signature petit fleur die-cut pattern. Mazzucca blew it up and used it as the installations’ primary design element, creating full-size vinyl screens for the outer windows on Madison Avenue. These flank the inner windows, each of which features two dresses in rotating petit-fleur cases. The downtown and Wilshire windows feature static variations on the motif.

“The mechanical turning of the forms [in the Madison Avenue windows] sitting in perforated petit fleur structures reveals the product from all angles and allows the customer to see the complexity of an Alaïa design,” Vitale noted.

That complexity underscores one of fashion’s most instantly recognizable identities: its essence as valid today as it was 35 years ago. “It is probably the only designer collection in the market now that is centered around these incredibly modern yet timeless silhouettes,” Vitale mused.

“[Alaïa] is not part of any ‘look’ or trend; he has genuinely stayed true to his aesthetic through and through,” she continued. Still, she noted that while adhering relentlessly to his hyperfocused ethos, Alaïa has also “been timely about evolving the collection to mirror the lifestyle of his customer.” She cited such design tweaks as slightly longer lengths, the introduction of seasonless fabric weights and serious investment in accessories and shoes, the latter areas on which he always focused, but to which, she acknowledged, the store didn’t initially give sufficient exposure.

Such progressions have proven successful in keeping the longtime Alaïa devotee engaged while, over the course of three-and-a-half decades, always attracting the young customer du jour, including everyone’s current obsession, the Millennial. “We are starting to attract first-time collectors of Alaïa, which is all the validation you need,” Vitale said.

Many such chic young arrivistes would probably classify as Alaïa groupies, and proudly so. It’s a club with which the ceo herself has flirted. Vitale recalled her first experience of the world of Alaïa. Shortly after arriving at Barneys, she was invited to the designer’s maison for one of his famed “family” dinners in his kitchen — a coveted invitation considered by fashion cognoscenti as a high honor. Vitale admitted to having been “a tad daunted” by the invitation, and what it represented relative to the long history between the designer and store. She arrived with then-women’s general merchandise manager (now chief merchandising officer) Jennifer Sunwoo and a box of fancy pastries from one of the swellest bakeries in Paris. “Meeting him and being in his private kitchen unnerved me a little,” Vitale recalled. So much so that when she handed him the box, she tilted it, smashing the delicacies within.

Alaïa reacted gracefully to the newcomer’s star-struck clumsy cookie move. “Fortunately, he has a wonderful sense of humor,” Vitale said. “[He] served them anyway and invited me back!”