Bridget Foley’s Diary: Behind the ‘Thread’ 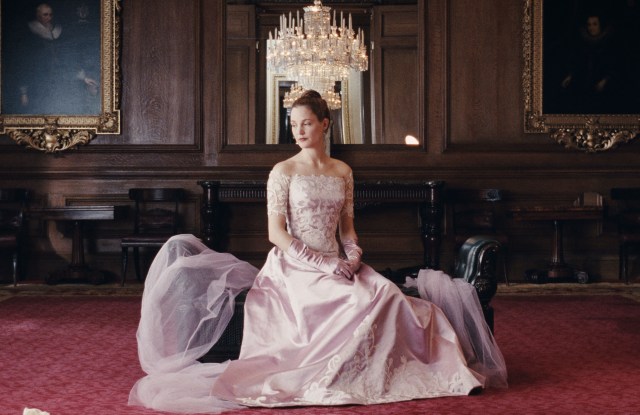 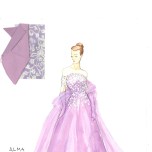 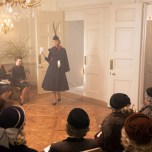 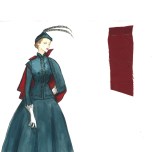 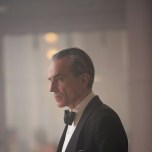 Contrary to early-fashion industry scuttlebutt, Paul Thomas Anderson’s “Phantom Thread” is not about Charles James. Nor is it about fashion, per se. Rather, “Phantom Thread” is about creative angst as a cover for personal unpleasantness. Protagonist Reynolds Woodcock is a genius in his own mind, despite little scripted indication of where exactly he fits in his industry’s hierarchy. Self-entitled to treat people badly — especially those women deemed disposable as their inspiration quotients wane — he believes that the demands of his craft justify, and even require, his arrogance and disdain. At least until he meets his match in Vicky Krieps’ determined Alma.

That craft, Fifties British couture, creates the aura for “Phantom Thread’s” strange exoticism within which familiarity and wonder simultaneously antagonize and coalesce. Anderson’s own uncredited cinematography beautifully depicts that world, realized in large part via the work of Mark Bridges. The Oscar-winning costume designer for “The Artist” and frequent Anderson collaborator created the overall aesthetic and individual fashion looks of the House of Woodcock, seat of power of Daniel Day-Lewis’ couturier and his behind-the-scenes sister Cyril, played by Lesley Manville in an austere, iron-maiden turn à la “Rebecca’s” Mrs. Danvers. Only Cyril’s not evil, just a tad creepy in her pragmatism.

The results intrigue. “I do like period [projects] a lot because I like creating those worlds, a world that is different from today,” Bridges says.

And so, he did. Rendered with exquisite literalism, the clothes could have stepped right out of a mid-Fifties film — or a real British couture house of the era. Until he signed on to the project, Bridges had little more than a casual interest in couture. He’d seen the 2014 “Charles James: Beyond Fashion” exhibit at the Met, and was fascinated by the constructions. “But,” he says, “as far as slavishly following [couture] — no.” Nor had he done a film in which fashion plays a central role beyond the usual character realization, noting, “My stuff is mostly character stuff or bad fashion, like ‘Boogie Nights.’ Not high fashion of a sort.”

Until now. To perfectly realize the overall essence and every nuance therein, Bridges engaged in intensive research, scouring the Victoria and Albert’s tome, “London Couture: British Luxury 1923-1975,” and the museum’s collection of couture. He runs off a litany of those designers he studied. Though he includes Cristóbal Balenciaga — whom Anderson discovered via Mary Blume’s biography, “The Master of Us All: Balenciaga, His Workrooms, His World,” becoming sufficiently intrigued to mull a fashion-focused film project — most of the list is of the Brit ilk: Hardy Amies, Victor Stiebel, John Cavanaugh, Norman Hartnell, and their 19th-century predecessor, Charles Frederick Worth. “I think it was immersing yourself in what was in vogue then, you know, the shapes…so you looked at everything you could,” Bridges says.

Unlike some costume designers who maintain that, for period films, they’re less concerned about historical exactness than achieving the desired effect, Bridges holds accuracy in high regard, a position strengthened through years of working with Anderson. “To be faithful to Paul’s work, I don’t play it fast and loose with the period,” he says. “I actually try to get it as specific to that period as possible, and then let’s just see where the chips fall. If you’re striving to get it 100 percent, in reality you’ll probably land about 90 percent. And that can be beautiful.”

The preparation proved part painstakingly planned, part organic, with Bridges involved in the script development from an early stage. He and Anderson studied and talked through the same visuals, “and I could distill that down. Then Daniel had opinions and ideas and had done research as he was building his character. That is part of it, too. So it was all incredibly organic and incredibly collaborative between the three of us. Daniel’s input was incredibly important because he had to be this person, you know?”

And Day-Lewis was this person, on screen and off. Renowned as a method actor, he engaged in the costuming process as Woodcock. The three men — director, star, costumer — first got together in New York seven months prior to shooting to discuss overall concepts and some such specifics, including the royal wedding gown Woodcock would design. A later meeting in London was all about Woodcock, what he would wear and how he would present himself. They “got a suit going” — Anderson & Sheppard, and custom shoes. “Being able to work that far ahead, at least on Reynolds, was helpful for us and helpful for Reynolds, for Daniel,” Bridges says.

Next on the agenda: Developing the House of Woodcock. The goal was to not only render the fashion faithfully, but also the essence of a Fifties London couture house, its structure and internal hierarchy, how it would have dealt with its clients, and not to confuse that with parallel Parisian processes. To that end, Anderson engaged British fashion veterans and V&A volunteers Joan Emily Brown and Sue Clarke (Brown had worked for Amies; Clarke taught fashion), who appear in the film as Nana and Biddy.

“We tried to be specific as to what was going on in London at that time,” Bridges explains. “So it was more about Hardy Amies and John Cavanaugh and Hartnell and what were they doing. How does Reynolds Woodcock fit into that world? How is he different? How is he the same?”

Essential to the process: determining the characteristics of the House of Woodcock. The three men decided on several codes — rich colors, ample lace, some historical references — the resulting aesthetic heavier that what would have been its Parisian parallel, a point Bridges kept in sharp focus while designing the film’s fashion show, a spring-season show, at Anderson’s insistence. “You’re talking about rich colors and a lot of lace. So Woodcock’s version of spring is a little heavy and a little dark, whereas, you go to France, it’s organdy, it’s floral, or something like that. That’s not English. There are woolens in a London spring collection,” Bridges says.

With the house’s creative parameters established, Bridges had to “do the business of making the clothes and sourcing the fabrics and deciding what [each look] should be; doing sketches for Cecile [Van Dijk, the cutter in charge,] so she could make them.”

All while considering the backstory for each dress, and whether it reasonably might have sprung from the creative mind of Woodcock. Case in point: Alma’s gown for Lady Baltimore’s party. Bridges thought the scene called for strapless but worried that Woodcock wouldn’t approve. (That’s Day-Lewis in Woodcock mode, for you fellow civilians out there.) Bridges recounts an exchange with Krieps during a fitting: “‘I don’t think Reynolds likes strapless. I’ve heard him say he thought it was vulgar.’ And she goes, ‘Well, I had a discussion with him the other day and we talked strapless.’ She said she asked Reynolds if he thought it was vulgar and he said, ‘Not on you!’”

Strapless it was! Asked if such exchanges are as odd in the moment as they sound to non-Methodists, Bridges offers, “No! No, no, not at all. It’s how I get clues on where to go.”

In another case, Alma, who is shown embroidering on several occasions in the film, wears a dress she designed herself. During a fitting for that look, Krieps suggested putting embroidery on the dress, and Bridges loved the idea. “We’re all collaborators. It’s really kind of wonderful and creative and exciting to do it that way,” he says.

Yet Bridges knows well that it’s not enough for a piece to merely look the character part; it must feel right to the actor. “The fittings are very intimate,” he says. “I have learned as a professional doing this for 30 years to really listen between the lines, to get my clues on what anybody is thinking, what their reaction is, how they feel. I can tell by the way someone moves as they walk in a shoe that it’s not going to work. Or I see [the actor] become the [character] with the right kind of bodice, because it feels right. Part of my job years is being a detective. A lot of times it will just be a seed of information that I can then build on. Or it’s outright, like Daniel as Reynolds, in Reynolds’ mind-set, choosing the color of a fabric. Then it’s like, great, ‘This is a beautiful color; we’re going make it in this.’”

For a royal commission, Woodcock designs a grand zibeline wedding gown, the bodice of which is cut away under the bust to reveal high-neck, form-fitting lace that’s both sensual and demure. It recalls the wedding regalia of a real royal bride of the era, married in Monaco. Intentional resemblance? “I think there is a whiff,” Bridges says. “It was in the zeitgeist at that time. So whether consciously or not, maybe Reynolds Woodcock influenced [Hollywood costumer] Helen Rose’s dress for Grace Kelly. I like to think that Reynolds came first.” (To that point, production notes list the film’s date as 1955 — the year before Kelly married Prince Rainier.)

Since all of the clothes attributed to the House of Woodcock were constructed and fitted as couture, none could be worked on before the casting was completed. Even Krieps arrived only shortly before shooting started. Thus Bridges and his staff made most of the clothes with filming in progress — a necessary if harrowing process, the success of which Bridges credits to Van Dijk and the costume crew.

“We were building the entire time,” he says. “Sometimes, out of respect for Reynolds, I would be, like, ‘Would you like to look at this book of satin samples to pick out which color for the antique lace dress?’ That kind of thing. There were some things that I just had to move on myself. But whenever possible, and it was a big story-point gown, it was a complete collaboration with Daniel as Reynolds making choices. It was pretty great.”

And high-intensity. As with a royal wedding gown that, even after a serious studio mishap, must make tomorrow morning’s crate to Belgium, in moving-making, the scene can’t hold because the dress isn’t ready. “They couldn’t wait for us, so we were absolutely working the whole time. We knew how much time we had by when the dress was scheduled to work,” Bridges says. “When you’re shooting a movie, it’s a moving train, and you’d better hold on.”