The elite designers, those who drive fashion, those few who will be remembered, do more than design to the bottom line. 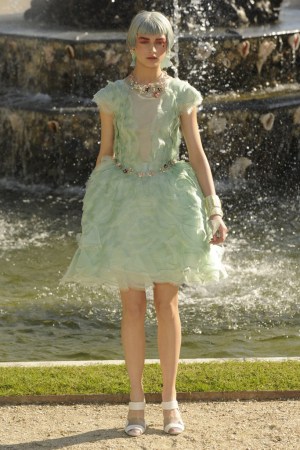 Schiaparelli? It’s not just the gal who looks a lot like Judy Davis and talks across the decades to Miuccia Prada at the Met, but an entity throwing a party during couture to celebrate the opening of its new headquarters. Never mind that it is not currently a business by any reasonable measure of the word. Rather, it is a trademark with possibilities, at least in the view of Diego Della Valle, one of the fashion industry’s great brand masters, who purchased it, hired a chief executive officer, rented office space and is on the hunt for a designer to help realize the house’s potential.

This story first appeared in the June 28, 2012 issue of WWD. Subscribe Today.

Make that the brand’s potential. Nobody talks about fashion houses/maisons anymore; in either language, the notion harkens to a quaint and ever-more-distant past, when a fashion house was presided over by a head, the first one typically its creative founder. Now houses have become brands administrated by ceo’s; some are parts of great luxury groups, brands unto themselves. Their operating principle (if not the price of their wares) is practically Marxist: The brand is supreme. The individual exists for the good of the brand.

From a business standpoint, true indeed. Just as it’s the evolutionary goal of a species to continue the species, it’s the evolutionary goal of a brand to continue the brand. Companies are intended to outlive their founders and flourish through generations. A primary duty of responsible leadership is to facilitate longevity, requiring a structure and philosophy that deem no one, top designer included, indispensable. Yet fashion — pure fashion, at least — follows a higher calling than mere bottom-line beauty. Stupid-sounding perhaps, but true. I’m not downplaying the importance of making money (it’s glorious; I’d love to make 10 times more than I do) or suggesting that designers as a genre are above concerns of the wallet. But the elite designers, those who drive fashion, those few who will be remembered, do more than design to the bottom line. At its best, their fashion codifies, or even instigates, something in the larger culture, often presenting alternatives to the status quo. At the same time, it speaks directly and with passion to the individual, offering one of the most intimate vehicles for self-expression, self-discovery, self-transformation. At times it awes with exceptional beauty, bravado or emotion. Not a job description all that many people can fill.

With the possible exception of jeans, dating to the 19th century (and here, the lore credits that industrious supplier to the gold-mining set, Levi Strauss), one is hard-pressed to identify a specific, seismic modern-era fashion occurrence for which a brand deserves more credit than the designer. Social movements trigger fashion looks again and again — Gibson Girl, flapper, bobby-soxer, beatnik, hippie — but megabrands, not so much. The New Look — created by Christian Dior, the man, not the brand. Le Smoking — Saint Laurent the man, not the brand. Grunge — Marc Jacobs, the man. (He didn’t invent grunge, but jumped on its fashion resonance. Perry Ellis the brand wasn’t smart enough to keep him employed.) Street-savvy minimalism — Helmut Lang, the man, whose company’s influence far exceeded its volume.

The past 15 years have seen riotous movement at the creative helms of fashion houses/brands. Every owner who has employed a designer to reinvent or take over a brand has been motivated, consciously or otherwise, by fashion’s most successful hire ever, that of Karl Lagerfeld by Chanel. In a piece on the dominance of brand over designer in WWD Collections Magazine in April, Lagerfeld told my colleague Miles Socha, “Chanel is Chanel. Fendi is Fendi. It’s my job to do the image of the companies and not go on an ego trip.”

True, and gracious of Karl to thus articulate. Yet Chanel’s strength of identity today — not to mention the wild bottom-line success — springs as much from Lagerfeld’s near 30-year stewardship of the house codes as the codes themselves; who knows where Chanel would place on fashion’s food chain had Alain Wertheimer made a different hire in 1983?

In Socha’s story, branding experts, talent-search executives and designers alike stressed the importance of a designer staying “true to brand,” implying that to do otherwise would devastate a business. That’s also true when the brand already matters, not only historically but within current business realities. Chanel must stay on brand as we know it, in part because Lagerfeld has so brilliantly nurtured the house codes. At Dior, staying on brand is essential, but means something very different than at Chanel. The Bar Jacket hasn’t traveled as well through time as Mademoiselle’s tweeds, and at his brilliant Dior height, John Galliano created incredible magic, but of a kind lean on workable day clothes.

In some high-profile instances, appointment of the right designer has triggered revival. The masterful Cristóbal Balenciaga makes the short list of all-time fashion greats. But leapfrog a half-century or so after his prime, and you found no consumer clamor for a redux of his long-dormant ready-to-wear. Thankfully, its owners had a keen eye for design talent. Balenciaga’s second act has flourished because Nicolas Ghesquière, an unknown 26-year-old when he presented his first runway collection, made it so. That Ghesquière incorporates precise archival references into his supremely modern work wouldn’t matter if his Balenciaga didn’t resonate so powerfully with the designer customer.

Lanvin — how many semi-knowledgeable fashion consumers could state one fact about Jeanne Lanvin, let alone identify a dress? Lanvin matters today because Alber Elbaz has created something wonderful for — as he loves to remind us — women of today; not because he takes some draping cues from a long-forgotten designer.

In the Nineties, with fashion mired in heroin-chic/deconstruction doldrums, along came Tom Ford. His “reinvention” of Gucci’s golden age of the Seventies was more marketing than reality; fashionwise, there wasn’t much to build on. One can argue correctly that the business has exploded further under the savvy stewardship of Frida Giannini; few would maintain the fashion impact has escalated similarly. Prada was a generations-old, staid family business. A genius granddaughter turned it into a directional mecca via explosive fashion rooted in insightful reading of the cultural moment.

More recently, the arrival of “the right” designer has had dramatic impact on established houses. Phoebe Philo has made Celine one of fashion’s driving forces. Riccardo Tisci might work a jockey cap or two into his lineups, but it’s hardly his celebration of the house iconography, which in popular perception doesn’t run much further than Audrey Hepburn in an LBD, that has thrust Givenchy into the forefront of inspirational (to consumers and other designers) houses.

“I work for Nina Ricci,” Peter Copping told Socha. “My personal aesthetic and taste lean very closely toward Nina Ricci, so it automatically makes for a good fit.”

At Alexander McQueen, the elevation of Sarah Burton has proven golden, so much so that PPR is now engaged in a level of brand expansion not attempted with Lee McQueen at the helm. To be honest, I read Samantha Conti’s WWD story last week a bit wistfully, happy for the extremely gifted and deserving Burton, for McQueen’s legacy and for the house, but sad that he is better known and more widely appreciated in death than in life. Despite her completely accidental ascent, Burton has proven herself perfect for the brand, fabulously talented (if less so than McQueen, a rare and real artist) and willing to actively translate the runway glory into the spoils of a workable business.

Hiring the right person for the job is the goal of every h.r. person with an open head count. At the highest creative level of fashion, that basic concept has somehow translated into the belief that, in this age of omni-channel branding, the message trumps all else, including the level of design. A frightening thought, and one debunked by plenty of recent evidence. Where might Halston be if 10 years ago Elbaz had been recruited there rather than by Shaw-Lan Wang at Lanvin? What if Ghesquière had risen through the ranks at Ungaro? What if 15 years ago, Bernard Arnault had hired someone other than Jacobs at Louis Vuitton? The house would surely be the cash cow it has always been, but perhaps not with the fashion profile it enjoys today.

There are multiple levels of success. We all know that bags, shoes and fragrance drive the business, a condition unlikely to change. And Godspeed. Again, fashion brands exist to make money. Not all fashion financiers, nor the executives they enlist to direct their brands, aspire to the higher calling of fashion. Fine there, too. Burberry seems to fit into that category. Early in his tenure, Christopher Bailey emerged as one of the drivers of fashion; more recently, his runway seems to have taken a backseat to larger branding efforts via social media, along the way downgrading Burberry as a directional fashion player but certainly not as a luxury brand.

Yet as Elbaz said poignantly during his resort presentation in New York recently, fashion cannot lose the aspirational element, the dream. In less than a week, Raf Simons’ debut for Dior will be history. The reviews will be in, social media will be swirling and the next chapter in the remarkable life of one of fashion’s greatest brands will have commenced. In the fall, we’ll get our first look at Hedi Slimane’s Yves Saint Laurent women’s collection. For anyone who loves fashion, the anticipation for both is intense not merely because each house boasts a new designer but because these particular designers telegraph the possibility of something great, something special.

At Schiaparelli, let’s hope whomever gets the job doesn’t feel that particular pressure too acutely. Other than those who have attended “Impossible Conversations” at the Met, only the truly fashion-obsessed care much about, or even know much about, Schiaparelli’s creative ethos. Were someone to emerge with the wit and deft touch to work those Surrealist motifs with modern ease — delightful. But a lobster sweater amuses once (maybe). Fashion that resonates with women on a daily basis has enduring appeal, whether from a megabrand such as Dior or a successful rebirth from dormancy, à la Balenciaga and Lanvin. Either way, the designer matters. A lot.