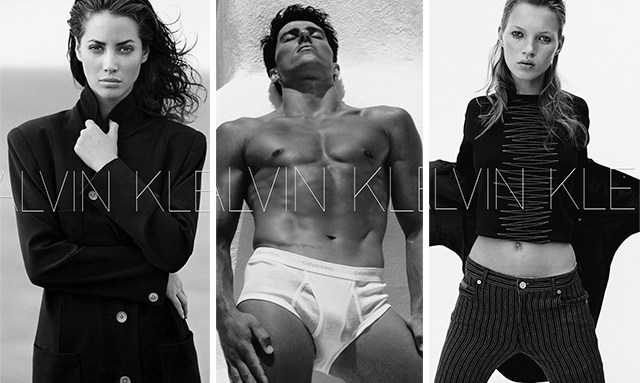 Fashion must be a part of its time. To gauge the zeitgeist and turn it into marketable, covetable items for which people are willing to spend is incredibly difficult, especially over the proverbial long haul, whatever that may be, usually, for an individual, a cross-generational span of decades. It requires luck and a healthy dose of audacity; the designer is, after all, telling the world that this is what you want.

Fashion longs to be ahead of its time, on the cusp of what’s next, a condition very few of its practitioners even approach, let alone master. To be ahead of one’s time is genuinely remarkable, requiring an almost psychic vision that projects into the future with merch and a message, along with an unwavering confidence in the validity of both. And it must face the ultimate test: Time. As with the stock market, only time will tell if you made the right call.

Time has proven Calvin Klein very right, almost eerily so. Minimalism. Sexual provocation. Marketing supremacy. Gender fluidity. Street. High-Low. Celebrity-fashion fusion. All hallmarks of fashion today, exercised with varying degrees of deftness by designers and brands across a broad spectrum of genres. In each case, Calvin Klein has been there and done that, so much so that he could be called the Godfather of Fashion Today, having coalesced those then-innovative, now-standard elements into a remarkable vision of modernity that still resonates powerfully nearly 50 years after he first (famously) pushed a rack of coats up Seventh Avenue toward Bonwit Teller, and 14 years into his retirement after he and his longtime business partner Barry Schwartz cashed out, selling Calvin Klein Ltd. to PVH, then Phillips-Van Heusen Corp.

For the intervening of thirtysomething years, Klein defined a fashion-driven lifestyle born of a fascinating fusion of danger and pragmatism. Even as he put the world’s most famous, most beautiful adolescent in Avedon-directed television spots and print spreads, telling with precious knowing of going commando beneath her Calvins, and later celebrated the joys of Obsession, he always turned out clothes that worked practically as well as viscerally.

In October, Rizzoli will publish the designer’s namesake “Calvin Klein,” a 420-page tome of self-reflection and evaluation, his first major self-reflective project since his retirement. Why now — who knows? When Klein retired, that was it. He didn’t continue on as a brand ambassador à la Valentino, or take on a smaller vanity project. He left the limelight, apparently to enjoy the spoils of decades of hard work. But then, Klein was never one for looking back; he loathed the concepts of anniversaries, so much so that in 2008 when WWD published a Milestone edition for the company’s 40th year in business, he declined to be interviewed. Nor is he quite ready to talk about this book now, his representative saying it’s too far in advance of the pub date.

It speaks plenty on its own, told in the designer’s own words, and primarily and fittingly, through images, most created in collaboration with a who’s who of great photographers: Bruce Weber, Richard Avedon, Steven Meisel, David Sims, Arthur Elgort among them. It was designed by Fabian Baron in the seductively minimal style that marked their previous collaboration and features three covers: Christy Turlington and Tom Hintnaus, both by Weber, and Kate Moss by Sims. All of Klein’s proceeds will benefit God’s Love We Deliver.

Yet the book is so much more, a fascinating, multitiered study of one man’s development into a major creative icon; the company he built; the culture he observed, spoke to and impacted as it transitioned from the waning innocence of the late Sixties through the social upheaval of the Seventies and into the major social recalibrations of the Nineties and Aughts, still reverberating today.

The volume is arranged in three sections: Rebellious, Minimalist and Stories. Rebellious focuses primarily, though not exclusively, on the advertising. “Not exclusively” an important point, because the first photo is from Vogue, Helmut Newton’s famous 1975 picture of Lisa Taylor. She’s sitting, the silk of her drawstring peasant dress dipping between her open legs. A man is partially obscured in the foreground. She wears bedroom slippers; he’s shirtless. You don’t see anything, no breasts, no crotch, yet the picture is incredibly provocative, projecting a young woman completely comfortable in her active sexuality.

This leads into a rich portfolio of imagery, much of it familiar, at least to those who follow fashion closely. Individually, the pictures are arresting and, within the sphere, diverse. There’s voluptuous sensuality and the waifish allure of the young Kate Moss. Taken as a body of work, it’s phenomenal that Klein was able to identify, play to and push the limits of the culture’s increasing sexual openness. To that point, early on he focused attention on varying gender roles, nearly 30 years ahead of fashion’s current obsession (no pun intended). Various images depict non-traditional pairings and sometimes, groupings (some, the nature of which is clear, and others, anything but). And there was the bottom-line angle: the unisex fragrance, CK One, launched in 1994.

Klein’s masterful marketing didn’t begin and end with how far he could push sexual provocation. One can only wonder how he would have handled messaging in this social media age. He stepped away from the business in 2003, the year before Mark Zuckerberg founded Facebook. Though less embedded in the public psyche than Brooke Shields and “Oh the smell of it” Obsession, a 1983 TV campaign was perhaps even more forward-thinking. It featured several young women, Andie MacDowell and Martha Plimpton among them, in individual commercials. In each case, the camera zoomed in as the protagonist spoke — MacDowell, charming Southern accent in full bloom, telling of her friends, trailer-park denizens Dot and Earl who have a dream to “someday see Atlanta;” Plimpton, a teenager about to go on a movie date, planning to take along a protective posse of four friends “just in case.” The camera only briefly cuts to close-ups of the jeans. In a sense, this campaign presaged the Influencer era, its ruse one of real people (albeit actresses) telling their stories, along the way making the jeans their own.

And of course, the clothes, under the Minimalist moniker. Ironically, Klein’s marketing genius has worked against his reputation as a creator of fashion. Because he so flagrantly reinvented what fashion advertising and marketing could be, how far it could go, what it might represent, his clothes, and their impact, have been underappreciated. Klein identified a lifestyle in need of a wardrobe. As the post-Mod Sixties rolled into the Seventies, he saw a generation of women whose newfound sense of freedom extended to the way they wanted to dress — style with ease, freed from intense constructions. He delivered that big time, rejecting anything that confined while stripping away the superfluous of decoration and the chichi of attitude. That’s not to say he never questioned himself; early in the decade, as the Eighties were on the cusp of exploding into hideousness, he experimented with couture influences, a direction offering insight into cut and fit. Yet the aura felt false and he soon dumped it. From that point forward, Klein remained remarkably consistent in his aesthetic but never static in its application. He designed au courant clothes that spoke to an increasingly fast-paced lifestyle, one in which sensuality could reveal itself beautifully in unfettered terms.

Klein’s rejection of the excesses of the Eighties positioned him perfectly at the vanguard of its ultimate antithesis, the minimalism that emerged in the Nineties. Credit for taking that movement into the mainstream often goes to Helmut Lang and Jil Sander, and deservedly so, each in his/her own way, brilliant. And to Miuccia Prada as well, though she has long since left her early austerity behind her. In fact, Calvin Klein got there first, a generation earlier.

The clothes in the book show sly diversity within a finely honed point of view. The opening slipdress, a famous Klein classic, precedes a host of tailored looks, T-shirt shapes; athletic and art-world inspirations, forays into color, even a voluptuous embroidered wrap that, in the photo at least, gives a nod to Poiret. Save for an expanded shoulder or two, many of the looks could be worn today without looking retro; they radiate currency.

A 2004 photo of Natalia Vodianova by Meisel shows her in a beige shirt, several buttons left open, tucked into a full, airy skirt, its volume draping between her spread-open legs. The visual references the Lisa Taylor photo, the two crystallizing the essence of Calvin Klein across a near 30-year bridge. To name the items worn — peasant dress, shirt and skirt — gives no clue as to their sensuality. A piece becomes sensual only in concert with the woman wearing it.

Klein’s point all along. “I didn’t set out thinking how to be controversial,” he told WWD in 1994. “Only how to make this woman look to-die-for, a killer — with no [obvious] effort. ” Mission accomplished, the proof in the book.

Calvin Klein Then & Now: A Look Back at the Brand’s Most Memorable Looks