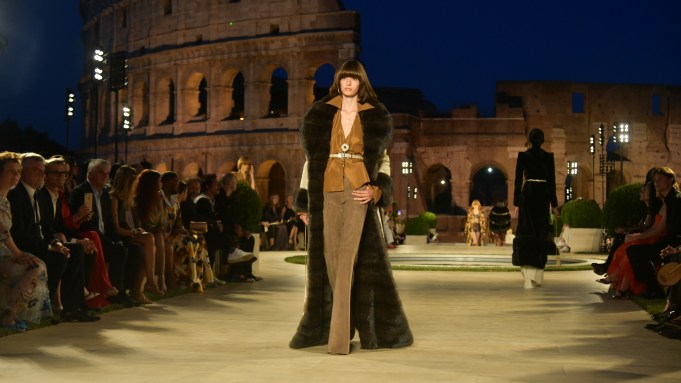 Haute couture is fashion’s most grand subgenre — the most extravagant, demonstrative, luxurious, sky’s-the-limit world in which all is possible. It’s also fashion’s most intimate arena, every dress built, every flower crafted, every embroidery executed first for the runway, and then for one individual client, by highly skilled artisans who take deep pride in and feel personal ownership of their work. That juxtaposition at the heart of couture felt in particularly high relief this season as, for whatever reasons, designers chose to manifest the intimacy in quite specific ways. It made for a strong and often poignant season.

There was no question that this fall season would feel different — the first one since forever without Karl Lagerfeld at the helm at Chanel. For as long as almost everyone in the audience has been attending couture, Lagerfeld’s Chanel was an essential anchor. For some of us, his show followed a revered ritual, the “Chanel preview,” during which Lagerfeld would multitask brilliantly, hosting and gossiping, offering iPad peeks at his set and deflecting collection-specific queries to Amanda Harlech while simultaneously conducting fittings, signing off on the final touches of each look — hat or no hat, the length of a glove, the model’s hand in or out of her pocket. This time, no preview, no Lagerfeld, leaving a dissonant void in that pre-haute Sunday evening.

Naturally, walking into this Chanel show felt different. Would Virginie Viard, Lagerfeld’s longtime right hand and now successor, continue the mega-set tradition now as engrained in the house vernacular as the camellia and double-Cs, or would she scale back? Viard chose the former route. Yet the vast circular library she had installed under the dome of the Grand Palais was more than a power statement; it drew an intimate line of connection from Gabrielle Chanel to Lagerfeld to herself, book lovers all.

To close the season, Fendi beckoned the fashion flock from Paris to Rome. Silvia Venturini Fendi showed the collection she now oversees solo in the Eternal City’s classical center, at the Temple of Venus against the breathtaking backdrop of the Colosseum. Majestic and awesome, definitely, yet somehow it, too, felt intimate. Backstage, Venturini Fendi explained why — Lagerfeld loved Rome, she said. “He always said, ‘Chanel is my French part; Fendi is my Italian part. Or it’s my Roman part.’ Because Italy is different. It’s divided.”

An epic changing of the guard for those two houses. But also, for couture itself. Following Lagerfeld’s death, Valentino’s Pierpaolo Piccioli has emerged as couture’s undisputed leader. He assumes that mantle on the strength of a series of incredible shows and his determination to make his couture not “modern” — that’s not a word he applies to the milieu — but relevant. His approach is a gentle one, to use the haute platform to express respect for all kinds of women — their different looks, ethnicities, attitudes, personalities. This season, he did so by incorporating nonspecific folk themes into his glorious lineup.

“The idea of haute couture [is about] individuality,” Piccioli said. “I want to express this idea of diversity as a value. Couture is the moment when you can express yourself in the most extravagant way, not to show off, but to get in touch with yourself, to cultivate yourself in a way that is strong.” He noted that “folk is about the idea of being very close to your identity.”

The personal grandeur resonated elsewhere. Giorgio Armani also applied folk principles at Armani Privé, although his renderings proved more arcane. But no matter; his shimmering, diaphanous pastel gowns looked like a dream. Giambattista Valli retained his signature ebullient femininity, but departed the runway in favor of a static presentation on mannequins. Yet for his look book he photographed the clothes on models posed among the naked mannequins, as if in a sweet, covert game of dress-up.

There’s nothing girlish to Clare Waight Keller’s approach to couture at Givenchy. But whereas in the past she has talked almost clinically about its precision and discipline, this time she spun a tale of an eccentric, “anarchic” woman rummaging through an old chateau and having her sartorial way with bed covers and curtains. “I like the idea that the chateau is not perfect, that there is something about it that needed to be torn apart,” Waight Keller said.

At Dior, Maria Grazia Chiuri commissioned the artist Penny Slinger to create a world of surrealist enchantment within the brand’s soon-to-be renovated Avenue Montaigne headquarters, a place where arriving guests could engage in their own private reveries before taking in Chiuri’s beautiful, dark collection, itself the result of her creative soul-searching. This time her starting point was Bernard Rudofsky’s 1947 essay “Are Clothes Modern?” which was printed in bold lettering on her first look out.

Iris Van Herpen feels passionately about the integration of fashion with technology, and here continued her exploration of movement, showing against a captivating sculpture-in-motion by artist Anthony Howe. It made for a mesmerizing take on future-now beauty.

Conversely, Viktor & Rolf’s Viktor Horsting and Rolf Snoeren sought to address the topic of sustainability in an earthy way. They turned to Dutch artist Claudy Jongstra for rugged, organic wool felt, which they used along with upcycled materials from their couture collections past, while keeping their silhouettes grand and their goal lofty: “To cast a positive spell that says things can be done,” Snoeren said.

These days, John Galliano’s work for Maison Margiela Artisanal isn’t obviously grand in the traditional sense. Yet the thought process is certainly complex, encompassing an expansive range of considerations sprung from Galliano’s ongoing commitment to self-examination and discovery. For fall, he continued his commitment to gender-neutral fashion in an intriguing, sometimes out-there study on just how far you push, deconstruct and reconstruct a pair of trousers. It was the third installment in his study of decadence, and it drew on elements he learned about trust when he did equine therapy in Arizona. Top of the list: Trust your instincts.

“Instinct is something I really want to talk about because it’s so natural, but so few of us remember how to rely on instinct,” Galliano said. “We’re so overwhelmed by the digital, by this tension between where we are as consumers and nature. Now I think instinct is kind of interesting.”