Much of fashion’s appeal as mass entertainment centers on the collections—once on the radar of almost no one other than participating insiders. 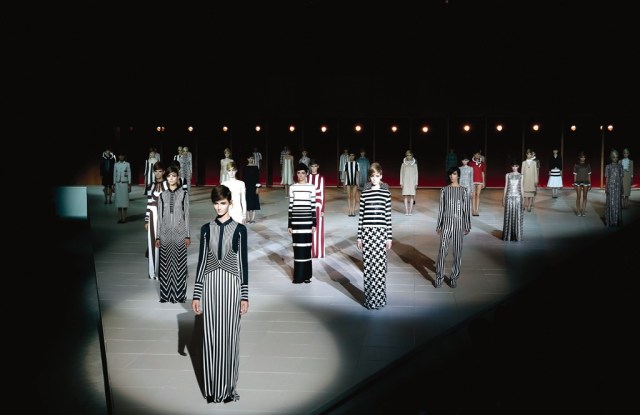 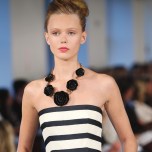 Fashion as spectator sport. No wonder the notion has achieved cliché status, given the multitiered gaping that goes on these days, fueled by the red carpet, the Project Runway effect, the endless paparazzi stalking of celebrities for publishable, post-able photos.

Much of fashion’s appeal as mass entertainment centers on the collections—once on the radar of almost no one other than participating insiders, but now a monthlong global media (both new and old) event. First came the celebrity takeover of the front row, and more recently, the social-media-celebrated external fashion show starring dressed-to-the-hilt editors stalked by a new genre of blogging paparazzi, many of whom themselves dress for the lenses of others.

Lest we forget, some of the actual runway fashion is also delivered with ample showmanship; we’ve come to expect no less from two creators in particular. This season, Marc Jacobs went Pop in New York with a high-drama treatise on the spectator black-and-white that he’s long loved but seldom restricted himself to. (Others were on the wavelength; black, white and graphic developed into one of spring’s most important trends.) At Louis Vuitton, Jacobs took the same visual bravado on a glossy ride to the Sunny Side via yellow-and-white graphics and a major set of escalators. At Chanel, Karl Lagerfeld’s installation of sleek, giant wind turbines provided a bold backdrop for clothes that, stripped of the obvious iconography, nonetheless radiated modernist Chanel. Increasingly, Alexander McQueen’s Sarah Burton has upped her production bravado to better reflect the theatricality of her clothes. This time, moody lighting and a mesmerizing video of bees at work telegraphed “a matriarchal society” in which everyone looked high-glam fabulous. Others, too, have shifted toward showmanship, notably Proenza Schouler’s Jack McCollough and Lazaro Hernandez, who inhabited a decrepit office building in the bowels of lower Manhattan for a dazzling technology-informed collection, and Alexander Wang, who punctuated his audacious, edgy lineup with glow-in-the-dark fun.

Still, the season’s biggest entertainment fest played out in the Battle of the Debuts. One hallowed fashion city, Paris. Two revered names, Dior and Saint Laurent. Two powerhouse groups, LVMH and PPR. Two designers deemed cooler than cool, Raf Simons and Hedi Slimane. Not surprisingly, the anticipation was inevitable. What could not have been predicted was the divide between critics and retailers on Slimane’s Saint Laurent. From this vantage point, Dior and Simons won hands down on the aesthetic plane, delivering what Dior has long needed—beautiful clothes that celebrate currency over camp. I found Saint Laurent oddly sweet in its reverence and mundane in its approachability. Yet I also saw how those two characteristics—and an oft-repeated riff on that good old rock ’n’ roll favorite: the leather jacket and skinny pants—could make a sound prescription for resuscitating the Saint Laurent brand around the world, a theory supported by the retail raves the collection garnered.

Slimane’s expected new prescription for women’s fashion never happened, but not because he failed; he didn’t even feign interest in breaking fashion news. This raises the question of whether the creation of real fashion remains a priority for major brands. Or, at a time of global aspiration, with shoes and bags driving the machine, is sartorial conservatism deemed more prudent? The abrupt departure of Nicolas Ghesquière from Balenciaga earlier this month, following one of his best collections—and one with an obviously commercial construct achieved without sacrificing his creative passions—added further fuel to the discussion that will inevitably play out in the seasons to come.

Similarly, we can expect the continuance of fashion-show vérité, that modern phenomenon in which we can all cast ourselves as the stars of our own mini dramas. Sobering though it may be to those of us trampled by street photographers in pursuit of far more glamorous subjects, this global dissemination of fashion—often at its purest and sometimes its most extreme—is ultimately good for the industry, indicating, as it does, that many designers have working thoughts more provocative than mermaid gowns.

The phenomenon has a disturbing side as well. Which brings me to The Slap, the now infamous contact between the hand of an enraged Jalou family member and the face of beloved publicist Lynn Tesoro. The incident occurred after the FDNY had its truncated way with front-row seating at Zac Posen. Weeks later, Tesoro made good on her promise to sue the family over the incident; in court papers she stated that Marie-José Susskind-Jalou, the president of the family publishing business, was the aggressor; the family maintains it was her daughter, Jennifer Eymere.

What’s going on? While it’s dangerous to project a single incident of aberrant behavior onto the body politic, this incident happened now for a reason; something about the zeitgeist (pardon the word) allowed it to happen. I’ve heard my dear friend Etta Froio speak about fashion frenzies in the Seventies, when the sight of an unexpected YSL color combination could make editors burst into tears, if not swoon. The moments were big, the personalities, bigger, the dramas, endless. But fisticuffs? No way. Even a few years ago, it would have been unthinkable. These are fashion shows, not Wild West saloons.

What appalled me even more than the act itself was Eymere’s articulated version when WWD’s Marc Karimzadeh called her for comment. Assuming the veracity of Lynn’s version (I know her; I trust her), Eymere for some reason decided to take one for her mother. Or did she? “It was just to humiliate her,” Eymere told Karimzadeh. “She humiliated my mom, and I humiliated her in front of her crew. Voilà.” She then added the erudite, “You don’t f–k with French people.” Eymere spoke not in the heat of the moment but hours after the fact, after plenty of time for rumination. Hers were the preplanned sound-bite words of someone perhaps welcoming her moment in the limelight, her wacky cameo in this still nascent genre of fashion-show vérité.

Thank God the best of the runway still trumps even the most bizarre sideshow. Case in point: Dries Van Noten’s stellar outing in which he transported grunge and punk into a glorious expression of chic sophistication. In it, he countered feminine with masculine, lavish with plain, gentle with aggressive. “The fact that we’re selling so well proves that people are open to a lot of different things,” Van Noten said. “I think now you can be dressed in so many different designs and so different many styles and still look very fashionable. And I think that’s the fun thing of fashion for the moment.”

So much more fun than a moron justifying a slap in the face.