The designer's company will discontinue the luxury Collection launched in 2003 to focus on Derek Lam 10 Crosby.

“It was kind of like, which child do you choose?”

Ultimately the answer came with clarity for Derek Lam and his business partner/chief executive officer and husband, Jan Hendrik-Schlottmann. The two confirmed to WWD that they are shuttering the Derek Lam Collection business to focus on the Derek Lam 10 Crosby contemporary brand that now accounts for 70 percent of their company’s overall business. Last week the men informed their major retail partners that the current pre-fall collection, which completed shipping this month, will be the label’s last, at least for the foreseeable future.

Lam said they were “putting the collection on hiatus,” but the move sounded definitive as he and Schlottmann discussed it, and their company’s redirected plans, over lunch at the Nomad Hotel last week.

Despite the designer’s “which child” characterization, the decision sounded less “Sophie’s Choice” than pragmatic business move, made not in emotionally wrought haste but after careful consideration over the past two or three years. It allows the partners to focus on the contemporary brand that has been on an upward growth trajectory. Lam noted, too, a bit wistfully, that from a creative standpoint, these days the contemporary arena is less fraught, more fun and allows for greater freedom.

Here, Derek Lam looks from both lines throughout the years.

“We had a challenging last three years with the changes and the uncertainty in the business and fashion in general. It became untenable to have two brands for us. 10 Crosby has been really growing, so that just makes the most logical sense,” Lam said.

Derek Lam Collection launched in 2003 and 10 Crosby in 2011, in line with a pattern embraced by many companies: Start at the luxury level and then reach out to a broader consumer base via contemporary. Yet that two-tier strategy has hit some bumps, including infrastructure expenses.

“For two collections to be successful, you need two full teams — design, product development, sales,” said Schlottmann. “It’s really easier to focus on one collection and pool all your resources and capital investment on one collection rather than two. And Derek Lam 10 Crosby is really, really doing well. At Derek Lam Collection, the growth has just been a little slower.”

The company, which employs 55 people, went through a round of layoffs in March, but Lam and Schlottmann don’t expect additional staff cutbacks ahead. Something else that won’t change: the price structure of the 10 Crosby business. The average price point for Derek Lam is $1,400 and for 10 Crosby, $350, which the partners intend to maintain. The post-Collection 10 Crosby, Schlottmann said, “is not going to be an amalgam of two collections.” The 10 Crosby capsule called “Essentials,” which is as it sounds, with an emphasis on pants, will continue. 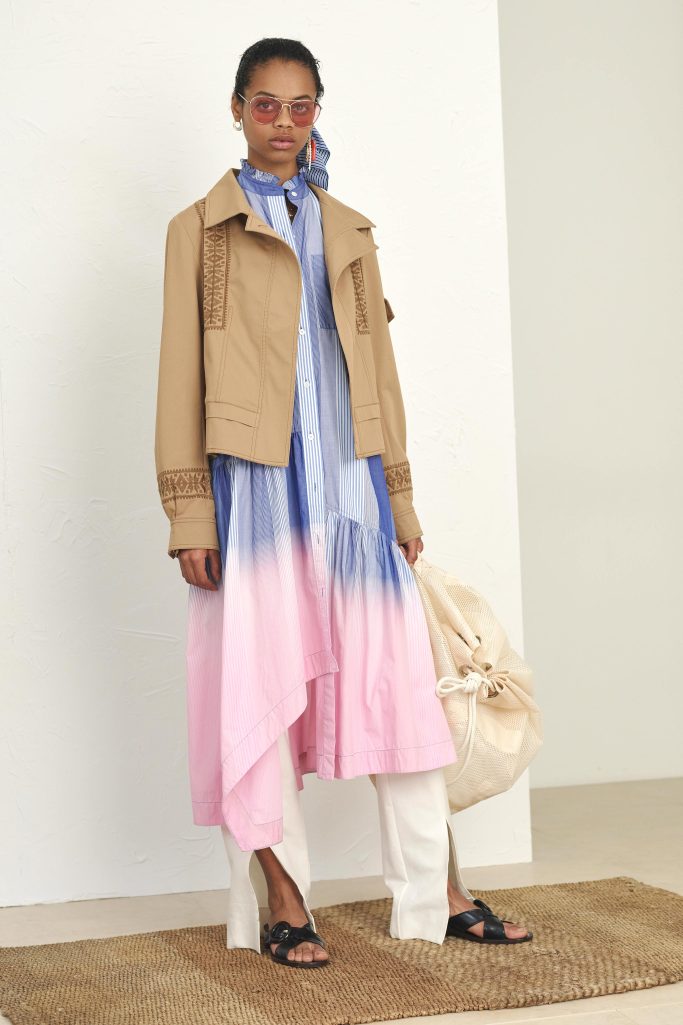 Lam called contemporary “its own animal,” and stressed the importance of holding firm on current pricing in order to be a “key anchor” in that area. “You have to just kind of conform with, A, what the customer wants, and what is the purpose of contemporary. To try to design it differently, or make it more Collection but at better price, it just doesn’t make sense.”

Asked how he approaches those two points, what the customer wants and the purpose of contemporary, Lam responded that“contemporary is just a lot more fun. You are allowed to be more playful; people are looking for just less serious. The clients in contemporary are looking for more immediate gratification, and, it’s a faster turnover. There really is a need for like 10 to 12 deliveries a year.”

The move comes after much soul-searching and pragmatic analysis. Over the past several years, the 10 Crosby business has expanded from 60 percent of overall revenue to 70 percent, according to Schlottmann. For a midsized, ready-to-wear-dependent company like Lam, competing at the luxury level is extremely difficult in a world dominated by the major luxury groups with their endless resources and global reach.

“You use the same fabric, you use the same factories. We can’t ask for the same margins otherwise we wouldn’t be competitive,” said Schlottmann. “And we don’t have income from accessories or cosmetics which finance that project.

“I think from a business perspective, you do a collection product and you compete with big companies who can spend millions of dollars and just play around because it’s a marketing tool,” he continued. “It’s a different situation when you actually need to make a profit with this product.”

In the early Aughts, American fashion was in the throes of a golden moment, fueled in part by the global fascination with the generation of younger designers coming up after Lam that gave a halo to the whole industry here. The financial crisis hit the foundations of that burgeoning American fashion moment while exposing the tenuous realities of hype-fueled success. At the same time, the impact of then-nascent e-commerce was starting to be felt. Yet the Derek Lam business endured. “To be honest, I think the can was just kicked down the road,” Lam said. “I think we were so down that there was almost this natural [inclination] to think it has to go back up. But I think systemically [things changed]. And then, consumer response to product has changed so much. It’s chaotic.”

Exacerbating matters, the megabrands flexed their muscles in a very specific way, according to Schlottmann. In the lead-up to the financial crisis, the Derek Lam business was 50 percent international. It’s now next to nothing. “After the financial crisis, all the big brands forced the independent retailers to buy their ready-to-wear if they wanted their bags and shoes.…That’s what retailers told us,” he said, noting that meant a significant hit to the Derek Lam business between 2008 and 2010. “That’s what it means, competing with these big brands. 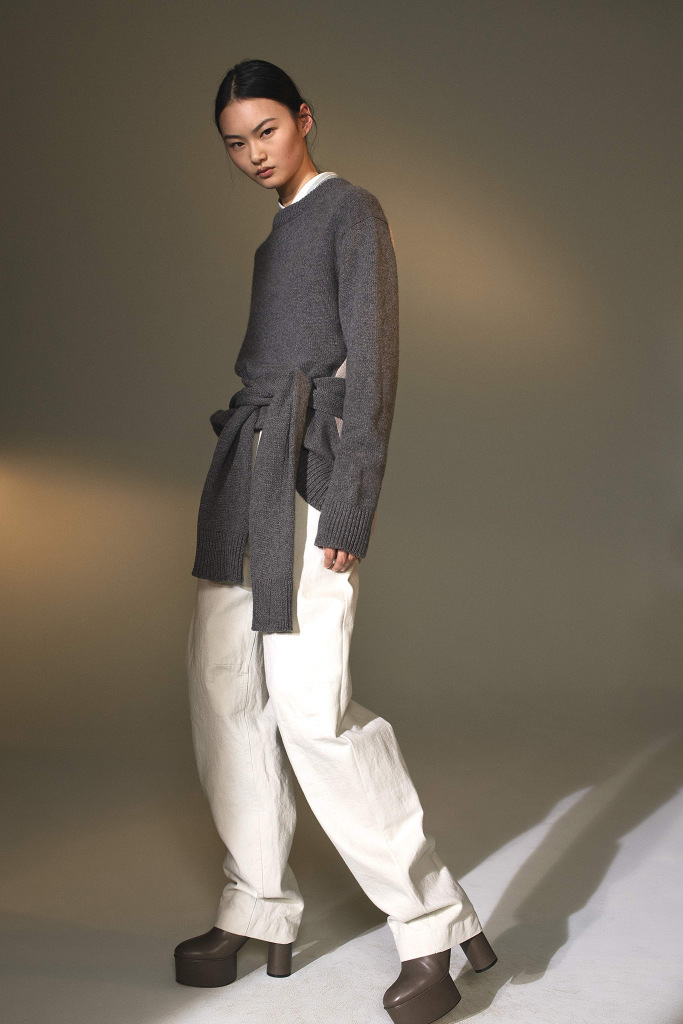 “I think we were maybe a little naïve to think that we could all compete at the same level, the same playing field,” he continued. “I think the lesson is to pick your lane. You pick your home market, and you grow there first before you go back outside. I still believe that Derek Lam has a huge opportunity in China, and that will be the next step.”

Yet Lam acknowledged that more than economic forces have been in play. His approach to luxury fashion has always been about discretion and elegance, and he’s no longer sure of its validity in a landscape in which norms of daywear have been upended. Traditional American fashion long took a bifurcated view, “what you wear in your professional life, and what you wear off-duty.” However, Lam said, now, “if you want to wear something that’s feathered and logoed and beaded, there’s no one stopping you, the designer customer, from wearing that during the day. Or they want to wear sweats with a logo. So this less traditional way of what does it mean to be dressed — the rules are just broken.”

While Lam appreciates the spirit of night-for-day flamboyance, he’s no fan of the second half of that equation, the logoed sweats. “I’m actually very demoralized. I’m like, ‘Why didn’t you make an effort?’ I mean, it’s part of the enjoyment of life, I think. Daywear, at a designer level, traditional daywear — no one cares about it anymore.”

Lam’s conversation turned philosophical, about developing and refining one’s personal style and what it means to get dressed, and even the moral codes inherent in doing so. Clearly, he has pondered the “why’s” of fashion. There was a time, he noted, when women took a very considered approach, and buying clothes involved more than an isolated series of individual eye-catching purchases. Then, for women who saw the development of personal style as an outward-facing signage of their deeper selves, there was “a trajectory to their aesthetic choices. I’m not saying it’s good or bad. It just doesn’t exist anymore….There’s less planning about, ‘OK, I’m defining my style,’” he said.

“Don’t they change their style constantly?” Lam queried. “I’m talking about someone who looks at their whole aesthetic choices in life. There used to be like, ‘this is the kind of woman I am, this is the kind of woman I want to become.’ And it permeates through every part of her life, whether it’s going to work, or a special occasion, or traveling. Now that’s less important to people. I think style is less important.”

Lam built his luxury business and refined his aesthetic based on core codes of simplicity, modesty and “not being flashy,” which he considers traditional American lifestyle concepts that have faded with time. He recalled the era of “The Age of Innocence,” when refined women kept their new clothes for several seasons before wearing them, lest they appeared too flashy. “It was a sense of restraint that I love. I love those aesthetic choices,” he said. “It’s really about being elegant, and I think with that, it comes to moral choices — why you choose to wear something, why you choose to live a certain way.”

As for fast fashion — he’s not a fan. He and Schlottmann recently moved to Hudson Yards, and they love it. Living near a mall, Lam mused, gets a bad rap. For his purposes, it’s educational.

Not so the contemporary arena, which offers fashion that is still considered and well-made, yet within a completely different construct that luxury. There, Lam feels comfortable digressing from his strict luxury codes, to express himself with greater flamboyance and whimsy. “I’m less burdened when I’m working with 10 Crosby,” he said. “I feel freer as a creative person, and as a creative person within a group of people. I’m not defined by, ‘what do I need?’ I’m more of a conduit with a group of people, whether it’s the designers or the business side of it, merchandisers, the production team. It’s like working a different part of the brain, a different muscle.”

And while with Collection, he has been stalwartly trend-averse, at Derek Lam 10 Crosby, bring it on.  ‘I’m thinking about ‘OK, this is something that’s trending. Where does this trend go, and how do I answer that?’”

As Lam and Schlottmann turn their efforts solely on contemporary, they’ll continue to work with their major retail partners — Saks Fifth Avenue, Farfetch, Neiman Marcus, Barneys New York, Bergdorf Goodman, Net-a-porter — all of which have carried both labels. Schlottmann calls the companies domestic distribution “the best” and said in his conversations with retailers about discontinuing Collection, they were fully supportive and in some cases, sad. “Many of the retailers wear our clothes,” he said.

Now, the focus is on developing an independent U.S. store base and rebuilding international. The company’s strongest foreign markets are Canada and South Korea. In China, where Lam is well-known despite low retail exposure, the primary presence is via Farfetch’s Chinese-language web site. Schlottmann and Lam see huge potential there, and are building awareness by dressing celebrities and influencers — many of whom have gravitated toward 10 Crosby all along. “It’s more out there” than Collection, Lam said.

And “more out there” at a contemporary price point is what Lam and Schlottmann believe the market wants, and to which they will now give their full attention — or almost full attention. Lam left the door open, just slightly, for a return to a luxury or some variation thereof, at some point. Putting Collection “on hiatus,” he said, “will maybe give me some time to think about what is the next permutation, what it means, while we’re still working on something that is really growing and trending. Everybody’s excited about what we’re doing at Derek Lam 10 Crosby, so we’re going from there.”