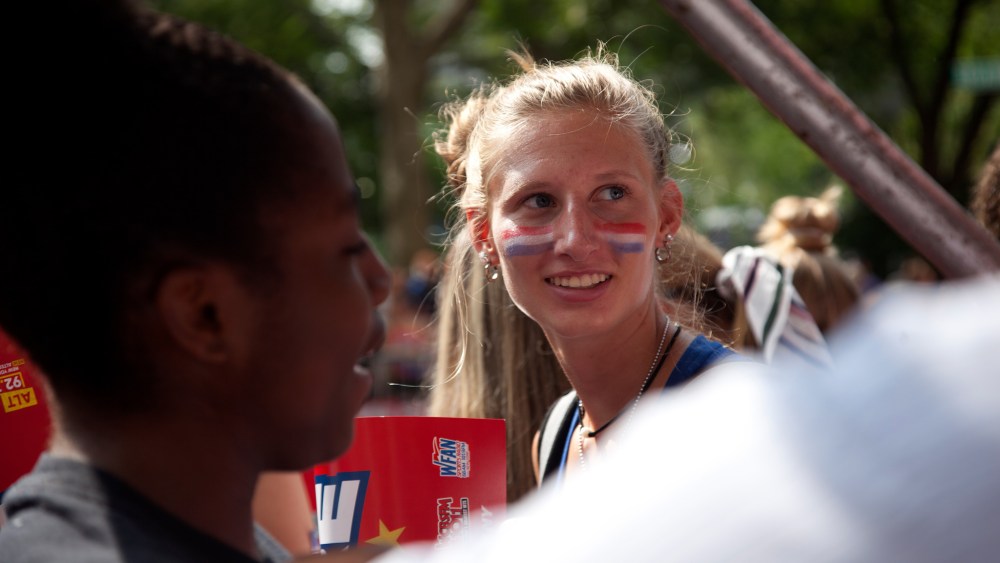 Soccer and navigating a dense crowd in nasty heat — not two of my favorite things. A crowd in the heat because it’s a crowd in the heat. Soccer, because I can’t quite grasp the game, and I’m perplexed by a clock that starts at zero and runs upward to some random number past 90 minutes. I believe in God and a game clock that counts backward to zero.

Yet I really wanted to attend the parade for the U.S. World Cup champion women’s team on Wednesday morning, at this seminal cultural moment for women and girls. In the United States, it’s a moment of awakening and possibility represented so powerfully by the confidence and swagger of this don’t-f-with-us team. It’s also a moment of constant reminders — Jeffrey Epstein — that for women and girls, genuine equality, and not just of pay, is still woeful ahead of us.

This USNWT has smitten the country, the world even, its members using their suddenly acquired national profiles to make an impact beyond the world of sports. Several colleagues and I headed to Gotham’s honorific parade epicenter, the Canyon of Heroes, to see who would show up and how this team and its power run toward greatness has resonated with them.

Even for someone operating from a baseline of skepticism about celebrities as role models, the experience proved moving. The crowd was largely female and drew heavily from the middle-school-through-college soccer-playing demographic. This event meant something to these girls and young women; the athletes riding past on floats meant something to them, representing both possibility and progress. In a sports world in which men get the lion’s share of the glory, these women were, at this moment, the biggest sports stars on the planet, without qualification by gender. Of the young women I approached randomly, all of them either play or had played soccer, and the U.S. team’s success born of dedication, focus and hard work spoke to them.

One quartet of 2019 high school graduates left Philadelphia predawn on the bus to arrive in time. “We wanted to come to show our support for a team that we absolutely love,” said Sydney Zimmerman. The World Cup win, noted Andrea Pezick, “means a lot because no one expects women to be as good as the men.…And they’re better than the men.” Kerstin Axe found the whole atmosphere uplifting, “a good environment to be in.” Cameron Gabula quit soccer a while back, but came to celebrate the team.

Another soccer-playing group came from Marlborough, Mass. “They’ve been our role models. We all play soccer together,” said Krista Hudzikiewizz. Madelyn Seder noted that watching the team play has been instructional as well as inspirational, and that “we’ve been learning more about the game, and loving it.”  “We just really love this national team, so we came to show our support,” said Alicia Bibi.

Not everyone was a current scholastic-age player. For Deb, who declined to give her last name, the progress the team represents stirred emotions. She played soccer through college, and was on the University of Stonybrook’s first women’s Division 1 team, in 1989. “The only reason they stepped us up was because men’s lacrosse was going to Division 1, and according to Title IX, when you graduate a men’s team you have to graduate a women’s team.

“Honestly what these women stand for, for equality and what they’ve done, it’s just incredible,” she continued. “And the fact that they have women that are coming out as gay and playing on a public stage is inspiring. I have two daughters that play, nine and 11, so for them this is a great step in the right direction.”

On the man front, the presence of dads was encouraging. Lou Bibi, Alicia’s father, loves that his daughter loves soccer, but he was also just grateful for the time with her. “It’s the event of a lifetime” to share with his daughter, a rising high school senior, he said. “Usually after graduation, kids move on, so this to me is very special.”

Esther, 19, and Deborah, 13, came in from Teaneck, N.J., with their father and sometimes soccer coach. “This is inspiring to me, being a woman and seeing this accomplishment,” Esther said. “It inspires me that women can go further in society. A lot of people mainly focus on men’s teams, so it’s good they give this attention to women. Events like this show other American women that they can do the same thing. It also advocates for equal pay, which a lot of people talk about.”

Equal pay — that issue was as front-of-mind to the women and girls I spoke with as the World Cup win itself. Signs calling for change peppered the scene, and everyone seemed to share the opinion that between women and men, the better-by-far-players shouldn’t have the lesser paychecks.

Tiesha Mayfield plays forward for SUNY Delhi. Asked about the lack of pay parity, she launched into an impressive series of statistics compiled for a class project she did on the gap, the size of which came as a “a big shock.” “Now is the moment [to correct it], as long as fans keep it in the media and keep Google searching it. That applies the pressure,” she said.

Mayfield has followed the national team for years, and is particularly inspired by Crystal Dunn. “I’ve finally seen somebody of my skin color play a sport,” she said. “It means a lot in certain sports, if you’re not playing  basketball. When I first saw her, it made me want to play.” Mayfield brought her first pair of cleats, purchased when she was 13, hoping for a meet-greet-and-sign-the-cleats moment with Dunn.

Awareness of the pay gap starts early. Alice Farmer, 11, at the parade with her family while on vacation, brandished a sign demanding “Equal Pay.” “Girls should get just as much money as boys if they’re winning just as many games. And they’re winning more games,” she said. Alice knows a thing or two about teams that win big; she wore a New England Patriot’s cap. When I told her (nicely) that I didn’t like it, she didn’t skip a beat. “Thanks,” she said. “I get that a lot.”

The event was one of positivity and empowerment. And while sports are not a panacea for girls — the tragedy of the U.S. gymnastics program made that abundantly clear — those I spoke to made a fabulous argument for empowerment that girls and women can derive from playing sports. Those I spoke to were smart, articulate and seemed ready to tackle the world’s challenges.

Surely, there are many, including those impacting women and girls directly. Earlier, in a “Today” show interview with Savannah Guthrie, a young woman, Jennifer Araoz, told of her harrowing “alleged” rape at the age of 15 by Epstein, the man who has hobnobbed with countless of the rich and famous, including two U.S. presidents, one past, one present, and who managed to secure a ridiculous sweetheart deal when charged with sex offenses with minors in 2008. He’s only now about to get his comeuppance (let’s hope).

Women have made a great deal of progress, and this U.S. national team is a bold, shining example of how far we and the culture have come. There’s still a long way to go.

They are Celebrating: Photos from the Women’s World Cup Parade in NYC