As the nation reels from the recent mass shootings, Walmart and Amazon continue to play to the gun-culture constituency with inflammatory merch.

A shirt featured on Amazon.

That flagrant message on a T-shirt, combining gun-nut gusto with blatant misogyny, can be yours for $13.75 and an online click. Not on some arcane fringe web site, but on one with which you may be familiar: Amazon. 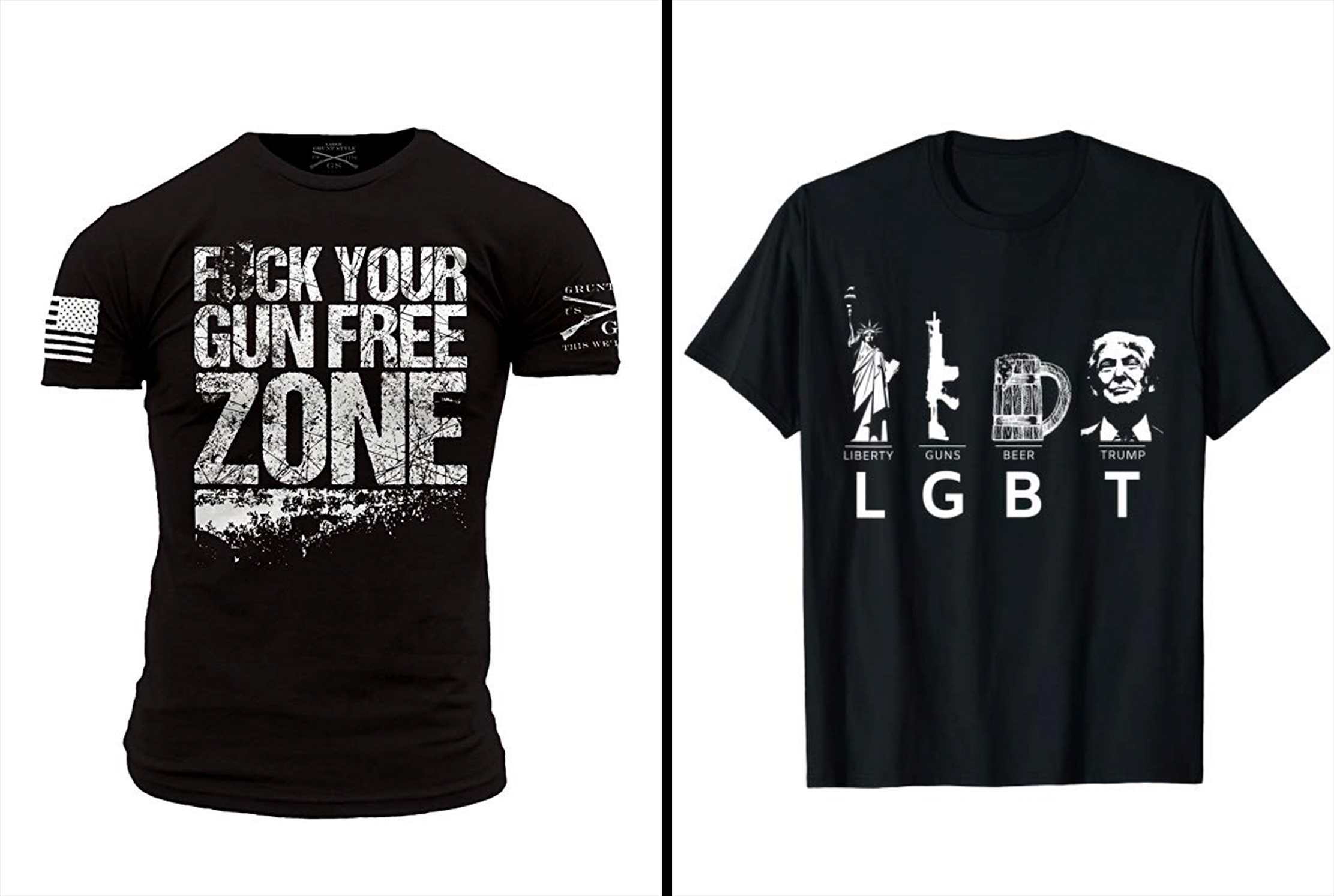 Plenty more versions of similar sentiment are available at one of the world’s largest retail marketplaces, some that ship from Merch by Amazon and some from third-party sellers with all-in-good-fun names like Comical Shirt and Feelin Good Tees. Walmart, too, offers a bounty of shirts celebrating gun culture.

Several perusals of both retailers’ web sites indicated a vast assortment, with tones registering from sophomoric to vitriolic. With a couple of exceptions, these searches showed Walmart’s shirts to focus narrowly — Second Amendment, yay! Gun control, nay! — without overtly disparaging specific groups or localities. Two notable exceptions: One shirt that spells out “Detroit” in the shape of a gun, and another that reads: “Homeland Security” above a photo of four armed men who appear to be Native American, captioned with: “Fighting Terrorism Since 1492.” These all run under a marigold banner referencing Saturday’s horrific shooting at the El Paso Walmart that left 22 people dead. It reads, “’When the worst happens, we counter with our best.’ Read Walmart CEO Doug McMillon’s letter.” McMillon writes that, in the midst of “shock, anger, grief,” the Walmart organization “will work to understand the many important issues that arise from El Paso and Southaven, as well as those that have been raised in the broader national discussion around gun violence. We will be thoughtful and deliberate in our responses, and we will act in a way that reflects the best values and ideals of our company.”

Amazon boasts a more diverse selection of pro-gun shirts than Walmart, with options that incorporate, along with misogyny, motifs including anti-immigrant musings and what appears to be disdain for the LGBTQ community, given the co-opting of the letters LGBT for a multitude of styles. The first three letters stand for Liberty, Guns and Beer, and the T, most often for Trump (although Texas and Tits are other options). 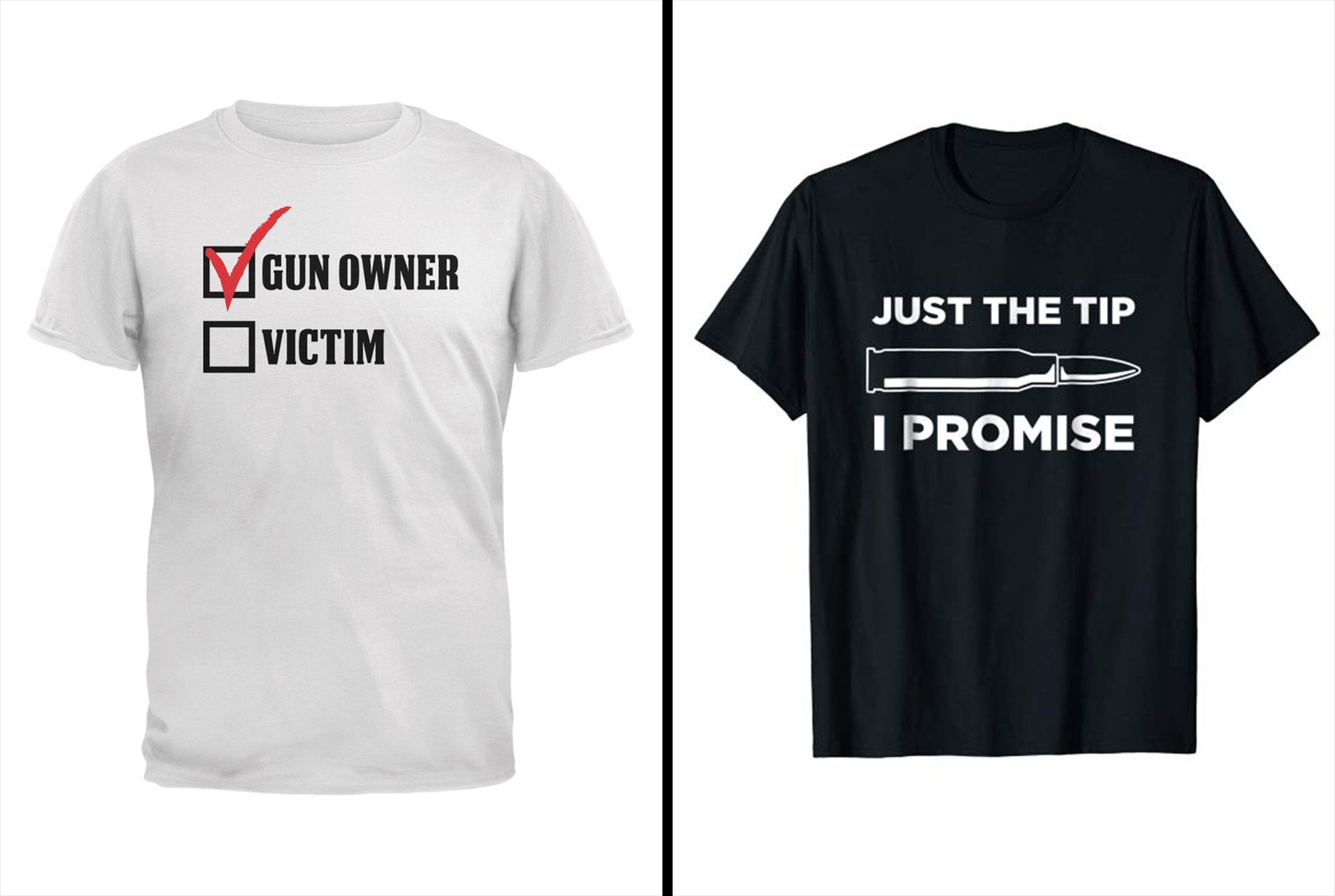 From left: Shirts for sale on Walmart’s and Amazon’s web sites.

That both sites also offer antigun violence shirts, in far fewer numbers, does little to dispel the conclusion that these retailers are fine with playing to the baser elements within the gun-culture constituency if there’s a buck — or millions — to be made. 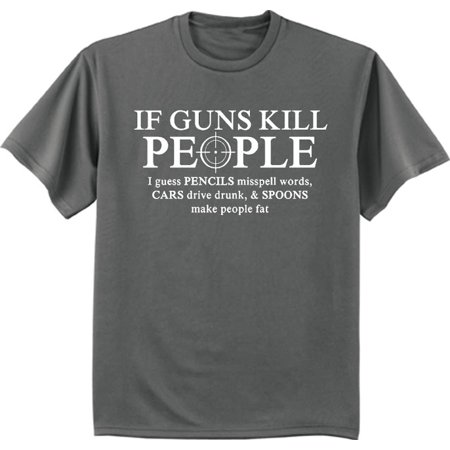 A shirt for sale on Walmart’s web site.  Courtesy Image

A sampling, from Walmart:

• “How do I feel about gun control? Break into my house and find out.”

• “This is my gun permit — Don’t tread on me,” encircling a Second Amendment seal.

• An American flag with stars and stripes made from guns.

There are also two shirts with graphics appropriated from likely unknowing sources: “Guns and coffee,” with a play on the Starbucks logo, and a plump, white-gloved cartoon hand making a shooting gesture. It looks a lot like Mickey Mouse. 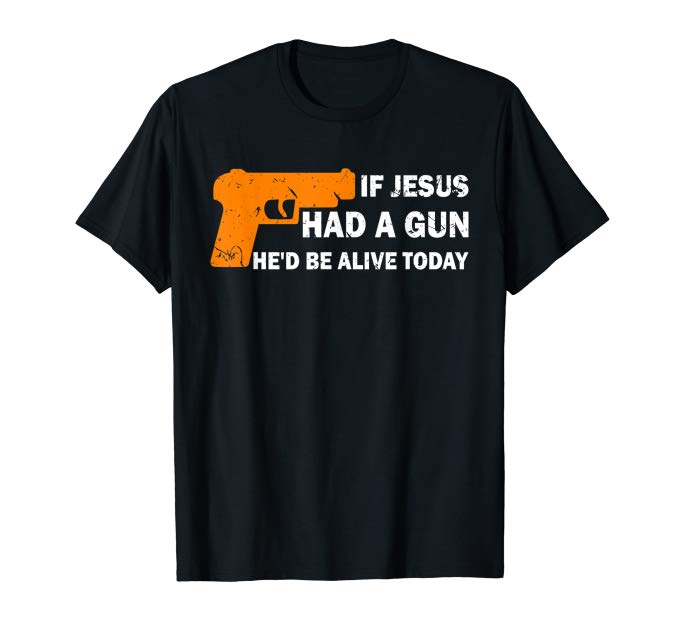 A shirt for sale on Amazon’s web site.  Courtesy Image

• “Make our guns illegal and we’ll just call them undocumented.”

• “Just the tip. I promise,” with a horizontal graphic of a bullet.

• “These guns no longer identify as guns. They self-identify as hand-held wireless peacekeeping devices. You must accept them as such, or you are a racist bigot.”

• A perversion of the peace sign, made out of guns.

To break down the nuance of where such texts and imagery fall on the repulsive scale is pointless. They speak for themselves — with far greater clarity than either company is willing to offer.

After several requests for comment over two days, a Walmart spokesperson responded just after midnight this morning with a generic statement: “We have a policy that prohibits merchandise that glorifies violence and we’re continually reviewing our assortment to remove items as needed.”

On Thursday, a man wearing body armor and armed with an assault rifle and 100 rounds of ammunition walked into a Walmart in Springfield, Mo. Earlier in the week, Thomas Marshall, an e-commerce employee in San Bruno, Calif., used an internal Slack channel to call for a mass “sick-out” in protest of the company’s gun sales. About 40 white-collar employees in that office walked out on Wednesday afternoon. In response, Walmart suspended Marshall’s e-mail access.

An Amazon spokesperson proffered the not unexpected “third-party seller” explanation, with the statement, “All sellers are required to follow our selling guidelines and those who do not will be subject to action, including potential removal of their account.”

The Amazon rep did not respond to a follow-up request for an example of something that would merit classification as offensive or hateful. Apparently, “whiny little bitch” and the twisted appropriation of “LGBT” do not. Nor does, “Fuck your gun-free zone.” 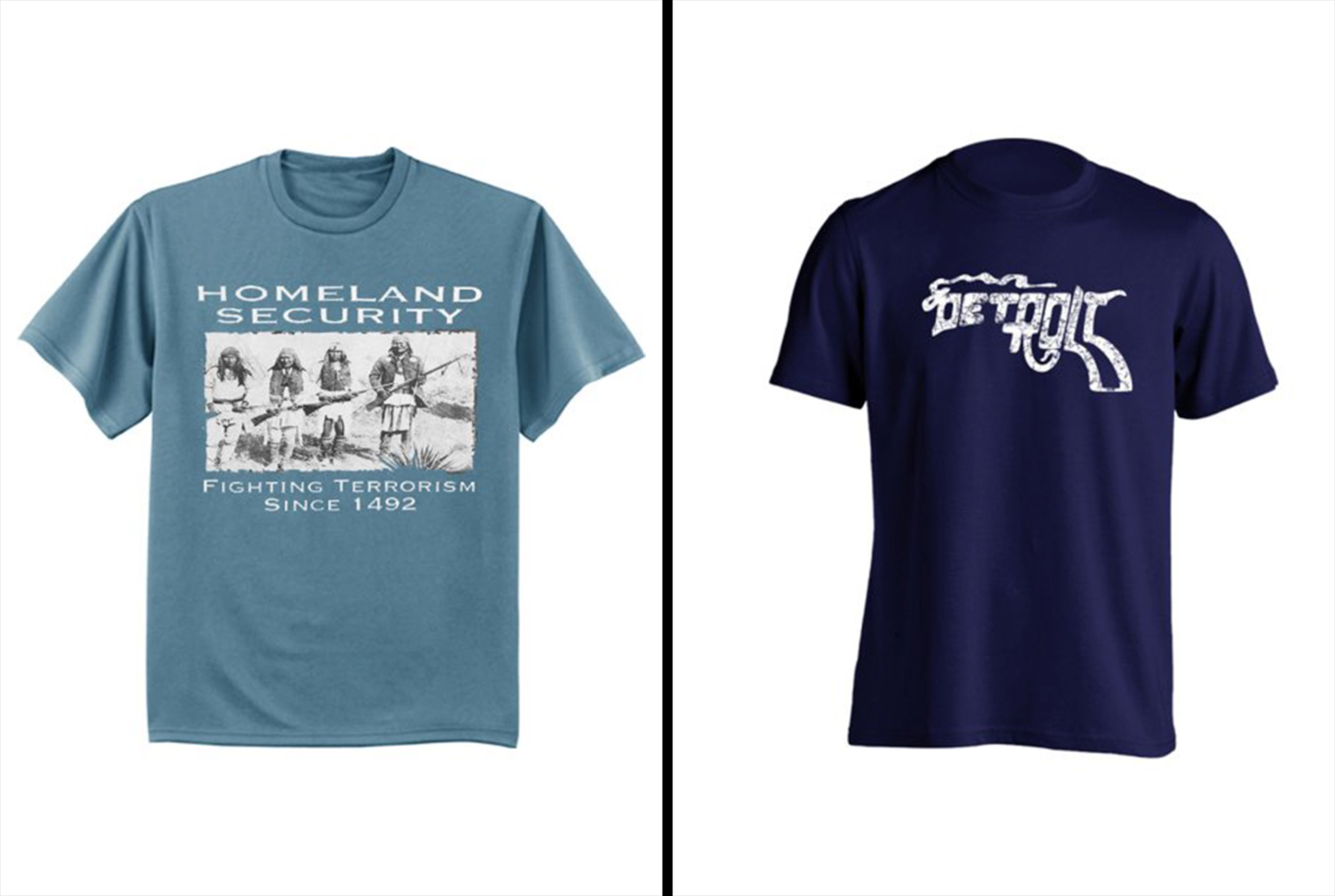 While such messaging does indeed speak for itself, it’s not alone in doing so. The consumer population also speaks for itself. That’s all of us, every day, with every brick-and-mortar purchase and every checkout of every item in every online shopping cart. Within that population, there are plenty of people who love these shirts, or they wouldn’t exist in such depth from two of the largest retailers on Earth. But, please God, there are many consumers who find such wearable verbiage disgusting and disturbing.

Due to scale and market dominance, Walmart and Amazon offer consumers pricing and convenience that no other retailers can match. How essential those advantages are is for each individual and family to decide. When it comes to pricing, there may be no alternatives. Many people struggle financially, and best price is often the ultimate determining consideration behind their purchasing. But what of convenience? “Nobody needs an AR15?” Absolutely not. But does anyone need the organic peanut butter delivery by 5 p.m. today, or the new lawnmower by Sunday? Another definitive no. Prioritizing superfluous convenience over other considerations, the kind that exist on that precipice where spoken values meet action, is a choice. There are alternatives to the retail giants, for those who care. Enough.