Bridget Foley’s Diary: He [Hearts] New York (and the U.S.)

Giancarlo Giammetti on why he and Valentino Garavani have made the CFDA the first fashion beneficiary of their foundation.

When Giancarlo Giammetti and Valentino Garavani attend the CFDA Awards tonight, it will be in a whole new context. They have attended previously as guests, and in 2000 when Valentino received the Lifetime Achievement Award, the first non-American so honored. Tonight, they are benefactors, there to celebrate the presentation of the inaugural Valentino Garavani Giancarlo Giammetti International Award, to Sarah Burton of Alexander McQueen.

In advance of the awards, Giammetti agreed to a catch-up conversation. Yes, he would be photographed, but minimal equipment, please. We meet at his apartment on 58th Street, One Beacon Court, a glorious 54 stories in the air with a wall of windows opening onto spectacular urban views and an inside view that is differently spectacular, its original clinical modernity tempered by Jacques Grange, who created an aura of uber-chic elegance built on major art.

This trip to New York was preceded by a three-day respite in Capri, where he and Valentino celebrated the designer’s birthday with a circle of 60 intimates, many of whom go back decades. “You know, Capri, you don’t have to work much,” Giammetti says. “Capri works itself. People can go just around the streets and be happy.”

Life has been, and continues to be, good. And even if Giammetti remembers a time when he “felt that people looked at us like children playing with dolls,” overall, “We have been very lucky,” he says. “I cannot say that I had ever really big problems in my life.” 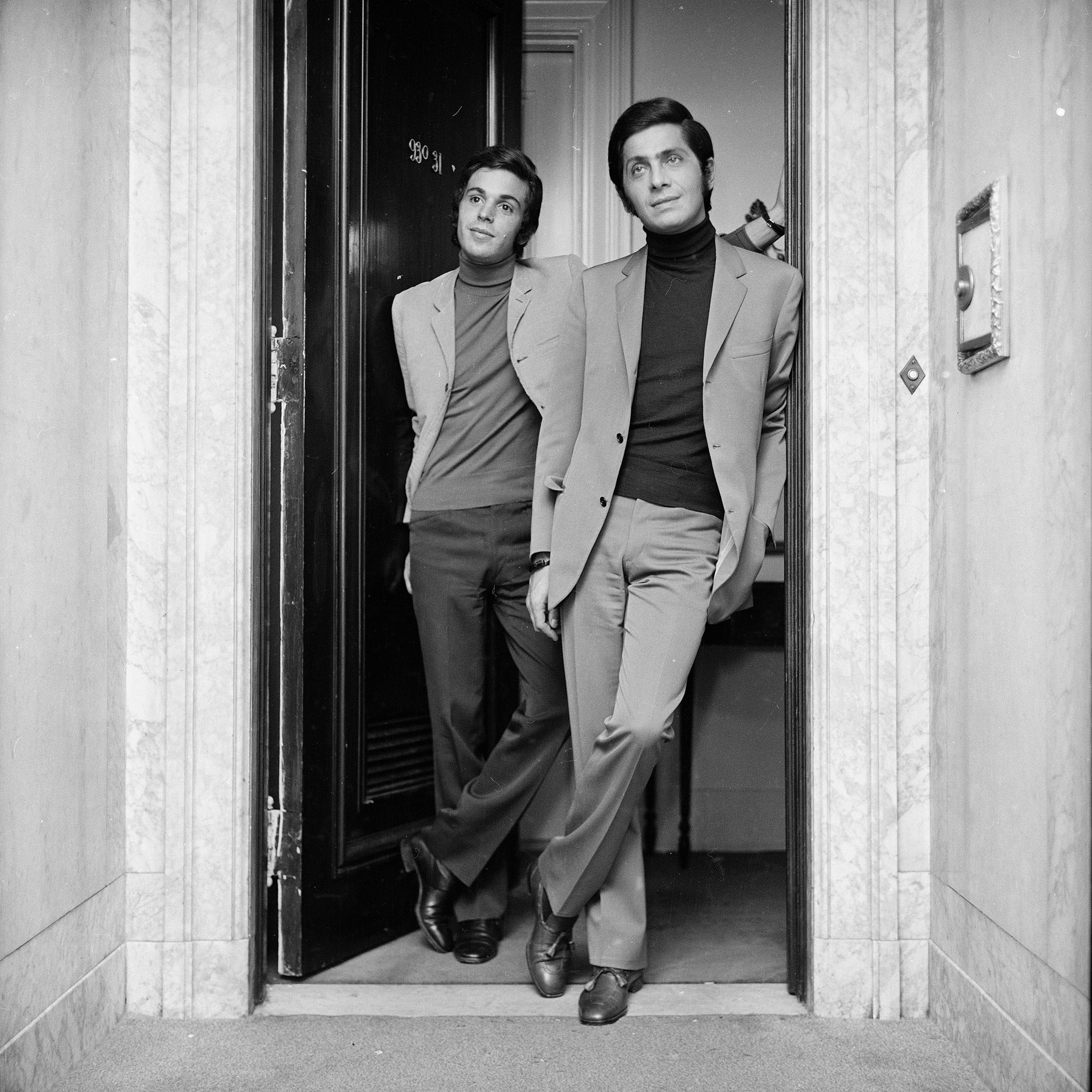 That good life can be traced in part to the early success the business found in the United States. Soon after Valentino and Giammetti established the House of Valentino in 1960, they caught the attention of the two major editorial maestros of the day: John B. Fairchild and Diana Vreeland, who both made getting-to-know-you sojourns to Rome, and liked what they found. “We were immediately launched, and thankful to this country. We became immediately more famous here than in Europe,” Giammetti says.

The memory of that early support and continuing gratitude for it are the reasons the two men have committed funding to the CFDA through the Fondazione Valentino Garavani e Giancarlo Giammetti, established in 2016. While the CFDA has recognized that sponsorship in the renaming of the International Award, the funds will go toward the Fashion Manufacturing Initiative, which connects emerging American designers to production resources. Of the recipient of the award, Burton, Giammetti notes that her exquisite work “expresses at best the concept of devotion, of respect for the heritage of an extraordinary designer that Alexander McQueen was.”

As for his and Valentino’s interest in supporting young, independent American talent, Giammetti articulates what many across the industry accept as fact, that such designers don’t have much of a chance to break out. “There is amazing talent here but they cannot express even the best of themselves…” he says. “How can those people compete with Valentino or Dior or all the houses in Europe? How can they afford the management, how can they afford the show with 60, 80 models?…Why is there not an American group to help?”

Giammetti then casually tosses in a blind zinger: “What worries me is that the big fashion companies in this country prefer to buy European companies.” A barely veiled reference to Capri Holding’s acquisition of Versace last year? “I don’t say [names],” he faux-demurs.

“So it was natural to choose [to support the Fashion Manufacturing Initiative] after my impression of what’s going on in this country in fashion, to help the CFDA in this moment. And we are very honored to do it.”

The CFDA and those brands that will benefit should be immensely honored in return. This is the first fashion involvement for Giammetti and Valentino through the foundation, though certainly not their first philanthropic effort. For example, for the past five years, initially independently and now through the foundation, the men have supplemented the incomes of 21 Roman families in need with 1,000 euros each month. They identify the families through a religious order, “one nun and her sisters.” Giammetti calls that side of the foundation’s work “really personalized.” What’s quite incredible is that sometimes these families call my secretary and say, ‘We don’t need anymore the money because I found a job. Give it to somebody with more need,'” he says.

That ongoing commitment indicates the foundation’s interest in addressing need at the most basic level of Mazlow’s pyramid, which makes this move to support fashion — and American fashion no less — all the more interesting. “I was obviously looking at the CFDA and the work that they do with great admiration,” Giammetti says.

He has retained an apartment here since the Seventies, first in the East 70s, which he shared with Valentino, and later at The Pierre — one that had belonged to Yves Saint Laurent. That was an old-style hotel apartment with adjoining rooms, and when he purchased the apartment, Pierre Bergé insisted on keeping one room for himself. For years, Giammetti hoped to wrestle it away. “It never happened,” he notes. “I don’t know who got it.”

He calls the decision to flee the propriety of The Pierre six years ago in favor of his current digs “courageous for me,” because he’s not drawn naturally to such modernist living space. Hence his enlistment of Grange, whose deft work infused “a bit of warmth” along with his signature artful grandeur. Along the way, Giammetti withstood some location ribbing from Valentino. “You are next to Alexander’s [the populist department store, by then, already long gone],” Giammetti recalls him saying. I said, “Alexander’s, it does not exist anymore. Now, there’s H&M.”

That led to talk of the collaborations on which the retailer has made its fashion name. Giammetti calls the collection Giambattista Valli just did for H&M “amazing,” but he would not want Valentino’s Pierpaolo Piccioli to follow suit. “You get a lot of attention and get to know a different kind of clientele, and it is quite amazing what they do. Those clothes today are very modern and the price is incredible. Still, I don’t believe that I would like to see Valentino doing this.”

A modern movement he opposes more strongly: the fashion “manifesto” and the politicization of fashion, particularly with messaging on clothes. We spoke on Tuesday, after Alessandro Michele had proclaimed his Gucci resort collection “a hymn to freedom” with signage including “my body, my choice” and “May 22, 1978,” the date abortion became legal in Italy.

“It’s becoming too much a habit,” Giammetti maintains. “It seems that today, people believe they have to do a statement. I’m not talking about Mr. Michele; I’m not talking about anybody. But I’ve seen a bit too much of this now. It’s so incredibly easy to do a manifesto when you have thousands of Instagrams the day after.…All the manifestos, they become a bit much, like a trademark. And I don’t really like that.”

Nor, apparently, is he fond of PDAs, even of the 2-D sort, that embraced the Valentino fall runway. “I didn’t appreciate very much the work about the lovers this season. There was a lot of embrace, and it was not my favorite moment.” He referred to the classically inspired visuals of embracing lovers that Piccioli did in collaboration with Jun Takahashi of Undercover.

Such commentary comes from a place of ongoing love for and involvement with the house. To that end, Giammetti and Valentino on one side, and the Valentino business on the other, have achieved something of a delightful anomaly in this industry: an ongoing positive relationship long after the founders have cashed out. “It seems so easy for me, but you make it sound so rare,” he says. “I guess there is a love in the house for us. There is still such a respect and love for the founder, for Valentino Garavani.” That starts with the great respect shown by Valentino’s creative successors, initially Piccioli and Maria Grazia Chiuri, and now, Piccioli in his spectacular solo work for the house. “He makes Valentino perfectly today, but still [draws] great inspiration from the ideas of Valentino Garavani,” Giammetti offers. “I’m not talking about the belt or about the fabric or about the certain ruffle. There is a spirit.”

Piccioli frequently expresses the need to stay true to Valentino’s roots as a Roman couture house, and Giammetti responds to that sentiment. “Rome itself has been terribly influential for all of us, for Valentino, for me, for Maria Grazia, Pierpaolo. It is an inspiration every moment, the air, the people…the quality of those people are quite incredible. So if [Pierpaolo] means that the Roman couture is also about the love you have for a dress, the love you put in a dress, the care that they take, it is quite incredible as a value. I think also the value of Valentino — I don’t want to use banal words like family, but definitely.”

As for what promoted the house founders to lure Piccioli and Chiuri away from Fendi years ago, he responds with amusing pragmatism. “Well, we were looking for accessory designers. And of course, when you are in Rome and you look around the corner, there are not many great fashion houses. So, yes, we did appreciate what we were seeing and we tried to get them. And they became part of the [core]. I don’t know in the other houses if there’s this kind of relationship with the designer and the other collaborators, the accessory designers, men’s designers, whatever. But there was such a profound friendship, more than just respect. They still called him Mr. Valentino. They cannot [bring themselves to] call me Giancarlo. They call me Giammmmetti,” he says, exaggerating the pronunciation of his name. “Not Mr. Giammetti, no. But Mr. Valentino, si.”

That approach has and has never been more difficult to adhere to than now, given the hyper-commercialization of fashion which, Giammetti says, “is definitely not possible to deny. It’s incredibly about money,” he says. “It’s a bit like Instagram — how many followers you have, you know? It’s all about those things.” He admires Piccioli’s brilliant navigation of such complicated terrain. “I understand that Pierpaolo has to move between that and his dreams and the past of the house. But he does it in a very fantastic way.”

And what of consumers past? Among the incredibly chic ladies who discovered Valentino, bought into the vision and catapulted the house to the pinnacle of fashion, who would be a social media star today?

“No one,” Giammetti says with a slightly rueful laugh. “Of course, we’ve got the actors, and they would all be on Instagram today. But the ladies of the past, the swans or whatever you want to call them? They would be private so nobody could follow them.”