Hermès announced its Year of Innovation in the Making, with symposium of brainiac speakers on Governors Island.

There were no pop stars in the room. No actors, no athletes or no influencers. Well, not that kind of influencer anyway, though you’d be hard-pressed to find someone today whose life hasn’t been influenced big time by Jony Ive, the longtime chief design officer of Apple who recently vacated that post to found his own company, LoveFrom, with Marc Newson.

Ive was the most high-profile personality (at least to those in the audience with limited exposure to current French philosophy), but not the most high-flying. That distinction went to Peggy Whitson by a mile. Make that miles and miles; Whitson is a retired astronaut and commander of the International Space Station. Also in attendance: choreographer Okwui Okpokwasili, afore-referenced philosopher François Jullien and paleoanthropologist Ian Tattersall of the American Museum of Natural History.

This consortium of brilliance assembled at an unlikely place — the Lower Manhattan Cultural Council’s Art Center on Governors Island, a former military base turned recreation center, accessible by a ferry that departs from the southernmost point of Manhattan. The participants turned out on Thursday at the invitation of Pierre-Alexis Dumas, creative director of Hermès, for the program ushering in the luxury behemoth’s theme for 2020. Hermès dedicates each year to a singular theme, in recent years focusing on “Nature at Full Gallop,” “Let’s Play,” and last year, “In the Pursuit of Dreams.” This year’s umbrella: “Innovation in the Making.” (An evening party for 1,500 people would follow at the brand’s vast new Madison Avenue store, opening in 2022.)

The house chose to hold the global launch in New York, Dumas said, for its “spirit of innovation,” and also, because it once proved a challenging location for Hermès. “My grandfather [Robert Dumas] had the brilliant idea to open a store here 1929. Voila. We closed it in 1930.”  Yet Dumas selected a venue overlooking Manhattan rather than one in Manhattan itself, preferring “a quiet, peaceful environment to think, to feel, to open our minds.”

The day’s program proved as heady as a fashion event gets, starting with the purpose to launch not a collection or a bag or a fragrance, but an idea — ruminations on innovation. To that end, it made a powerful counterpoint to a strong NYFW, which concluded the prior day. Looked at together, the two events spoke to the breadth and creativity of an industry in flux. 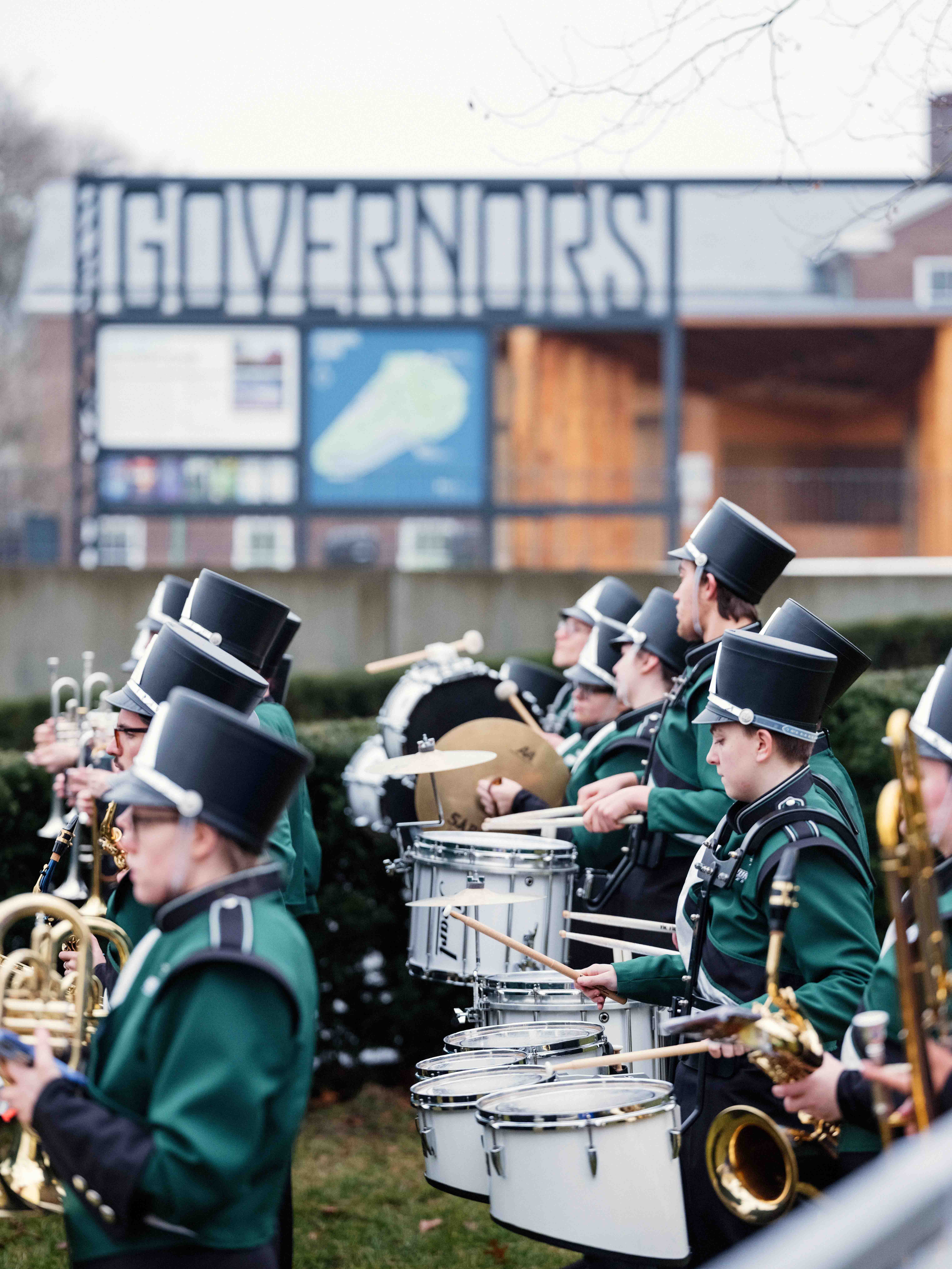 From a speaker standpoint, erudition ruled the day. Dumas could very easily have enlisted a major celebrity or social media star to wax on about innovation. Instead, he went for brainiacs who actually innovate at the brainiac level. Yet a makeshift element imbued the event, dubbed “Hermès University,” with offbeat charm. After a 7:30 a.m. pickup and ferry ride, guests were greeted at the Arts Center by the Wagner College Marching Band, which played the Notre Dame fight song, (because can you hum the Wagner College fight song?). “Professor Dumas” promised a short, one-day semester and we’d all pass, before introducing Lili Chopra, executive director of the center’s programs. Chalk boards listed the speakers and program, and guests sat at roomy school desks, the kind with desktop attached to the chair on one side (apparently inclusivity doesn’t extend to left-handers). Headphones foreshadowed a translation moment.

Jullien spoke first, compellingly for the first 40 minutes or so, after which some in the audience (well, one in the audience) became hyper aware of how far distant are her days of serious classroom focus — particularly after the distracting discovery of gum wads under her desk. (Note to self: Purell. Always Purell.) Jullien opened with why he chose to speak in French, and it wasn’t because there were probably more native French speakers in the audience of 160 than English speakers. “Translation is the future of language,” he said, explaining that languages don’t always translate exactly, but create gaps (which are different than emptiness) and those gaps “allow us to interpret and work….I don’t defend French here. I defend all languages. I defend the diversity of languages.” Translation: This would not be a day of easy-breezy musings on how Hermès updates scarf-printing and saddle-making techniques.

When Jullien turned to the primary topic du jour, he offered that nothing “is more suspicious than this great theme of innovation,” and that “nowadays, we look at innovation as a rescue.” He then delved into the importance of grounding innovation in tradition (the Hermès link, handled deftly), along the way name checking Descartes, Cezanne and Lucretius, and talking through what he called coincidence/de-coincidence, adaptation/ex-adaptation and the boredom of perfection. Once or twice he stopped to ask, “Do you follow me?”

The whole day was rich with deep thinking and ideas to which one might want to return professionally or even personally. So it peeved that a long-ago innovation and godsend to journalists, the recording device, was disallowed, never mind that one guest, Jony Ive, had a major hand in innovating the way we record.

Annoying though it was, and counterproductive to connecting dots among the speakers, the no-recording, no-pictures, no social-media press event (at least the last two restrictions in that series largely unobserved), was nevertheless characteristic of Hermès’ different-drummer approach to marketing. One person in attendance noted, that “there’s no trackable ROI here,” but that a definitive ROI wasn’t the point.

Ive spoke in conversation with Dumas. The two go back 15 years, and worked together on an Apple Watch collaboration, the tech giant’s first foray into the iconic luxury world. Ive took to the stage looking very Silicon Valley; he wore a hoodie. He’d taken the red eye and come straight from the airport, “which explains why I’m dressed like a warm cushion, for which I also apologize,” he offered.

Among other points, Ive discussed the importance of failure. “I am much more interested in trying stuff and failing than being right,” he said, “I really don’t care when it goes the wrong way. In fact, I find a perverse delight.”

He said that essential to embracing innovation is understanding that its pursuit is a course toward the unknown. “By definition, if you’re innovating, there are going to be unforeseen consequences, some good, some poor,” he noted. “Either way, you must own responsibility for them.”

As for bringing the conversation around to Hermès and what the worlds of high tech and tony tradition have in common, Ive recalled that when he first met Dumas, he was “shocked” by the similarities of “how we develop ideas. We work exactly the same. You have to be close to your materials.”

He called beauty a “powerful tool.” Conversely, while he certainly didn’t poo-poo the notion of analytics, he said addressing what people want now isn’t what his job, nor certainly that of Apple during its ascent, is all about. “As a policy, we didn’t do focus-group testing,” Ive said. “If we had, none of our good work would have gotten through.…It’s our job as designers to try to know what’s right for the future.” 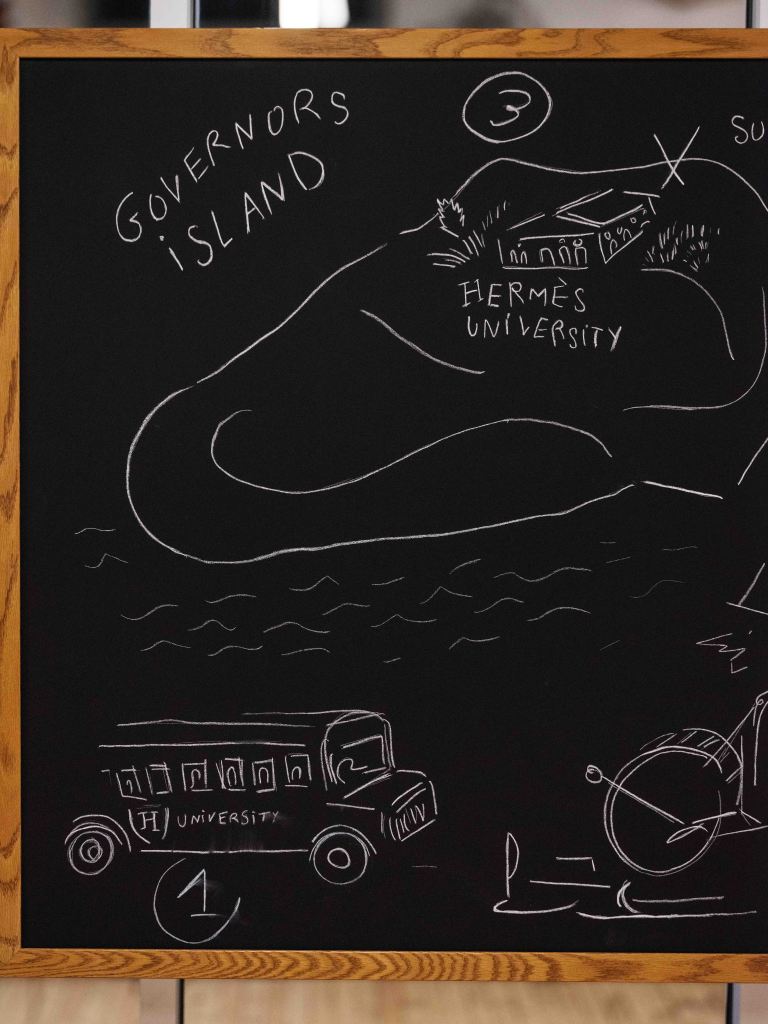 It’s a good bet our pre-human hominid ancestors didn’t conduct focus-group testing either, in creating and leaving behind what Tattersall called the “first durable artifacts” in Africa between 2.5 million and 3.5 million years ago. He ran through the evolution of the primate hand, first long, slender and excellent at gripping, to a broader hand with greater dexterity. Along with the brain developing advanced cognitive skills, this made hominids capable of making and using tools — the first chronicled craftsmanship, which was all about pragmatism; making objects beautiful for the sake of beauty was a long way off. “It was a huge difference in early human life, the difference between having a knife and not having a knife,” Tattersall said. Long after, another major development occurred when Neanderthals realized that they could start with strong materials and resharpen them for ongoing use. He then invoked a Dumas family quote: “Luxury is what can be repaired.”

Okpokwasili opened her session with a performance, from which she appeared to awake from a chair while singing powerfully. She then settled in for a conversation with Chopra, who noted that exploring the concept of slowing down is integral to the performer’s work. Okpokwasili takes the notion literally. “I do slow walks with collaborators…” she said. “There’s a tension between what it is to be yourself but also to walk as slowly as the slowest person in the room.” Her conversation focused on that concept of slowing down and that time is innovation. “Slow walks,” she said, “let my brain crackle back to be aware of myself and the other.”

“Enchante,” Whitson said when it was her turn. “That’s all the French I know.” No matter. Whitson speaks the language of biochemistry and aerospace. She did three space missions, including a protracted run as the commander of the International Space Station, and from a three-year stretch beginning in 2009 held what must be the most impressive job title in the history of job titles: NASA chief astronaut. Whitson offered that “the important thing about innovation is to look at things from different perspectives.” She cheekily worked in some fashion speak, referencing essential “accessories” and what it means to “dress for success” in space, where every occasion, including cleaning up a toilet spill, “calls for a different outfit.”

Whitson proved brilliant at speaking clearly without talking down, at one point invoking heartland ingenuity. She gave an example of how innovation sometimes springs from familiarity. When the Space’s Station vast, lightweight accordion-folded solar panel ripped while being removed from its case, everyone was stymied about how to fix it. Then a lightbulb went on when a young engineer on the ground said, “we can hold it together with cuff links.” Whitson and her crew then had to cull together the makings and craft those “cuff links.” They managed, the former farm girl from Iowa invoking some oft-spoken wisdom from her father: “You can fix almost anything with Number 9 wire and a pair of pliers.”

The Ive-Dumas conversation completed the program, after which guests enjoyed a fabulous lunch by chef  Daniela Soto-Innes — and some were lucky enough to get quality time with the program participants. I saw a very handsome boy deeply engaged in conversation with Whitson. It was Dumas’ 16-year-old son, who apparently has a thing for science. He looked transfixed, as if it were LeBron James across the table, yet stayed focused enough to pepper her with questions. Seeing a kid his age blown away by an adult woman not engaged in pop-culture mayhem was one of the best parts of the day. Innovation meets inspiration. Voila!