Let’s hope Jil Sander's third tenure at the house that bears her name is handled more gracefully than the debacle of the past few days. 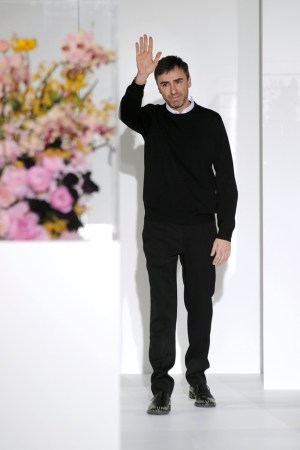 Today is Jil Sander’s first official day back at the house that bears her name. Let’s hope her third tenure there is handled more gracefully than the debacle of the past few days, when news of the shake-up erupted just in advance of Raf Simons’ last show.

Simons leaves — more correctly, he was unceremoniously dumped — at the top of his game. A designer of women’s wear neither by education (he studied furniture design) nor first sartorial vocation (he started in men’s), in 2005 he took over a house in distress after some bad decisions — including the one by its founder to sell into a situation, which, in retrospect, would almost surely lead to a clash of personalities — and turned it around, at least creatively. He made it not only relevant again but essential.

Under Simons, Jil Sander became one of a handful of fashion’s must-sees. His clothes have been consistently provocative, vibrant, thoughtful. And gorgeous. His past four collections — culminating with his breathtaking tour de force on Saturday — have been some of the most exciting and important by anyone in recent memory.

This dismissal is inexplicable to me. A matter of commercial viability? If these clothes aren’t salable, I’m sad for fashion. In her comments to WWD on Monday, Sander invoked the need “to break rules, if there is a good reason. Now is the time to be daring, there are few new ideas.” A good number of fashion’s recent good ideas emerged on Simons’ runway, notably the modernization of classic couture elements and their infusion with a sporty attitude.

Sander also said, “I feel that the spirit and enlightened development of basics has a lot to do with the future of fashion.” Agreed. Up and down the food chain, basics will always form the core of most people’s wardrobes. But at the luxury level at least, such basics should provide background for greater fashion. If the passion, thirst and — bottom line — market for such fashion no longer exists or is endangered, then why do we all sit on our fannies at these shows for four weeks straight, spending lots of corporate money along the way? So brands can build their fragrance businesses? Basics, even the toniest ones, can now be seen to fine advantage on Ed Filipowski’s Digitalfashionshows.com. If fashion’s future lies primarily in basics, is the advanced designer species robbed of its raison d’être? Should the sensible, savvy creative director move in and take over?

But I digress. That’s a different, if related, topic for a different day. My point here is twofold: First, I just don’t get this change. Second, it was handled badly. On point one, how many shows are genuinely memorable by season’s end, let alone into the future? Oh so few, and Simons’ percentage over the past few years is sky-high. Yet of the industry comments I read in WWD Monday, most (except for those of Anna Wintour, Ken Downing and Linda Fargo) veered highly political, toward “The King is dead! Long live the Queen!” making me think I’m in a minority. Why? Weren’t some of the respondents among those who left Simons’ shows gushing?

Back to the commerciality issue: Was a proper infrastructure ever installed at Jil Sander? I don’t know. There have been mentions of the company’s inability to build an accessories business. Was that essential support in place? Though one bum handbag does not a production crisis make, I wonder. At Christmas, I bought a glorious Sander runway bag, only to discover that day that the handle leather had split. A production issue; not a design issue.

On point two, let’s assume that for whatever reason, Onward Holdings Co. Ltd. and Gibò Co. SpA decided it was time for a change. It’s their right. No matter how talented, respected or productive one has been within the workplace, as well-employed people from Tom Ford to Peyton Manning know, we all serve at the discretion of management. Perhaps, despite her prolonged absence from the workaday realities of luxury fashion, Sander’s abrupt availability after her split with Uniqlo was too enticing to resist.

That doesn’t excuse the clumsy handling of the change — even given that the press, primarily my dogged colleague Miles Socha — was all over rumors that started percolating weeks ago. Where did they come from? I have no idea, but their escalation just might have had something to do with Sander strolling openly around Première Vision, and, when asked why by WWD Japan, responding that the announcement of her next project would come during the Milan collections.

It’s hard to believe that this longtime master of the Garbo technique didn’t consider that silence (or just not being there in the first place) might be golden. Surprising conduct from Sander, who loves to project elegance of behavior. (Nor is it her first suspension of such; when retailer Janet Brown, who was among Sander’s first and most impassioned U.S. champions, died, Sander refused to contribute to Brown’s obit with more than a one-line comment.) Knowing well in advance that fall 2000 would likely be her (first) last show at the then Prada-owned company, Sander orchestrated it to the nines, the presentation calm, the audience “intimate” and her show notes offering words of fortitude. She’d been able to write her own exit scene; she wasn’t blindsided. As it turns out, with far less time for psychological preparation, Simons’ show, and the spontaneous audience outpouring, felt genuine and moving. No matter. It’s surprising that Sander would act with such apparent disregard for another designer.

The chapter may be written, but not the book — or books. Sander may have a lot of fabulous fashion left in her. We know Simons does. Here’s wishing them both all the best.