Three-plus hours of witty banter are a lot to take. Three-plus hours of un-witty banter are interminable. That reality made watching the Met Gala red carpet on E! tough going. There was just too much space between major arrivals, and the four off-site commentators — Giuliana Rancic, Brad Goreski, Zanna Roberts and Elaine Welteroth — could only give so many rounds of applause for this or that person’s contribution to the culture before the applause rang hollow.

But of course, the red-carpet viewing experience is about more than killing time between arrivals. At some point, the annual Met Gala crossed over from the dressed-up, elite-party opening of a major museum exhibit to the head-spinning, elite costume-party opening of a major museum exhibit. There’s a significant difference between the two. The former was a genuine celebration of fashion, the only high-profile place where the best, purest fashion — the most dramatic, flamboyant, outré — could have a moment of glorious exposure, where designers and fashion-loving, A-list celebrities could flaunt it without fear of the Monday-morning reprisal that greets Oscar ladies deemed by mass public opinion to have gone too far.

Back then, the Met Ball was a fashion crowd dressing in real fashion in celebration of real fashion. Rather than taking umbrage at whatever perceived excesses might arise, viewers who followed the event appreciated the experience as a window on this decadent world populated by both famous celebs and fashion insiders still largely unknown to the larger public. Those watching who enjoyed the sport of looking down on fashion could find plenty of fodder and those who love fashion, glorious examples of its most elevated forms.

Somehow, that fashion orientation of the Met Gala morphed into something else. The event’s red carpet — pink this year, in honor of the exhibit’s camp theme — has become marked by a sartorial silliness. Self-indulgent, expensive silliness, that costs the brands creating some of the more elaborate looks a small fortune. (Earlier this week, one executive mused to me about ROI, saying, “It’s great fun, but I wonder if we’ll see a bottom-line impact in China. The market certainly isn’t here.”)

Financing aside, if that self-indulgent, expensive silliness created a primary takeaway of wonder and joy, then bring it on. But increasingly in recent years, that hasn’t been the case; certainly it wasn’t on Monday night. If you think defining camp is tough, Andrew Bolton, the Met curator in charge of the Costume institute, agrees. In a lengthy conversation with WWD’s Rosemary Feitelberg, he dissected the concept in considerable detail without defining it. “Camp is like sand,” Bolton said. “It falls through your hands. Just when you think you’ve got a rock out of it, it turns into sand again.”

However sandy and elusive our individual readings, most of us perceive camp as extravagant and over-the-top, defiant in its artifice, and existing beyond the often-mundane parameters of our everyday lives. As Lena Waithe spelled it out on the back of her jacket, “Black Drag Queens Invented Camp.” Most of us don’t live in a black (or white) drag-queen world, or other world associated with camp. We thus find its bravado extraordinary, and our interest is heightened. But as anything exceptional becomes familiar, its allure wanes — even exceptional beauty. Take a couple of examples from the Met — Naomi Campbell and Karlie Kloss. It’s safe to say that most people consider them extraordinary in their natural attributes. But we wouldn’t think that if the majority of women we know looked like Naomi and Karlie. Then they wouldn’t be extraordinary — they’d be average.

Such is the case with a gigantic circular train, a chandelier for a dress and any number of getups sprouting winged appendages that look ready for takeoff. First viewing, your reaction is whatever your reaction is — wonder, joy, amusement, shock, irritation. Twice — more of the same, with less impact. And so on, as goes the law of diminishing returns. Three hours in: When will this be over? Sure, Zendaya is a beautiful girl whose Cinderella dress lit up bibbidy-bobbidy-boo style, just like its animated inspiration. But we already saw Katy Perry, not only 40 minutes before, in her two-tier chandelier, but also at the 2010 Met Gala, when the ploy of a light-up dress felt fresher and more sweetly subversive than it does now. (As for the hamburger Perry changed into, that, too, has precedent — a certain Lady’s less cute, more biodegradable meat dress.)

All of these getups had to follow Lady Gaga’s delightfully wacky performance-art entrance, during which she disrobed in stages, from a massive shocking pink opera coat to demure pinup-girl undies, all designed by her longtime friend Brandon Maxwell. When the creative climax occurs at the front of an event, it’s downhill from there. While in other circumstances, many of the elaborate looks that followed Gaga might have been plenty memorable, in this case, most will fade quickly from memory. (Granted there were some exceptions, Like-an-Egyptian-With-Mega-Wings Billy Porter at the top of the list.)

Think back on the wildest of Oscar moments — Cher all Bob Mackied out in 1986; Bjork swanning around in 2001; even Barbra Streisand, in 1969, in the Arnold Scassi see-through pajamas that seem so sedate today. Those looks still resonate because everybody else present wasn’t playing a futile game of one-upmanship. Instead, they were dressed — here’s that word again — in some manifestation of normal. 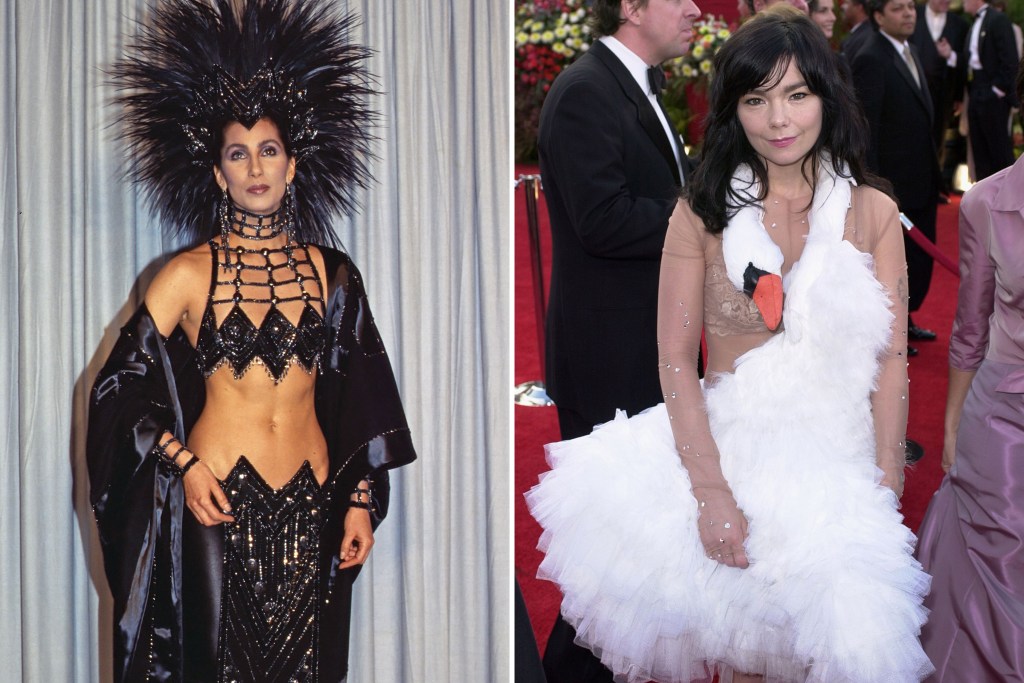 At the Met, too much over-the-top converged into a different kind of normal, and ultimately, into a sea of so-what. That’s before you even give serious consideration to the deeper manifestations of camp and whether, in a world increasingly open to different ideas (albeit with a long way to go), real camp can still flourish. To that end, probably the night’s most interesting look belonged to Ezra Miller, whose visage of multiple eyes worn with gender-bending pinstripes by Burberry’s Riccardo Tisci could trigger a deeper conversation on how we interpret gender through clothes. Most of the evening’s looks didn’t come close to that level of provocation.

But wait! Enter one Gwyneth Paltrow who, after the 2013 Punk-themed gala famously dubbed the event “so unfun.” [For other favorites, see here.] She hit this carpet in audacious non-compliance with the evening’s norms, radiating relaxed grace in a pale yellow dress by Chloé’s Natacha Ramsay-Levi that fell unfettered from a shirred, high-collared yoke. It had the ease of a nightgown. Gwyneth looked beautiful and — get this — comfortable; no train to trip on, no wings to flap, no gut-wrenching corset. If camp is about boldly flouting convention, on this particular night, Gwyneth was its queen, and gloriously so.