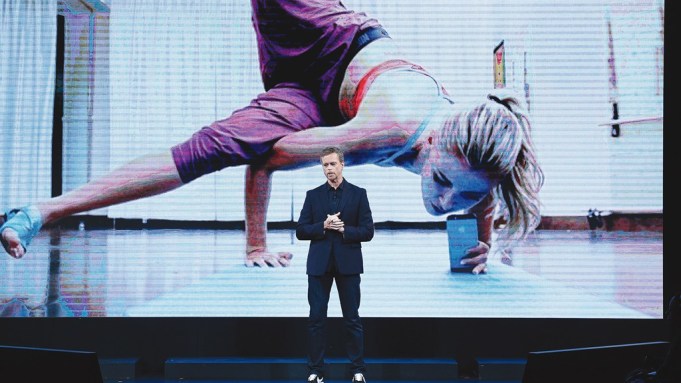 There was a whole lot going on at opening day of Nike’s two-day Women’s Summit at Spring Studios, not all of it terribly well-organized, but the takeaway could not have been more clear: Nike loves the ladies, and it plans to marshal that love into a 40 percent increase in business by 2017. That’s a cool $2 billion on top of the current $5 billion worldwide.

Another takeaway was that, while Nike may be brilliant when it comes to performance research and development, its fashion show proclivities swing a little cheesy. (Not to mention counterproductive. One part of the show occurred on a runway lined with rows of wispy, desert-looking fauna between which the athletes and models walked, partially obscuring the merch, particularly the sneakers.)

But who are we to argue with five billion bucks? Or a female digital community of 65 million as well as two apps, the Nike+ Training Club App and the Nike+ Running App, that have been downloaded 16 million and nine million times, respectively?

In his remarks to open the show, chief executive officer Mark Parker spoke about the intense degree to which women are shaping the fitness world and noted that today, they hold more gym memberships than men. In a brief postshow interview, he elaborated on that explosion. “It’s a cultural shift,” he said. “It’s a convergence of a number of things — the awareness of health and fitness and the importance, not just of health, but of the emotional [aspect],” he said. “And there’s a social element to it.”

About that $2 billion projection, one area primed for growth is Nike’s already explosive e-commerce: 70 percent growth overall in the last quarter with purchases by women up in the triple digits. “The whole digital e-commerce experience is getting so much better,” Parker noted. “The style guide helps. There’s fewer clicks to get through — a lot of those basic improvements are happening. But it does come down to the product, how good is the product, how easy are you making [the experience], how compelling is the presentation.”

As Parker noted, fitness is integrated into the cultural fabric. So are other aspects of Nike’s reality, including its relationship with the NFL, whose uniforms it provides.

Given Nike’s focus on women, does the brand have a seat at the league’s table when it comes to developing a domestic violence policy? “I wouldn’t say a seat at the table,” Parker said. “But we have made our position known. We’re an important partner, so we think it’s important to make our position known. I think they, by their own admission, they have trailed the play, so to speak. I think they’ve learned a lot. I’ve spoken to Commissioner [Roger] Goodell. I think he’s learned a lot himself, personally, but also the whole organization. Domestic violence and child abuse is something that is not tolerable.”

Yet Parker stressed that despite the horror stories, he believes in the affirmative power of sports. “We take the cases of athletes in these situations case by case,” he said. “I’m a firm believer that athletes and sports are an incredible source of inspiration for people around the world.”

Back to the event itself, the runway show featured two parts; one had 27 athletes from around the world including Nike stalwart Joan Benoit Samuelson, Russian skater Adelina Sotnikova and Chinese tennis player Li Na, who all wore gear that could best be described as basic. That was followed by a showing of Nike’s new collaboration with young Brazilian designer Pedro Lourenço. Lourenço showed a collection of black and beige that was appealing, if low key. If the line takes off, it could be quite a boon to his minuscule ready-to-wear business. But what attracted him to the partnership was the chance to take advantage of Nike technology. “It’s really important not just for the business side, but more for me as a designer to experiment with technology, which is something in my line that is very important to me. With Nike I had the possibility to use all of their tools to develop technology on clothes. I think that’s the next big step in fashion.”

Other collections, some of a feistier visual ilk, were shown off the runway in various “rotations,” although finding them took more effort than that warranted by the promise of a few pairs of vibrant tights.

Amy Montagne, vice president and general manager of Global Nike Womens, counted among key areas of development performance tights, sports bras and shoes, including Flyknit sneakers, which look fabulous. “This is a versatile training shoe. It’s the lightest weight, but superstrong and supportive.” One mélange knit in a delightful pastel called to mind Chanel’s much meatier tweed sneakers. But Nike will never be about beauty — or any fashion trend — for its own sake. “We will always, first and foremost, start from the athlete, innovation and performance,” Montagne said. “That is what inspires us.” And the promise of all those extra billions doesn’t hurt.