The designer is launching Live Free, an essentials collection of versatile, high-function clothes with an antibacterial extra.

Phillip Lim has always been a thoughtful sort, his conversation as considered as his meticulously conceived and executed collections. Still, the strange awfulness of 2020 has deepened his introspection, evolving and clarifying his positions on need, want and what matters in business and life in general.

“Everything is so precious,” Lim said, taking a Zoom-monitored stroll through his white brick-walled apartment before settling into a comfortable spot to chat.

In the moment, he wasn’t referring to keeping his 3.1 Phillip Lim business going, or to Live Free, the essential collection launching today. Rather, the observation came in an exchange about how our poor immigrant relations valued basic household paper products. My Irish grandmother got damn mad if she caught you using one too many paper towels; Lim’s Chinese mother taught him as a child to fold toilet paper into squares; it went further that way. Until the feared shortages early in lockdown, neither of us fully appreciated our forebears’ thrift, nor could we have imagined thwarted access to Charmin. 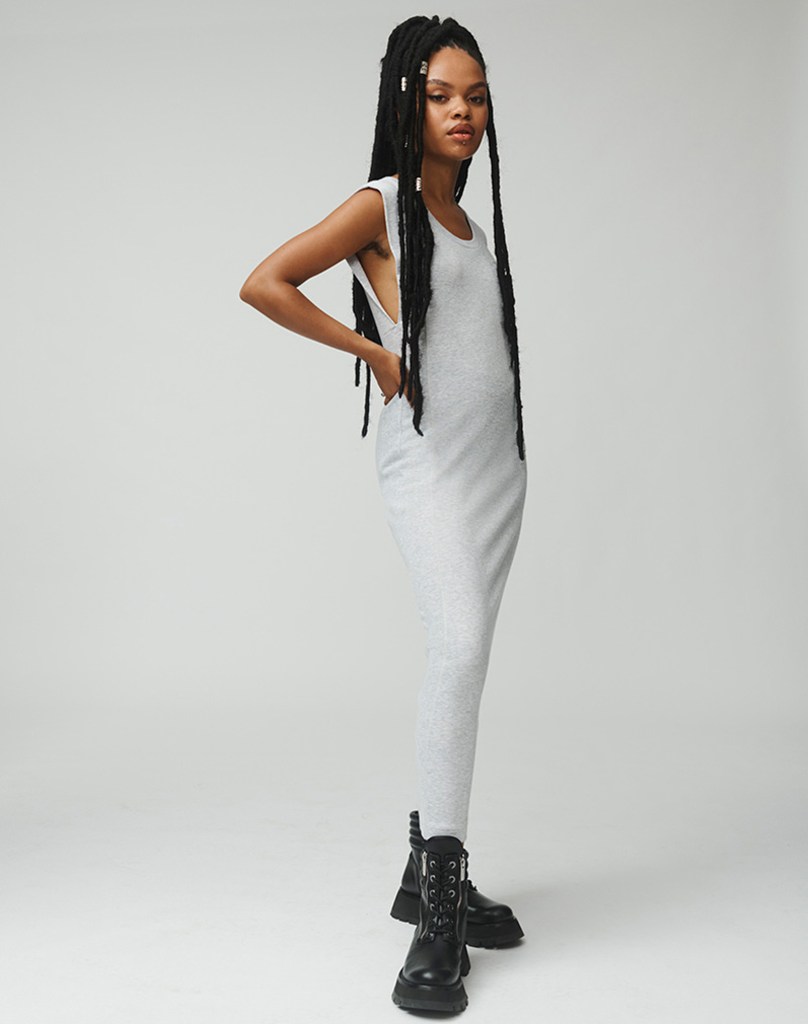 The distinctions between need and want, the necessary and unnecessary, have been very much on Lim’s mind of late, as has the notion of adaptability. Personally, he’s become a Citi Bike guy — the heck with cars and Uber. On the work front, as the coronavirus struck, lockdown ensued and people more or less stopped shopping, Lim and his partner Wen Zhou, who founded the company together back in 2005, considered all kinds of possibilities — including shuttering the business.

On March 17, the company closed its spacious, chic Liberty Street headquarters for quarantine, anticipating a short-term situation, before weeks turned into months, and “everyone was just shocked,” Lim recalled. “Wen and I realized that, oh God, when this is over, we have to address what we’re going to do. She asked me, ‘What do you want to do with this company? Do we shut it down, do we start back up, what do we want to do with it?’”

They decided to forge on, aided by the decision to exit the office lease. Lim expressed thanks to their landlord, who released them of responsibility with 10 years left. “We were very transparent, and by their good graces, they let us off the lease. They saved our lives,” Lim said.

At the company, relieved of the albatross of excess square footage, many jobs will be done remotely for the foreseeable future. Many jobs, but not all. Lim found far more modest quarters in Chinatown, where he’s set up a design studio, and he and Zhou have reimagined their Great Jones Street store as the company’s epicenter, its ample basement space allowing them to create “a lounge/work environment where people will satellite in and out freely.”

Reevaluation of the business didn’t begin and end with the real estate. Lim has spent much time mulling what kinds of clothes are right for now. “I was feeling like, what is the point of this?” he said. “It was our ethos from the beginning to always make clothes that addressed what we needed. We started with that mission of making clothes for ourselves, that we needed and could afford, could go to work in, could start our careers in.” 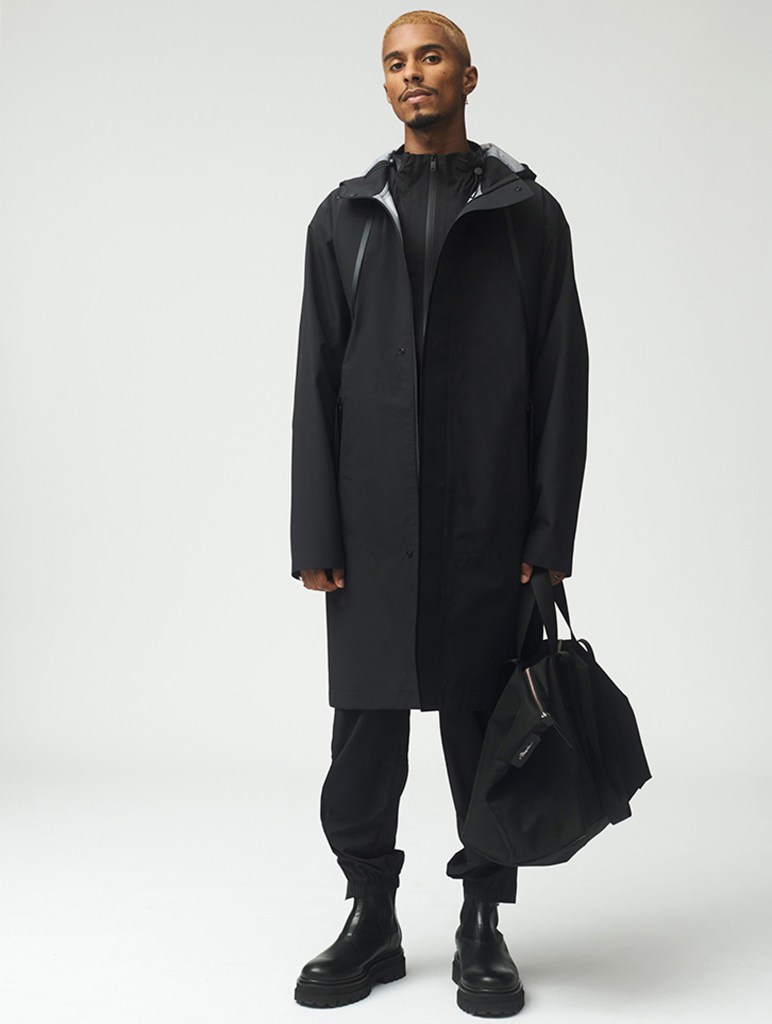 Donis.BK in the Win-Breaker, Trackless Pant and Essential Parka with Deconstructed Duffel.  Courtesy of Phillip Lim

Fast-forward 15 years. “What do we need now? We need to address the situation. What would make people feel good, what would give people peace of mind?” Lim mulled it over and came up with his answer: “I want to feel free again, I want to be able to live free. We took that for granted.”

The thought was more than fleeting, as Lim homed in on what it means to “live free,” and whether that heady notion could be put “in the context of clothes.” He decided it could, that clothes can facilitate freedom in a very tangible way, from life at home to getting around under sometimes challenging situations. Clothes for the way he lives now: “A Zoom meeting at home in the morning and then hop on that Citi Bike and go to an office or two for other meetings, and then hop on that Citi Bike and go to a meeting at the store, back and forth. I wanted clothes that were dealing with the moment.” To that point, he thought about “some sort of protective layer to provide peace of mind.”

By happenstance, he and Zhou met a supplier who works with Fuze Biotech, a company that has created an antibacterial, chemical-free compound for application on various surfaces. According to its web site, “Fuze is a safe, sustainable, non-ionic application that permanently adheres to textiles and surfaces to eliminate and prevent the spreading of odor-causing and infectious-disease-carrying bacteria.” While its uses so far have been primarily industrial, it has been used as a treatment on consumer textiles, including performance wear. Lim thought that seemed in sync with the concept coming together in his mind, inspired by, but distinct from, ath-leisure. “I call it ‘at-leisure,’” he says. (Even that’s a misnomer, as Lim’s own, active Citi Bike-facilitated work schedule suggests.) 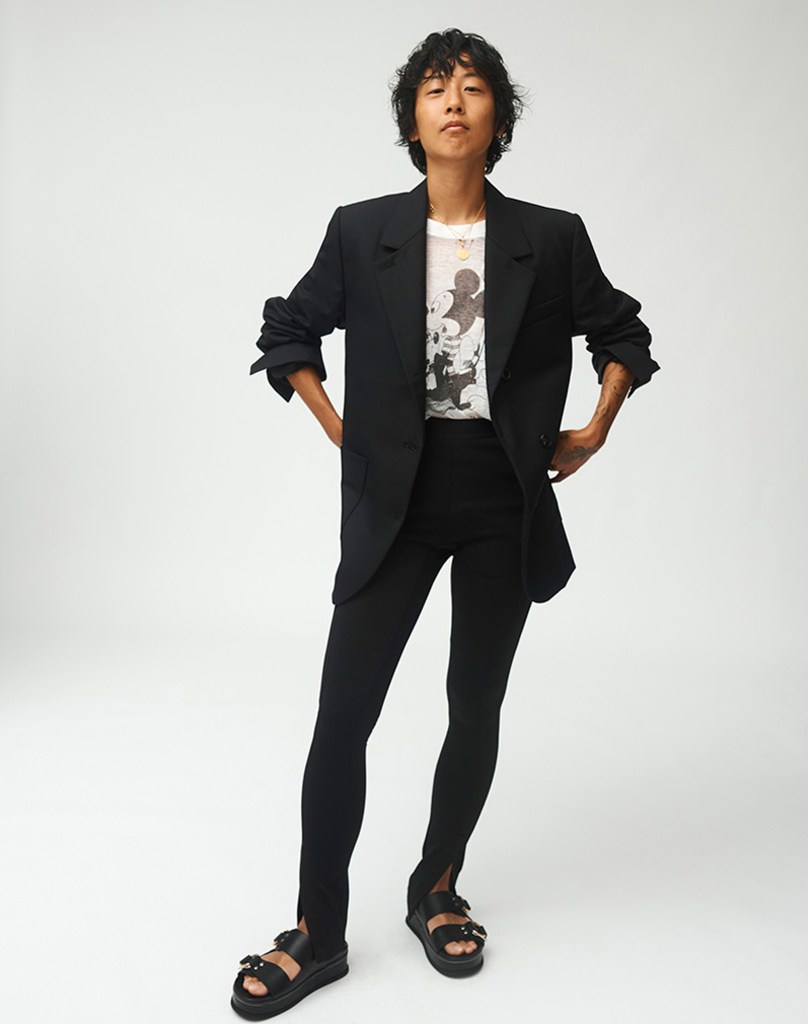 Masami Hosono in the Everyday Legging and Boyfriend Jacket from 3.1 Phillip Lim.  Courtesy of Phillip Lim

The result is Live Free, a collection of essentials for women and men launching today, exclusively on the company’s web site and at its brand stores. The Essential T for women and men; for women, the Everyday Scoop Dress and Everyday legging; for men, the Everyday crew and Everyday Jogger, as well as masks and a duffel bag. Parkas and a tracksuit will be added in December, and in January, pieces including a cashmere cardigan and boyfriend shirt for women and a jacket and trousers for men. Prices range from $65 for the T-shirts to $550 for the triple-layer parkas in coated nylon taffeta.

For the look book, shot by photographer Jai Odell, Lim wanted a broad range of people, and did word-of-mouth scouting, asking friends to suggest people they found inspiring. That resulted in a compelling casting: journalist Noor Tagouri; social justice activist Livia Rose Johnson; DJ/producer Donis.BK; hairstylist Masami Hosono; musician Simon Pace, and photographer Peter Ash Lee. “This was shot through everyone’s good will,” Lim said. “Everyone knew that there was no budget. It was done on a shoestring because that’s all we really had.”

With Live Free in development, Lim and Zhou knew from the start its model would be direct-to-consumer — a pivot they consider essential to the long-term health of the company. “The brilliant thing about direct-to-consumer, it’s our calendar. We are trying to get off this idea that we have to constantly deliver. It should be more about when is it right to deliver in season,” Lim said.

Yet despite the challenged wholesale reality, the partners do not foresee a full transition to d-to-c. “We don’t know exactly what the perfect model is,” Lim acknowledged. While the the company will approach initiatives on a case-by-case basis, “we still have 3.1 Phillip Lim as a cleaned-up wholesale strategy.”

By “cleaned-up,” he means that the company had decreased its number of stores by about 30 percent. Wholesale accounts for about 80 percent of the brand’s business, and d-to-c, 20. The goal with no set timetable is to increase that portion to at least 60 percent. The brand has also tightened up the size of its collections — by a whopping 60 percent. Lim noted the fallacy that bigger collections mean bigger business: “Actually it just cuts into your margins because of the production expenses. When we cut all the collections back and made everything more focused and purposeful, the depth of the order has been increasing.” 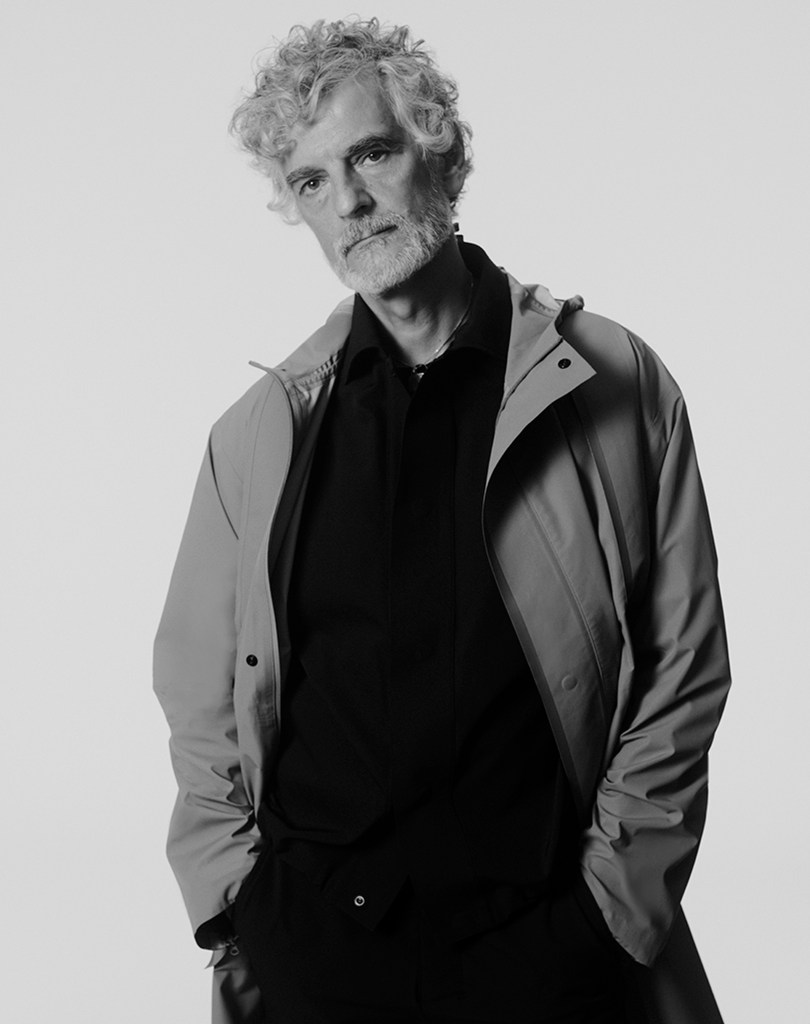 Simon Pace in the Coach Jacket and Essential Parka.  Courtesy of Phillip Lim

Lim has removed seasonal labels, numbering his annual collections “0.1” through “0.4.” During the spring 2021 season in September, he showed “0.2 Capsule Collection” to retailers, but “kept dark” in terms of press, and expects to continue that respite at least through February. “I want to take this moment for ourselves. Let’s really clean up, let’s realign. It’s been such a pleasure to work without outside pressure.”

That includes the pressure of the runway. “When you’re doing shows, you have to do show things,” Lim acknowledges, adding that this moment isn’t suited to such editorial bells and whistles, but rather “what people need now.”

That approach led to a strong 0.2 season, in relative terms. Though business is down overall, bookings came in 20 percent over budget, a happy increase that Lim maintained humbly wasn’t based on the strength of the clothes alone. “It’s a testament to having good relationships and being consistent with suppliers, with vendors, with our wholesale partners. It’s about the loyalty and the history with each other.” 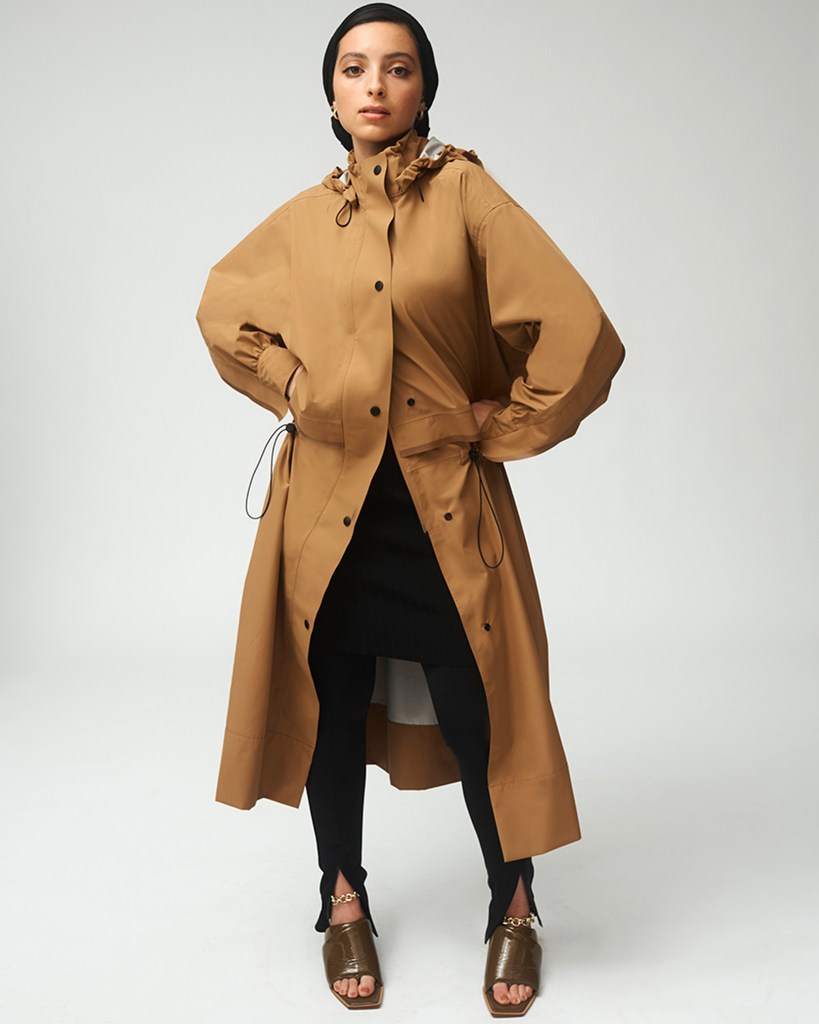 Noor Tagouri in the Essential Parka and Everyday legging.  Courtesy of Phillip Lim

While those relationships proved solid, and the retail executives not dependent upon the glam of the runway to impact their buying decisions, Lim hasn’t sworn off shows forever. “It’s that eight, nine, 10 minutes that everything is silent and the message is not cluttered. It’s what we’ve worked for,” he said. “But it’s a relief that we can take this moment to get off that hamster wheel [of a show every season].”

Looking ahead, Lim expects to do a show when it makes sense, but he’s “deathly afraid” of remounting the business-as-usual wheel. “It’s impossible. My mind-set, the world — they’re not there anymore. It’s more intelligent now, it’s more purposeful, and it has really realigned and recharged the way I want to approach how we make things, how we create fashion. My take on fashion is not a fantasy, it’s not the escape. It’s the solution.” 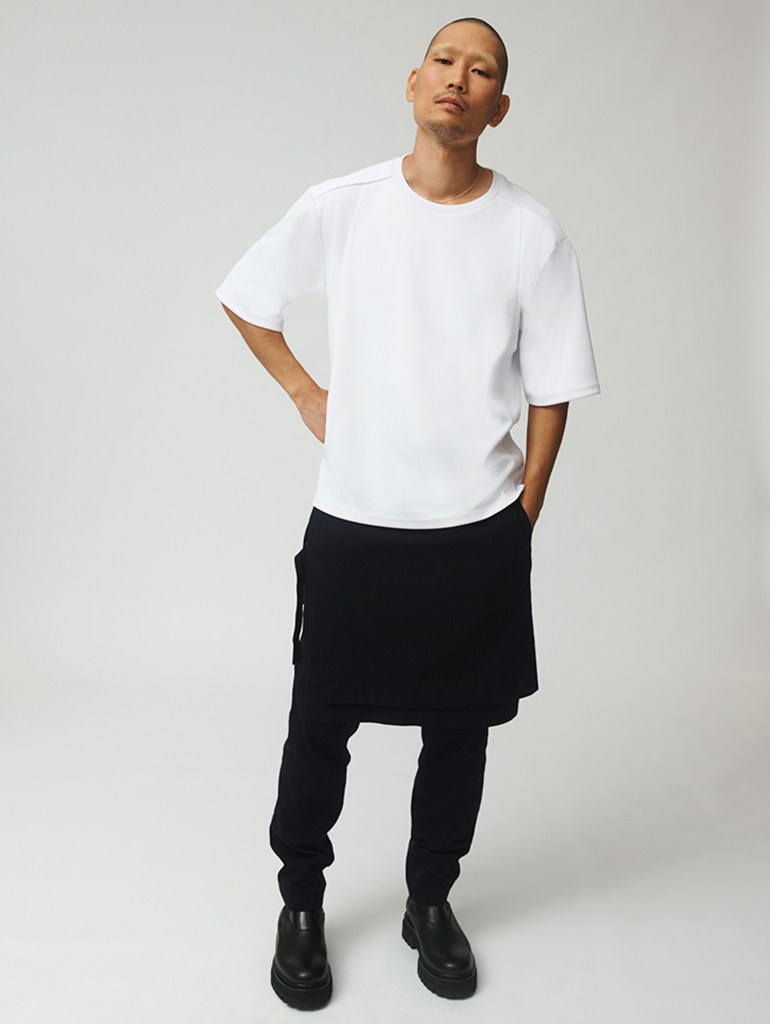 It’s also about being grateful. For 3.1 Phillip Lim staffers, for the brand’s retail relationships, the understanding landlord, and his and Zhou’s own ability to adapt and forge onward. And for the consumer — which Lim literally spells out. The label of Live Free has a small subtitle: “with gratitude,” words he started “sneaking” onto the labels of his accessories a while back, “a secret thank you from me to [the consumer],” Lim said. “Now, I feel, ‘let’s just make this more explicit.’ Because we are grateful.”