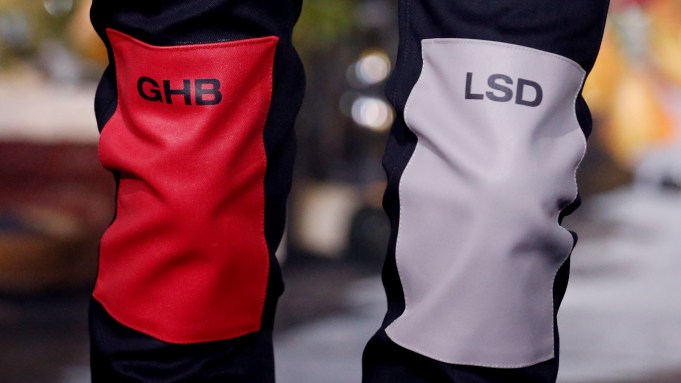 Really Raf? Take away the pop-culture touch points and the excruciating erudition of 500-plus words of deep-thoughts show notes (the former apparent to many viewers only after reading the latter), and you’ve got a collection of otherwise beautiful men’s clothes that intended to titillate with overt drug references. (They looked beautiful in pictures, to my nonexpert eye. I don’t cover men’s and wasn’t at the show.)

The point, Raf Simons’ show notes explained, was “to neither glorify nor condone the culture(s) of drugs; rather Simons seeks instead to consider the persistent, almost ubiquitous presence of narcotics (prescribed or otherwise) within our society and acknowledge our often-conflicted relationships with them.”

Fashion needs provocation. It even needs pretension — meaty material that we can sink our claws into, or smugly reject as the emperor’s too-familiar new clothes, as we choose. God knows, there’s enough mundane out there these days. Fashion can challenge; it can initiate or further essential, sometimes difficult conversations; it can and should reflect its times not only via a shoulder slope or penchant for expensive hoodies, but by addressing the mood of its moment, whether in embrace or rejection. Many of this season’s men’s shows projected an attitude of gloom, and with good reason.

In its desire for relevance, fashion often takes a powerful cultural stand, and at times crosses a line. To the latter point, as for when, there’s no concrete boundary. We all probably have our own fault line, definable by that oft-invoked, spot-on Supreme Court description of pornography: We know it when we see it. Yet fashion crosses lines only figuratively. We think of fashion as a living, pulsing part of the culture, and philosophically, it is. But it only lives and pulses as directed by its creators and consumers. Humans cross lines; concepts don’t.

On Wednesday night, Raf Simons crossed a line with a flagrance that was beyond distasteful — and not in that fun fashion good-taste/bad-taste kind of way. Exactly what line — sensitivity? Responsibility? The word eludes.

Simons’ show, which he called “Youth in Motion” and presented in a West Side warehouse space, was inspired by a pair of creative works about drug culture. The 1981 film “Christiane F.,” by director Uli Edel, who stood in the front row, the show notes tell us, “remains a cautionary tale, one that unashamedly and unapologetically depicts the realities of drug use and addiction.” The other, Cookie Mueller and Glenn O’Brien’s mid-Eighties play “Drugs,” is “another kind of cautionary tale that chronicles the ‘chemical entanglements’” of its protagonists.

In his runway rendering, Simons skipped over the cautionary part. He commissioned for his set a mise-en-scène of a Flemish still-life with a bacchanalian vibe. It featured an overabundance of floral wonders and edible delicacies — fruits, chocolates, breads — and wine bottles strewn about the floor. The models looked gorgeous, their clothes, abundantly proportioned coats and sweaters over newly skinny cargo pants, bold shots of color imbuing a chic vibrancy. Who wouldn’t want entrée to this world?

The dark subtext revealed itself via graphics: photo prints of the tragic Christiane and her cohorts, and signage. Unlike recent runway affirmations — Maria Grazia Chiuri’s “We should all be feminists” for Dior; the Public School guys’ “Make America New York” — Simons kept his signage to single words, most of the three-letter variety: LSD, 2C-B, GHB, XTC.

Fashion has long found inspiration in countercultures, and has often referenced drug cultures. But this was no “let the sun shine” Flower Power moment. Nor was it a dark portrayal featuring clothes that can transition elsewhere. Hedi Slimane’s dower looks for Saint Laurent, for example: Take the baby-doll dress and skinny jeans off the drugged-out-looking girl and boy, and the clothes turn less ominous. But a vest that says “Drugs,” as one did in Simons’ show, is a vest that says “Drugs.”

Especially given current cultural sensitivities, a moment when everything feels so loaded, this show seemed oddly tone-deaf (not to mention too self-conscious in attempting subversion). In the broad sense, there is an opiate addiction crisis in the U.S. and around the world. Industrywide, fashion is fixated on wellness — model age, model weight, creating safe work environments. One assumes that Simons’ models are all legal adults, at least of voting (if not drinking) age. Did anyone check to confirm? Even if all are twentysomething, would any have felt comfortable voicing a reservation about being a walking billboard for addictive drugs? Did anyone on the Simons or agency side bother to ask?

Yes, fashion can address social issues. It can tell stories, too, but not in the manner of a film or stage play. “Christiane F.” offers a gritty, realistic portrayal of addiction. Simons’ “Youth in Motion” was a glamour parade, populated by beautiful people and set in a life-sized Flemish painting. Actual drug addiction is typically less picturesque.

Then there’s that name, “Youth in Motion.” We don’t have to surmise that Simons is chasing the Millennial set here; his title tells us, and in the movie, Christiane is 14. Designers have always gone after the youth vote, when young themselves, from a place of demographic communion, and later, by watching, listening and reacting. That’s all great. But what is the role of adult responsibility here? That’s an ethical question.

Worth consideration as well: the commercial question. Raf Simons is the voice and face of the Raf Simons brand. He is also the voice and face of the Calvin Klein brand. The latter ascended to the heights of fashion fame on the multiple strengths of design, marketing and controversy. But that was a cultural lifetime ago. Today, Simons has returned the luster of cool to the Calvin Klein brand, but until further notice, most of the money made under the Calvin Klein label is from its underwear and jeans, and from licensees including Morris Goldfarb’s G-III and Coty Inc. Will those consumers make the connection to Simons’ drug messaging for his own brand? If yes, will they care?

Back to the show notes, on the fashion level, the collection “contrasts the volume and extravagant materiality of couture…with the more utilitarian manners of pocketed ‘space’ pants and hooded tabards with their indexical narcotic references.” Going deeper, the event sought “to neither glorify nor condone the culture(s) of drugs; rather…opening up a more nuanced dialog around the implications for a society where addiction and the causes of addiction remain largely taboo subjects, with — as both Christiane F. and the current opioid crisis demonstrate — often untold human consequences.”

Really? If someone came to pick up your daughter or son for a date wearing pants with a knee patch flashing “GHB” (the club kid/date rape drug), would you say, “young man, let’s engage in a nuanced dialogue about your pants,” or would you say, “get out of my house!”?

This collection wasn’t about forging serious nuanced dialogue about a life-and-death issue or anything else. It was about doing what so much of fashion does so often these days, at times with the aforementioned nuance, and at times, as here, with shameless transparency: chasing cool.