Outside of Hollywood, where the awards shows have serious business implications, awards season is about fashion, and that fashion has become a bore. 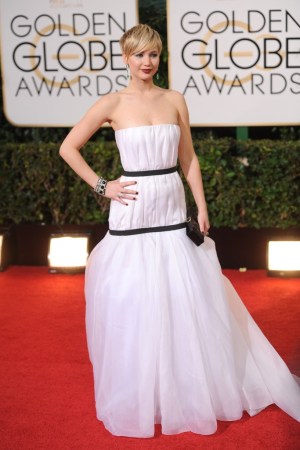 I have a big date on Sunday. With my television set. Much of my weekend will revolve around television, as the NFL post-season is in full swing. Sunday afternoon/early evening is the point of collision. The game most important to me, Broncos-Colts, kicks off at 4:30 p.m., which puts its fourth quarter in conflict with Golden Globes arrivals. I’m torn only professionally. Personally, there’s no question of which appeals to me more.

Awards shows and football — there are similarities. The drama of competition, unknown outcome and live performance — who will handle the job brilliantly and who will mess up? But the competitive drama of the awards shows is seldom compelling, and knowledge of the outcome, no more than a tweet away once the envelope for this or that award has been opened. Outside of Hollywood, where the awards shows have serious business implications, awards season is about fashion, and that fashion (I use that hallowed word oh-so-lightly) has become a bore.

This is one of my broken-record fashion topics. The safety and monotony of most red-carpet fashion makes for unsatisfying entertainment, yet I understand why most actresses dress the way they do. They’re dressing for a mass global audience, and much of that audience clings to visions of Old Hollywood glamour as the template for currency. The increasing viciousness of the real-time and post-mortem reporting has just about extinguished any sense of daring. This started to happen years ago; I trace the start of the Age of Dull to Joan Rivers’ take on Nicole Kidman in one of the most glorious dresses John Galliano ever made for Dior, a green satin Chinoiserie-embroidered column with mink-trimmed slit. Rivers said, “There goes Nicole Kidman in the ugliest green you’ll ever see.” I probably emphasize that moment too much; but in my mind, it was a watershed. The advent and explosion of social media have only strengthened the inclination to play it safe.

Again, I don’t blame the actresses. They are real people with insecurities just like the rest of us. They don’t want to be trashed in real-time or the future by acerbic one-liners. But increasingly, I wonder, what’s in it for the fashion brands? The common wisdom has long been that it’s all about the marketing opportunity, particularly Oscar night, with the eyes of the world focused on Hollywood. Whatever brands are worn by the winners and “It” girl presenters will be radiated around the world, tweeted and Instagrammed, etc. A win-win for everyone.

Certainly the women wearing the clothes win — at least the ones whose looks are reviewed favorably. It’s unlikely any will be cited for fashion daring, but for most, that’s not a goal. The goal is to look and feel beautiful rather than interesting, and to have viewing critics — professional and couch-potato alike — agree. On Sunday night at the Globes and on through to the Oscars, many women will turn up looking generically lovely. And that is an essential function of fashion — to help women look and feel what we consider our best.

On a purely creative level, however, when it comes to the red carpet, why is it a win for a major fashion house to be cited for producing a pretty, mundane dress that looks interchangeable with other pretty, mundane dresses produced by other major houses? No one can deny that reality. Just recall the year of Les Miz, when Anne Hathaway made an 11th-hour choice to wear Prada over her originally planned Valentino. Reports swirled that she made the switch because her Valentino was a sparkly-embroidery-on-nude affair that looked (or sounded as if it looked) very similar to costar Amanda Seyfried’s Alexander McQueen. Hathaway thus chose Plan B, a lovely enough dress, but with none of the fearless bravado that makes Prada, Prada.

A different issue: When an actress commissions a look that doesn’t reflect the current brand ethos. Exhibit A, Jennifer Lawrence. Beautiful young woman, maybe the best actress of her generation and one of the most popular anchors of the biggest young adult franchise there is. She is also a Dior “brand ambassador.” Read: On the payroll. So what? While the fashion industry knows Lawrence is paid to wear Dior, most of the millions of television viewers don’t know and wouldn’t care. Typically, Lawrence meets and exceeds the mass-viewer population standard; she wears a lovely classic/retro Dior ballgown, her hair in a lovely classic/retro updo, the epitome of classic/retro Hollywood glamour.

In all cases (Hathaway’s Prada turn and Lawrence’s multiple Dior turns) the women looked mainstream beautiful. They played to the television audience and don’t-rock-the-boat critics, and got high marks overall. (Lawrence did take some inexplicable heat for her 2014 Globes gown, a white gown with two black ribbons circling the torso rather than one.) But what did the houses get out of it?

What did Prada get out of being the highly reported second choice? I love Anne Hathaway, I think she’s a terrific actress, and from all accounts, a lovely person. But Miuccia Prada is a bigger star in her world than Hathaway is in hers. Yet word got out that for this event, Prada was the understudy.

As for Dior and its creative director Raf Simons, a consummate modernist, they are trying very deliberately to transition the house image to one more obviously modern that the traditional perception. What do they get out of Lawrence’s ultraconservative dress choices? Yes, her brand ambassadorship associates Dior with the hottest, coolest young actress on the planet. But the fashion image she chooses to project is at odds with the brands’ desired modernist revision. (Imagine Lawrence in one of Simons’ pre-fall Space-Age evening looks with a bustier or jumper over a sparkly turtleneck — she’d look amazing.)

So what do these houses get out of their red-carpet obsessions?

Years ago, the actress-of-the-moment asked a particular designer to make her Oscars gown. She knew exactly what she wanted, which couldn’t have been further from the designer’s aesthetic wheelhouse, so the request was declined. The designer later told me that decision was a mistake, that the marketing value would have been worth the lapse in consistency of message. Perhaps so. But that was a long time ago.

Today, that approach probably still holds for small brands — anything to get the name and some impression of image, however diluted or inaccurate, out there and associated with Hollywood’s finest. But at this point, with luxury brands now oversaturated in countries that 10 years ago were emerging markets, do brands need the Oscars and Golden Globes to up their fashion Q ratings? Is the image of Dior or Chanel or Prada or Valentino impacted in any way by even the most glamorous “get” during awards season? I’m not big on analytics — certainly fashion at the creative side is an emotional discipline — but one must wonder what fuels this particular product-placement frenzy among the highest echelon of fashion. Does anyone look at ROI in a serious way? Is there a measure for doing so? Is landing a commissioned gown — one not representative of a brand’s aesthetic and that’s generic enough that it could have been produced by perhaps 10 other houses — worth the time, attention and cost?

Not long ago, the automatic answer was “yes.” No matter how dull the entertainment factor of the actual show, no matter how unimaginative most of the fashion, there was a clear marketing value. Now, however, the Awards Show System has begun to parallel the Fashion Show System — a process that feeds on itself, embraced with gusto and participated in voraciously merely because it’s been done that way for a while. If the bottom-line results were there, who could argue? Who cares about my particular viewing pleasure or disappointment? But today, luxury is in global decline and women’s apparel sales are in decline. (Couture may be strong, relatively speaking, but no one can argue that what happens on the red carpet fuels couture sales; for women spending a fortune on a dress, overexposure on a celebrity is more of a liability than asset.) One could infer that maybe it’s time to re-examine this massive industry-wide marketing endeavor. Does it still work? Is it a waste of time, effort and resources, or worse yet, does it distract from more important matters of business?

In the meantime, on Sunday night, some of us may not switch in haste from CBS to E!

Fashion and the world lost a gem of a lady when Mary Ann Restivo passed away this week. Her death came as a shock; often one hears about a member of the industry who has been sick, but there had been no word.

I can’t claim to have been a close friend of Mary Ann’s, but she was one of the first designers I met. She was, from the start and remains to this day, one of my most favorite people in fashion. It didn’t take her death for me to so conclude; I’ve told that to many people on many occasions. I had one job prior to WWD, in the New York office of the California Apparel News Group, a scrappy organization that launched many careers on a nose-to-the-grindstone philosophy. Fresh out of school and the lone fashion reporter in the three-reporter New York office, I was charged with developing contacts across all markets. The Apparel News was neither a must-read nor a must-court vehicle for the designer faction, a fact made clear to me often enough when trying to book appointments and procure show invitations. Not when I called Mary Ann Restivo Inc. Mary Ann was immediately welcoming and gracious, helpful to a young editor who knew nothing about anything. She treated me then the way many others did when I came to WWD. At Mary Ann’s funeral on Thursday, similar comments were common: Kind, generous, never an ill-word spoken.

Early during Mario Cuomo’s governorship, Mary Ann met Matilda Cuomo at an event and handed her a business card. What began as a designer-client relationship would develop into a deep, lasting family friendship. Mrs. Cuomo and her daughter Margaret both spoke at Mary Ann’s funeral. After, outside the church, Kenneth Cole told me that Mary Ann’s husband, Saul Rosen, attended the governor’s wake just hours after his wife’s death. Margaret told of how Mary Ann planned certain elements of her funeral, including the vibrant pink roses from Zeze. My mind went immediately to a charming item I have designed by Mary Ann — a black chord choker punctuated by a pink rose. (Several years after her ready-to-wear house closed, Mary Ann went back into business designing accessories.) Also at Mary Ann’s directive, Mrs. Cuomo read the Prayer of St. Francis. “Make me an instrument of thy peace…it is in giving that one receives.” Not to go all religious, but this lady lived it. Rest in peace, Mary Ann.