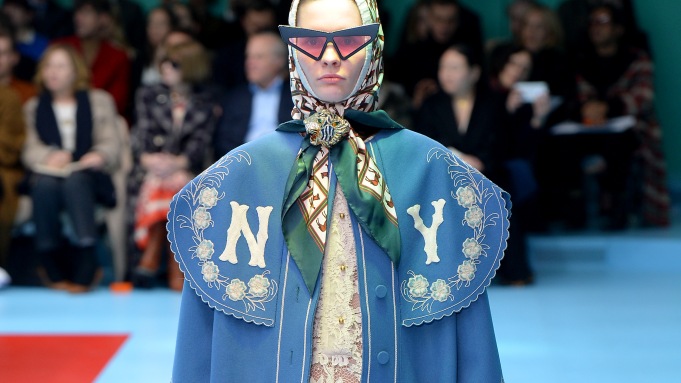 Today is Major League Baseball’s Opening Day, the first such day in 50 years when every club — weather allowing — will be in action. Semi-obsessed with Gucci’s brilliant collaboration with Major League Baseball, which debuted for pre-fall with zhushed-up caps and erupted in full-flower eccentricity on Alessandro Michele’s fall runway, I sought an interview about it with MLB. I asked for the baseball person who gave the project the green light but would have settled for any executive knowledgeable about the deal. Amidst the endless litany of fashion collaborations, usually major brands seeking street cred by hooking up with the hot streetwear or athletic brand du jour, Michele, he of the oft-worn Yankees cap, secured the use of the logos of several teams, including the Yankees, Pittsburgh Pirates and San Francisco Giants. What the teams’ role or level of cooperation is, I don’t know. That would have been a question.

The point of the story: Fashion’s six-billion-euro bastion of beautiful, out-there, off-with-their-heads wonderment consorting with an American institution grounded in (some would say, shackled by) tradition, yet now enjoying a spectacular youthquake driven by a host of engaging, personality-rich young stars. (That the game at the kid’s level offers a safer alternative to football probably doesn’t hurt, either.) There’s a high interest factor to such unlikely entities coming together for the greater good of making luxe merch that achieves a near impossible fusion of amusement, cool and chic. A fun piece to run today, or so I thought.

Until I was stonewalled. Michele “wouldn’t be available for comment.” More surprising, I was told by representatives of Gucci and MLB that the latter is contractually prohibited from speaking about the deal. Contractually prohibited? Is Stormy Daniels involved? Two for-profit, marketing-mad institutions ink a deal for the sole purpose of making expensive merch to market and sell, and neither will talk? One won’t, one can’t?

Someone floated the idea that “maybe to talk about something cool makes it not cool.” That implies that there will be a run on really expensive scallop-caped, pastel Pilgrim coats emblazoned with a retro “NY.” This side of Jared Leto, probably not.

The gag-order element of the deal illustrates dramatically the intense cultural power of Gucci, a fashion behemoth with revenues not all that far behind MLB’s, which were $9.5 billion as of 2016. Michele’s baseball merch looked great on the runway, the logos on unexpected items making his fabulous, peculiar fall 2018 show all the more so. But it’s unlikely that the majority of people who will pass through ballpark turnstiles today, this weekend or throughout the season are aware of the collaboration. Even if they are, Gucci is not co-branding team merch for sale at stadiums, according to the MLB rep. So why kowtow to Gucci’s demand for silence? If baseball can’t spread the word about its newfound luxury-sector appeal, what does it get out of the deal?

The case provides as well yet another example of a fashion powerhouse determined to control brand messaging to a bizarre degree, at least the messaging transmitted by traditional press (social media being a different animal). Reporters face rejection constantly; it’s part of the job. When investigating leads and rumors, following up on bad results, reporting on scandals, etc., “no comment” and “could not be reached” are standard responses, while more aggressive p.r. attempts to run interference are not unusual — sometimes inclusive of deft (or not) threats regarding future access. But let a brand have a minor launch, a minor store opening or an image-boosting charity fete, and they’re all over you. Increasingly, brands see journalistic entities as part of their marketing and p.r. strategies; they want the stories they want when they want them, the heck with journalists trying to do our jobs.

In fashion, the media-as-mere-marketing tool has crossed over to folly, with brands often delivering parental-like because-I-said-so “no’s,” even when to do so makes no sense. Pre-season photos — usual unremarkable pictures of unremarkable clothes — are “embargoed” until after the main-season collection hits the runway; paid celebrity ambassadors hawking this or that initiative offer vapid brand-affinity p.r. statements rather than deigning to get on the phone for five minutes. Now, Gucci contractually restricts a partner from speaking about a merch deal for what would have been a lighthearted feature story. As for the why — no answer.

On Sunday, I was at Gucci in Trump Tower buying gifts — a butterfly ring for a niece and a baby gift. The store was packed with people browsing and, better still, buying. Today, as the MLB season opens in ballparks across the country, many fans will show up in logoed merch. By mid-season, some of those fans, particularly those in the tony box seats, may wear caps of the Gucci pre-fall sort. Shhhh. Don’t tell anyone.