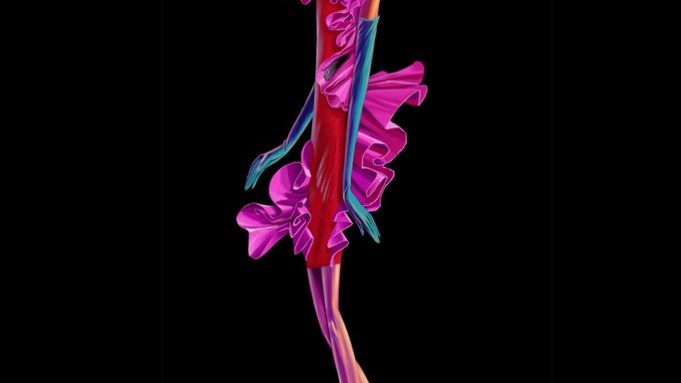 Are we at the end of fun? Is common sense an anachronism? Must everything, no matter how benign the reality, be dissected and politicized beyond reason?

Last week WWD reported that for its upcoming holiday windows, Barneys New York is collaborating with The Walt Disney Company on “Electric Holiday,” one element of which is a short animated film. The ruse: Minnie Mouse’s fantasy of walking the Paris runways with some BFFs. As reported, Minnie will wear ruffled Lanvin; Daisy, racy lace Dolce & Gabbana, and Goofy, military-inspired Balmain.

Proportionally speaking, Minnie will look less like her famously short, squat self and more like Karlie Kloss on Halloween, which is to say, ridiculously elongated and oh-so-thin.

Cue the outrage. Comments on WWD.com and Disneyliving.com ran overwhelmingly against the reimagining of Minnie as a haute (if still large-eared) beanpole silhouette. (A side issue: Some of the outraged should consider spending less time incensed and more time proofreading.)

Full disclosure: I’m not just a fashion writer with an opinion on this project; unless edited out, I will be a caricatured audience member in Minnie’s runway reverie. When Barneys’ Charlotte Blechman asked me to participate, I offered an enthusiastic “Yes!” with a caveat, “Charlotte, don’t let them draw me fat.” Last week, when I saw the Minnie drawing, my first thought was, “God, she looks divine in Lanvin,” and my second, “if they can stretch Minnie out, they can do the same for me.”

But I digress. Most of the Skinny Minnie vitriol centers on the desecration of beloved icons while promoting unrealistic body images detrimental to young people, particularly girls. “Morally reprehensible,” admonished RNbrinker. “Disturbing…shame on you Barney’s [sic] and Disney,” wrote Guest. “If they can’t make an outfit that looks good on Minnie as she has been for the past 84 years, it doesn’t say much for the amount of skill that their designers possess,” declared Kenny Vee.

Retail windows are entertainment, with Barneys’ famed holiday windows at the top of the list. (Not to swing too un-PC, but they’re Christmas windows to me.) More often than not, entertainment depends upon exaggeration. Many of us may see our own families in “Modern Family,” but are our first-degree relatives all a quip a minute? Is New York City as riddled with violent crime as 20-plus years of three Law & Orders suggest? No and no. For that matter, don’t you think that, from Guidettes to Housewives, even reality stars ramp it up for the cameras? Minnie’s redrawn body is an exaggeration of the standard runway-model physique because exaggeration makes it amusing.

Assuming no evil ulterior motive to shame viewers into thinness — let’s give Barneys and Disney the benefit of the doubt — this project must have been intended as fun, fanciful, a little irreverent. Yet it does speak to one of fashion’s most important functions — encouraging us to dream, daring us to reinvent ourselves, if only in our own minds. Despite my (all too minimal, I fear) screen time, I have no idea about how this film will play out. My guess is that in her fantasy of hitting the runway, Minnie only imagines that she stretches up and into runway proportions. She won’t really change; she and Daisy will remain the realistic short, round, adorable, talking, hair-bow-wearing rodent and fowl we all know and love. Let the mouse dream! Look at it her way: beloved by generations; every child’s friend. Yet when the preschool set shows up on her home turf, a Disney theme park, how are the little girls dressed? As Minnie? Daisy? Not likely. You can bet your mouse ears that most emulate those Princess bitches. What do they have that Minnie doesn’t? A waistline and a dress (and yes, a sob story). The critics would deny Minnie the joy of trendsetting just once, if only in her own mind.

Minnie musing aside, the angry reaction again puts fashion in the role as villain, here conspiring with big business to impose impossible standards on impressionable, apparently fragile girls. (A tad insulting, no?) The notion would stretch credulity even if children were the primary targets; Minnie fantasizes about going to Paris, not Behind the Green Door. Parents fearful their little ones might be damaged by glimpsing her fashion film in the store window can always cross the street.

We all want our children to grow up happy, healthy and with positive self-images. But while encouraging a child to think well of her- or himself, should there not be room for a reality check — one Minnie might help express?

The Genetically Blessed have always walked among us; they will always walk among us. (And their lives aren’t perfect — just ask Robert Pattinson, and on the brainiac side, Mark Zuckerberg.) Try as we might, we cannot shield ourselves or our children from the GBs forever. Prom queens and big men on campus; alpha girls and dreamboats, they’re out there in our world — their status derived at least in part from their looks. Some are blessed enough to parley their physical attributes into fame, fortune and fabulous careers. (See: Gisele Bündchen; LeBron James.) What can the rest of us do but turn hermit or learn to deal.

Fashion and entertainment have never been bastions of ordinary, whatever the aesthetic of the moment (see: Dovima; Marilyn). Yet the “body-image” outcry is a recent phenomenon, fueled in part by the ease of marshaling constituencies online. Yes, we know more today than ever before about the child and adolescent psyche; yes, eating disorders are more of a problem now than ever. But can’t the same be said of the message to our children that they are the most fabulous they can be in every way, and that any suggestion to the contrary is crippling and insulting?

Why can’t Minnie dream herself lanky? It’s only wrong if she comes back to reality and swallows cyanide in despair. What if she wakes up and says, “Short legs! Oh, well. I’m still really happy with who I am — kind and cute, with lots of people who love me.” What’s wrong with sending that accurately mixed message to kids? “You know what, Sally, Suzie, Timmy, Tom, you are wonderful; the world is your oyster. But you will not always be the best at everything. Chances are excellent that in your lifetime, you will encounter people who are smarter, wittier, more industrious and yes, more graceful, athletic, thinner, maybe even prettier, and sooner or later, younger, than you are. That, dear child, is called life.” Minnie gets it, and we should, too.